An American aviation company claims to have designed an ultra-efficient plane that could someday make the cost of private flights comparable to flying commercial.

Otto Aviation says it’s completed 31 successful test flights of its new Celera 500L, a.k.a the “bullet plane.” According to the company, the plane features seats for six passengers, a 4,500-nautical-mile range and a top cruise speed of 460 miles per hour. That means it could fly nonstop from New York City to Los Angeles in about the same time as a conventional private aircraft.

But most notable is the low flying cost of $328 per hour. Compare that to the $1,300 to $3,000 hourly cost you and several friends would currently pay to charter a private jet.

How is the price so low?

It’s mainly because of the plane’s unusual shape. The cylindrical fuselage is especially aerodynamic because it maximizes laminar flow. Laminar flow occurs when air flows smoothly over an aircraft’s wings, which reduces drag and boosts fuel efficiency. 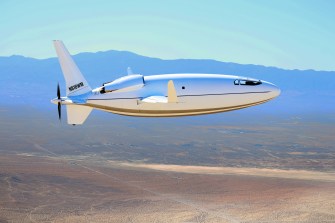 Otto says the Celera 500L requires about one-eighth the fuel of a conventional jet.

“The design of the Celera fuselage takes advantage of an optimum length-to-width ratio to maximize laminar flow,” Otto Aviation wrote on its website, adding that the design results in a 59-percent reduction in drag compared to similarly sized aircraft. “These benefits will not scale for large jet transports and are therefore well suited for an aircraft like the Celera.” 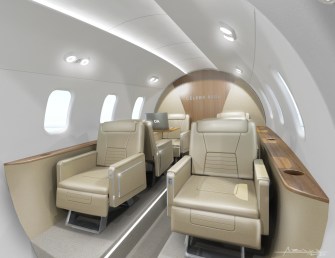 “We believe the Celera 500L is the biggest thing to happen to both the aviation and travel industries in 50 years,” William Otto Sr., the Chairman and Chief Scientist of Otto Aviation, said in a statement. “Beyond using our aircraft for passenger travel, it can also be used for cargo operations and military applications. Since the results from our prototype test flights have been so promising, we’re ready to bring the Celera 500L to market.”

The company hopes to deliver the Celera 500L to market around 2025, pending FAA certification. If successful, manufacturers like Otto Aviation, Transcend Air, and Airbus could usher in the era of air taxis, where people hail aircraft like they do taxis or Ubers. Paris, for example, was planning to have flying taxis in time for the 2024 Olympic Games, though it’s unclear whether the pandemic will affect the project.

As far as how COVID-19 has affected the launch of the bullet plane?

“We didn’t anticipate Covid-19,” Otto told CNN. “But there are enhanced market opportunities in being able to afford to fly with only those you choose to. Being able to avoid crowded airports and lines is another big benefit. […] In many cases, individuals and families will be able to charter the Celera 500L at prices comparable to commercial airfares, but with the convenience of private aviation.”

Philosophers and scientists spent millennia arguing about the nature of light. It turned out to be stranger than anyone imagined.
Hard Science

Surrounding Earth is a powerful magnetic field created by swirling liquid iron in the planet’s core. Earth’s magnetic field may be nearly as old as the Earth itself – and […]
Hard Science

This everyday electrical phenomenon had no widely accepted scientific explanation — perhaps, until now.
Up Next
Health

Cultivating optimism is a daily practice.