As of July, 44 percent of adults in California exhibited levels of mental health duress typically associated with clinical definitions of generalized anxiety disorder and major depressive disorder. That’s only three points above the U.S. average this year. Research from early 2019 pinned that number at 11 percent—a quadrupling of distress.

There’s no single answer for dealing with the gravity of this moment. Every little bit helps. As noted yesterday, training yourself to be more playful has been shown to increase well-being. Below are six other means for cultivating optimism during troubling times.

No one method will change everything, yet perhaps deconstructing 2020 piece by piece, and implementing small changes, will have a holistic effect on your emotional and mental health.

Don’t Think Too Much – Alan Wattswww.youtube.com

In his book, “Deep Work,” Georgetown computer science professor Cal Newport writes that knowledge workers spend an average of 60 percent of their work week communicating electronically, with up to 30 percent of their time devoted to answering email. Spending this much time in “frenetic shallowness” permanently reduces your ability to perform deep work and enter flow states.

Quick email and social media checks negatively influence attentional capacities, leading to poorer work performance, job enjoyment, and life satisfaction. Newport’s advice? Learn to focus and segment your time better. For example, he only checks email once daily, and only during an assigned period.

“If you give your mind something meaningful to do throughout all your waking hours, you’ll end the day more fulfilled, and begin the next one more relaxed, than if you instead allow your mind to bathe for hours in semiconscious and unstructured Web surfing.”

Kelly McGonigal doesn’t focus on the negative impact of stress. The Stanford health psychologist understands the dangers of excess anxiety, but she’s also aware that treating stress as a physiological phenomenon allows you to tap into an abundance of energy. Stress is a response, as is how you respond to stress. Reframing is therapeutic.

In “The Upside of Stress,” McGonigal asks you to reframe your stress response—make it a challenge response. Use your body’s chemical surge as a catalyst for transformation instead of getting weighed down by the content that triggered the reaction.

“Stress can create a state of concentrated attention, one that gives you access to more information about your physical environment … One of the effects of the biological stress response is to make you more open to your experience. You feel things more, and your ability to notice expands. You are more sensitive to other people and to your environment.”

In “Tao: The Watercourse Way,” the philosopher Alan Watts asks if a long life is worthwhile if you spend every day in constant dread of a tomorrow that never arrives. Constantly yearning for satisfaction guarantees you’ll never feel sated. Watts was a master of paradox. He knew what we chase always eludes our grasp.

His solution? Stop chasing it. You can be ambitious. Eastern philosophies don’t recommend inaction. Enduring dissatisfaction is dangerous, however. Treat every moment for what it is and suffering dissipates.

“Those who understand the Tao delight, like cats, in just sitting and watching without any goal or result in mind. But when a cat gets tired of sitting, it gets up and goes for a walk or hunts for mice. It doesn’t punish itself or compete with other cats in an endurance test as to how long it can remain immovable—unless there is some real reason for being still, such as catching a bird.” 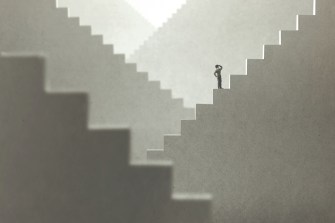 Don’t Be Afraid to Hope

Our brains perform an interesting trick, writes cognitive neuroscience professor Tali Sharot. We tend to remain optimistic about our own life while simultaneously expressing pessimism about the fate of others. Amazingly, even during a global recession, we tend to believe we’ll come out the other side in far better shape than our peers. Worrying is for someone else.

Optimism bestows a competitive advantage. We’re biologically designed to believe tomorrow will be better than today. How else would a relatively slow and feeble ape rise to the top of the animal kingdom? In “The Optimism Bias,” Sharot writes that we overestimate potential windfalls while underestimating negative consequences. Sure, we might be wrong sometimes, but this mindset is actually healthy.

Emily Esfahani Smith writes that Kant would push back on the modern notion to “do what you love.” Life is not about chasing every passion, but understanding how to best contribute to the world. That begins with you assigning meaning to your life.

Sadly, that’s not the case for many Americans. In “The Power of Meaning,” the writer points out that 40 percent of adults cannot express a satisfying life purpose. Roughly 100 million Americans live without a strong sense of meaning. Perhaps part of the problem is the relentless chasing after passion. Thankfully, meaning is something we can strive for and implement whenever we desire.

“Most of our goals are mundane and immediate, like getting to work on time, going to the gym, or doing the dishes. Purpose, by contrast, is a goal toward which we are always working. It is the forward-pointing arrow that motivates our behavior and serves as the organizing principle of our lives.”

Americans spend more time driving around in cars than sharing a meal together, writes neuroscientist Peter Whybrow in “The Well-Tuned Brain.” Sheltering at home has offered us a chance to return to the kitchen, yet for many being trapped indoors has resulted in the consumption of more processed foods and takeout meals.

As Whybrow writes, food production is more about “profit rather than palate.” We know more than ever about micronutrients and health yet spend less time enjoying the benefits of a great home-cooked meal. Science is useful provided it doesn’t usurp ritual. Get your hands dirty and your mind occupied with the greatest transformation humans have ever conducted: a meal designed from the raw ingredients of nature.

“Medicine and cookery evolved from the same body of wisdom, where pleasure and health were considered mutually reinforcing around the consumption of good food.”

Metabolism and mitochondrial functioning seem to have far more to do with mental health than many people might expect.
Up Next
Starts With A Bang

The First Clock In America Failed, And It Helped Revolutionize Physics

The pendulum didn’t tick right when they brought it here: the start of a fascinating story.For nearly three full centuries, the most accurate way that humanity kept track of time […]