In a new meta-analysis of ten studies, probiotics are proving useful in decreasing symptoms of anxiety. 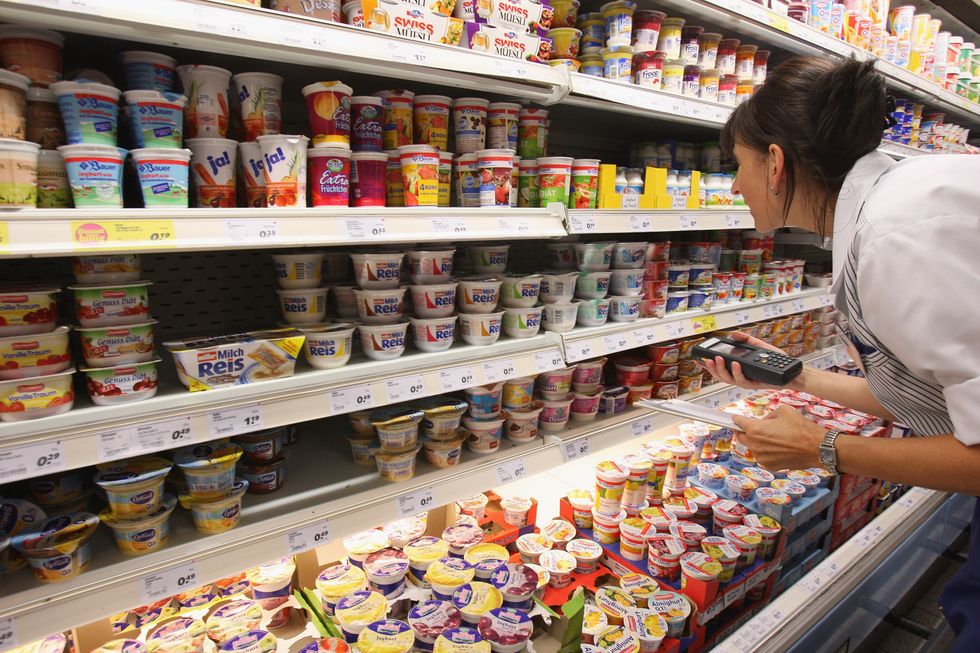 A worker checks inventory of yogurt containers on a supermarket shelf July 30, 2007 in Berlin, Germany. German milk producers have announced they will raise prices on milk and dairy products starting July 31 nationwide by as much as 50%. (Photo by Sean Ga

Our stomach is a fascinating place. With all the advancements being made in neuroscience, the complexities of digestion have not been well understood, the dark matter of our body’s galaxy. That is changing, quickly. Part of the challenge is complexity: there are 100,000 times more microbes in your gut than humans on this planet, writes Emeran Mayer in The Mind-Gut Connection. There are also more immune cells inside of our stomachs than in blood and bone marrow, which makes what we put into our mouths so important. Our diets might affect our brains more than the other way around. As Mayer puts it,

Your gut microbes are in a prime position to influence your emotions, by generating and modulating signals the gut sends back to the brain.

Humans are collectively experiencing increased rates of anxiety, which is now the planet’s most pervasive psychological disorder. Increased stress has numerous destructive tendencies in our guts, including the alteration of contractions, transit rates between our stomach and large intestine, and blood flow. When that blood is transporting extra cortisol due to an increase in our corticotropin-releasing factor (CRF), the result is increased storage of visceral fat, decreased function of our immune system, and, of course, anxiety.

While there are a number of means for altering your gut environment—a healthier diet with less sugar; stress-reducing techniques like meditation; regular exercise; therapy—one of the most prominent is the intake of probiotics, as new research published in Neuropsychiatry (London) shows.

Our guts are filled with microbes. I remember my high school biology teacher trying to gross us out by informing us that if she were to zap us so that only living microorganisms would remain, a few pounds would end up next to each of our desks. Turns our these critters are necessary for survival; how we treat them affects how they treat us.

Probiotics are, in the words of the World Health Organization, “live micro-organisms which, when administered in adequate amounts, confer a health benefit on the host.” In 2010 the organization began developing guidelines for probiotics in food, which is tricky for a number of reasons. First off, each host has a different gut environment; what works for you might not work for me. Second, dosage amounts are also relative for each host. Constructing widespread guidelines on what needs to be individualized prescriptions is challenging. Thirdly, the FDA is notoriously inefficient when screening health claims. There’s a world of difference between refrigerated and room temperature probiotics, one that extends well beyond price. Yet this barely-regulated industry is difficult to navigate. Stated benefits exceed actual benefits, as often happens with medicine masquerading as nutritional supplements.

The research team above, led by Ruixue Huang at the Xiangya School of Public Health in Hunan, China, searched seven academic databases and chose ten studies that showed probiotics’ efficacy in reducing anxiety. Importantly, the team recognizes crosstalk between gut and brain:

The gut-brain relationship is bidirectional, meaning that changes in microbial flora can affect behaviour, and behavioural changes can affect the gut flora.

The team had been searching for a meta-analysis on probiotics and anxiety disorders, which they were unable to find. Their requirements included studies on human subjects with anxiety disorders, a variety of probiotic sources (fermented yogurt; powders; oil suspensions; capsules), and studies from unique test groups, to avoid overlap. They did not include studies on mice and rats, case reports, or incomplete data.

Huang’s team collected research from Japan, Spain, Ireland, Iran, the UK, Sweden, France, and Canada, all of which showed beneficial effects from a variety of probiotics, including popular and readily available strains such as Lactobacillus acidophilus and Lactobacillus casei. A total of 660 human subjects were included in their final results:

Meta-analysis results indicated that probiotics significantly decreased anxiety compared to controls. These results are consistent with some previous studies showing that probiotics on anxiety are effective.

As Mayer concludes in his book, however, there is no “one-size fits all recommendation” for probiotics. He continues,

We cannot expect that any simple intervention by itself, such as a particular diet, will optimize your gut microbiome, while not paying attention to all the other factors that influence gut microbial function, like the influence of unhealthy gut reactions associated with stress, anger, and anxiety at the same time.

So while probiotics might not cure your anxiety in one shot, they can play an important role in the process. Understanding strains and dosage is an exciting field of research that is certain to yield critical advancements in the near future.