Dyslexia is a frustrating condition that affects up to 10 percent of the world’s population. Although there are three million reported cases each year—up to 7 percent of school children have persistent difficulty learning how to read—there’s no known cure. Some research even suggests that up to 17 percent of the population could suffer from mild symptoms.

While dyslexia runs in some families, the disorder is generally considered to be caused by the interaction of genes and environmental factors, including parental education and teaching quality. It appears that learning in supportive environments reduces the risks of turning on genetic factors associated with the disorder.

No specific cause of dyslexia has been discovered, although the condition was first identified in 1881. Traumatic brain injuries sometimes cause it. The condition is also linked to ADHD, issues with hand-eye coordination, and developmental language disorders.

Researchers have figured out that dyslexia is related to problems with language processing. The condition is diagnosed through a series of memory, spelling, and reading tests. Since other disorders make reading difficult, identifying dyslexia takes time.

A new study, published in PLOS Biology, reveals fascinating data about a possible treatment for this longstanding disorder. As mentioned, the strongest evidence for an origin is in the brain’s processing of language sounds—in the left auditory cortex.

A research team at the University of Geneva applied 30 Hz (“low-gamma”) oscillations via transcranial alternating current stimulation (tACS) to 30 volunteers. Fifteen were dyslexic; the other 15 were fluent readers. Previous theoretical models suggested 25-35 Hz could be beneficial, though only correlations have been offered. 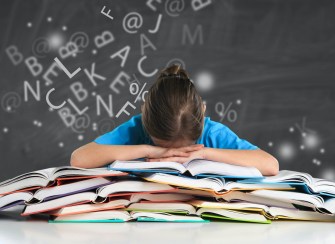 The beneficial effect wasn’t noticed when 60 Hz was applied.

The authors believe this research demonstrates a causal role of low-gamma oscillatory activity in the brains of dyslexics. More importantly, their work could lead to non-invasive therapeutic interventions for treating (and perhaps curing) the disorder.

Co-lead author Silvia Marchesotti, in the Department of Neuroscience at the University of Geneva, says,

“The next steps for us are to investigate whether normalizing oscillatory function in very young children could have a long-lasting effect on the organization of the reading system, but also to explore even less invasive means of correcting oscillatory activity, for instance using neurofeedback training.”

One session of tCAS lasts for hours or even days—not long enough to ensure long-term change. The authors suggest multiple sessions might inspire long-term potentiation in dyslexics, however.

They also point out that tACS improved reading accuracy but not reading speed. Future studies could include multiple sessions to discover if reading speeds can be increased.

Your eyes are playing tricks on you.
Videos

There are two kinds of suffering. One is pure pain. The other makes life worth living.
▸
6 min
—
with
Paul Bloom
Up Next
Health

The images were published in the New England Journal of Medicine and show how prolific coronavirus can become in a mere four days.