Out of all the unforgettable lyrics by The Beatles, George Harrison’s line, “Ah, look at all the lonely people,” is one for the ages. How could you possibly live in a city surrounded by millions of people and be lonely? The paradox is stunning.

The world has changed quite a bit since 1966. Social isolation has gotten worse due to electronic communications—another paradox we must contend with. Loneliness is a leading indicator of depression; rates of anxiety and depression are quadruple 2019 levels. The pandemic has exploited a worrying trend.

Sadly, twenty-somethings appear to be suffering the worst, a trend that was in progress before lockdowns began. Children are also suffering. A recent report from the Anna Freud National Centre for Children and Families suggests that children might be suffering from PTSD due to quarantines.

We know isolation is especially damaging during childhood. Being separated from their peers predicts that children will have a difficult time acclimating to social situations as they age. A new study, published in Nature Neuroscience, has discovered the neural circuit mechanisms responsible for this phenomenon—in mice, at least.

A team at the Icahn School of Medicine at Mount Sinai identified brain cells in the prefrontal cortex that regulate social behavior as being responsible for also regulating social isolation. This particular role was previously unknown.

Male mice were isolated for two weeks. The researchers, led by senior author Hirofumi Morishita, Associate Professor of Psychiatry, Neuroscience, and Ophthalmology, noticed the mice were unable to activate these medial prefrontal cortex neurons after spending an extended period of time alone. They could no longer be social, even after being weaned back into society. 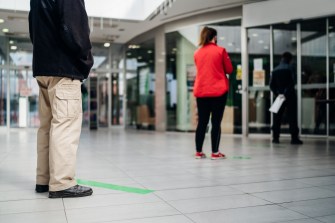 The team used optogenetics (the use of light to control neurons) and chemogenetics (non-invasive chemical control of cells) to reacclimate the mice. As Morishita explains,

The team writes that childhood may be a particularly sensitive time for behavioral plasticity. Once the mice become accustomed to social isolation, they may not learn the skills necessary for readjusting their social strategy later in life. They believe this is the first time the exact neural mechanisms for this process have been identified.

Of course, neurological correlation is not causation. Being alone is the condition that turned these neural connections off. That said, understanding the neuronal correlation could result in new therapies.

If this research can be replicated in humans, the team believes therapeutic interventions for autism and schizophrenia, disorders that involve difficulty with social integration, may be on the horizon.

As the team concludes, since these cells appear to be sensitive to “experience-dependent modulation, they are promising targets for treatments of social behavior deficits associated with psychiatric disorders that use noninvasive brain modulation techniques such as transcranial magnetic stimulation and/or transcranial direct current stimulation.”

Behavioral problems are going to continue due to the current pandemic. For parents dealing with young children experiencing difficulty acclimating to these circumstances, Dr. Julie Pajek at Cleveland’s MetroHealth Medical Center suggests the following methods.

There are two kinds of suffering. One is pure pain. The other makes life worth living.
▸
6 min
—
with
Paul Bloom
Up Next
Hard Science

A rare titanosaur embryo was discovered with its skull preserved in 3 dimensions.