Even cast sterile monochrome, the pictures are spine shivering. At first blush, they appear to depict some unknown fungus devouring a sea anemone or maybe spider egg sacs infesting some poor soul’s hair. But the actual subject is far too familiar these days. Those pictures show novel coronavirus in the microscopic flesh.

Published in the New England Journal of Medicine, the images offer an up-close and far-too-personal look at lung cells teeming with coronavirus. They were produced by Camille Ehre, an assistant professor at the University of School of Medicine’s Marsico Lung Institute, and her team. They wanted to research how coronavirus occupied human airways and what happened to the inundated cells. And they vividly got their answer. 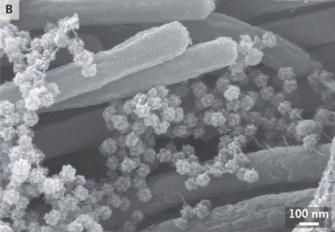 Another image of novel coronavirus. This one shows the virions 10 times closer than the above image.Credit: Camille Ehre/New England Journal of Medicine

To start, Ehre and her team exposed epithelial cells to novel coronavirus in a biosafe laboratory. Epithelium tissues are found at the barriers between the human body and the outside world, often lining the outer surfaces of organs and blood vessels. They serve many functions, including protection, fluid balance, particle clearance, and triggering immune responses. These functions make them important to the health and safety of our respiratory system.

The researchers took their epithelial cells from a bronchus, major airway passages by which air moves from the windpipe and into the lungs. The initial cells were taken from a transplanted lung and later grown in lab dishes. So, unlike your typical photoshoot or family portrait, this experiment remained ethically above board.

After exposing the cells to coronavirus, they waited for the infection to take hold. They then captured images of the epithelial cells with a scanning electron microscope, a device that uses a focused beam of high-energy electrons to produce images. They discovered a high density of virions—individual particles of the virus existing outside the host cell—had been produced and were swarming over the cells. In a mere 96 hours, virus production skyrocketed to reach a multiplicity of infection of three to one. That means there were three virions for each targeted airway cell.

“When we looked at these infected cultures under an SEM microscope, the most striking observation was the astonishing number of virions produced by a single infected cell,” Ehre told Gizmodo in an interview. “Some of these infected cells were so engorged with viruses that they rounded up and detached from the epithelium, giving the impression that they were about to burst.”

The image at the top of this article shows the invasion at one-micrometer magnification. The tentacle-looking projections are respiratory cilia, hair-like organelles on epithelium that move microbes and other debris out of our airways. That spider-web looking stuff is mucus produced by goblet cells; it’s used to trap microorganisms and protect the bronchus. Neither are effective against the locust-like plight of virions.

Above is the same scene but at 100 nanometers (10 times closer). From this all-too intimate vantage, you can clearly see the peplomers—those spiky protrusions on the virions’ envelopes. These peplomers give the coronavirus family its name as they have a crown-like appearance when viewed under such a high magnification—corona coming from the Latin for “garland or crown.”

Ask a Chemist: How does handwashing kill coronavirus? | Kate the Chemist | Big Thinkwww.youtube.com

These images are a stark reminder of why COVID-19 infections can so devastate the human body. It’s not only that our bodies serve as their viral birthing centers. It’s that we’re their all-in-one resource smorgasbord.

Because viruses can’t reproduce on their own, they have to inject their genetic material into host cells. They incorporate their DNA or RNA into a host cell’s genome, and a bouncing baby virion is born, one that often kills the host upon release. It’s basically the backstory of “Aliens” at a Lilliputian scale, and should viral proliferation spread too quickly, even our immune-responsive Marines can’t put up a fight. If enough cells are destroyed, the harm can affect the entire host organism—which now includes us.

“These images of SARS-CoV-2 infected cultures showing ciliated cells jam-packed with viruses releasing large clumps of virus particles make a strong case for the use of masks by infected and uninfected individuals to limit SARS-CoV-2 transmission,” Ehre said.

They certainly do. Warnings about coronavirus in the abstract can make the case for physical distancing, shuttered schools, and wearing stifling makes while shopping. For a while. But as we’ve seen, people will eventually tire of their social sacrifices. Perhaps the idea of the above horror show occurring more closely to home will spur us to keep up the fight and listen to the experts for a while longer.

A study finds that older adults who cannot balance on one foot for ten seconds have an 84% higher risk of death than those who can.
The Future

A “bio-battery” made from genetically engineered bacteria could store excess renewable energy and release it as needed.
Up Next
Neuropsych

Say yes to the world: On Nietzsche and affirmation

Can we affirm everything in life, the beauty and the suffering? Nietzsche says yes.