There cannot be any comparable sentence in the history of Western thought.

Although it is exactly 148 years old, to this day some still interpret it in a manner contrary to its author’s intentions. Nor can one conceal the fact that it brought him an extremely bad reputation. But meanwhile its meaning – however ominous it may sound – is actually very simple.

The sentence is: “God is dead.”

It appeared for the first time in 1882, in The Gay Science by the German philosopher Friedrich Nietzsche, one of the most important philosophers of modern times. But the world is familiar with it mainly from another of Nietzsche’s works, perhaps his most famous, written a year later, Thus Spoke Zarathustra. This very strange, poetic text, full of unusual metaphors and lyrical inspiration, predicts the coming of a new era. Its prophet is to be the eponymous Zarathustra, a figure whose name Nietzsche took from an ancient Persian priest, the creator of Zoroastrianism, one of the world’s oldest monotheistic religions. But despite the mystical aura that Zarathustra radiates, his message has nothing to do with conventional religious ideas. Quite the contrary – for he announces the death of God. And consequently challenges people to conduct a thorough revaluation of everything they think about the world and about themselves.

But what does ‘the death of God’ mean? Certainly not death in the literal sense – it is not that after aeons of existence a divine being, an old man with a long grey beard who resides in heaven, suddenly ceases to be. Nothing of the kind. The ‘death of God’ is simply a metaphor for the historical moment whose advent Nietzsche sensed perfectly in advance. The moment when religion – both as a prospect from which to perceive reality, and as a specific doctrine, in particular Christianity – was bound to undergo irrevocable disintegration.

In Nietzsche’s view, these were the ultimate consequences of processes that were set off within Western culture by the age of enlightenment. The new independence of human reason that came about at this time, the creation of the framework of modern science, the departure from the stage of self-incurred immaturity – as Immanuel Kant expressed it – led to the erosion of the great edifice of the religious view of the world. Humanity had finally produced tools that allowed it to distinguish mythology from knowledge, and by this token to unmask the claims of religious institutions and high priests. Finally it was possible to see that the power and social status they had enjoyed until now was entirely built on phantasmal foundations.

Yet in Nietzsche’s day not everyone was aware of this, or rather not everyone was prepared to take it on board. That was why a new, charismatic prophet had to appear, who – by referring to religious, prophetic symbols – would formulate something like a new gospel. And would fully express man’s situation in a world from which by now every last trace of the metaphysical had irrevocably been removed.

What is at the heart of this message? It is most fully expressed by a single word: affirmation. The person whose fortunes no imaginary providence is guarding any more, the person living in a world that was not created by any god and that no god is watching, the person now independent of all the religious institutions that disinherited him of his own power and spontaneity, the person who gets back all the wonderful features and possibilities ascribed until now to a deity – only this sort of person has a genuine opportunity to say ‘yes’ to the world, with all its original meaninglessness, chaos, cruelty and unpredictability. Because only the sort of affirmation that takes account of all this, that does not disguise its meaninglessness with mawkish stories and its cruelty with metaphysical tales of final judgement, actually deserves to be called by that name. 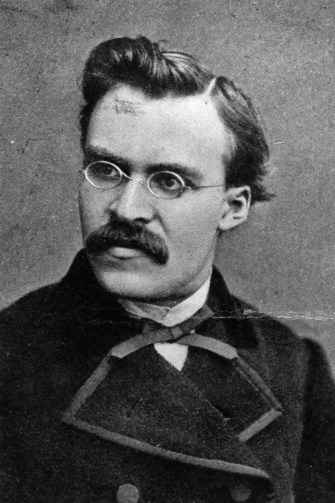 But to reach this affirmation, first a person must fully and genuinely become aware of his own situation – and draw radical consequences from it. In Nietzsche’s view, Christianity was a religion based on resentment, and thus on the sense of dislike or even envy that the weak harbour towards the strong – dislike or envy that is institutionalized, harnessed to an entire, complex mythological system, at the centre of which stands a figure of sanctified weakness, humility and modesty. According to Nietzsche, this is nothing other than a systematic means of depriving man of access to his own power, and at the same time it is the perfect way to exalt those who have voluntarily renounced this access. This form of exaltation also has a deeper sense, in that it gives the representatives of religious institutions a guarantee that the believers will be obedient to them, and by this token their position will remain unthreatened. And so the main purpose of this sort of ideology is to restrain those who could by nature pose a genuine threat to the domination of religious institutions.

Whereas Zarathustra brings a new message that allows mankind to break the chains for good and all, and to overthrow the last vestiges of the old order. Vestiges that were not so much material, as rooted in thinking and ethics based on Christian values. This is exactly what is meant by another famous Nietzschean maxim, about ‘the revaluation of all values’ – the profound revision of a moral system that, under the guise of goodness and noble-mindedness, leads above all to slavery.

In any case, the theme of an endless play-off between strength and weakness was, according to Nietzsche, central to the history of humanity long before Christianity became its dominant religion. This is superbly demonstrated by Professor Tadeusz Bartoś in his latest book, Klątwa Parmenidesa [The Curse of Parmenides]. Nietzsche had already perceived this sort of conflict within Greek culture, which for him was the basic point of departure. It was expressed in various features, including the famous division into what was Dionysian and what was Apollonian: chaos, passion and ecstasy versus structure, rationality and abstract thought.

Nietzsche viewed his own contemporary era through this same prism – as a world of people who were at a standstill, entirely cut off from any enlivening sources. Christianity was just one of many factors – alongside a taste for danger, a cult of averageness, mediocrity and general indolence – responsible for this state of affairs. In a brilliant flash of intuition, perhaps sensing in advance the radical shocks that the 20th century would bring, Nietzsche announced the need for the era of the ‘superman’ to arrive, someone who would elude all the classifications derived from the old value systems.

A few decades later, the concept of the ‘superman’ (in German, Übermensch) – although in actual fact it wasn’t entirely clear who exactly he was meant to be – would be given a nightmare interpretation by the Nazi movement, whose representatives were eager to refer to Nietzsche’s philosophy. This occurred to a vast extent because of his sister, Elisabeth Förster-Nietzsche who, as an ardent anti-Semite and nationalist, and also a member of the Nazi Party, thoroughly manipulated her brother’s oeuvre and message. The Nazi reception of Nietzsche’s texts is one of the most agonizing examples of a profoundly inadequate interpretation of a philosophical work. Nietzsche had nothing in common with the national-socialist ideology – if he had lived in the days of Hitler, he would undoubtedly have spoken of him with the utmost contempt.

“In Nietzsche’s eyes, the Nazi Übermensch,” writes Bartoś in his new book, “would have been a coward, a hidden assassin, the essence of the epitome of weakness – regrettable resentment. Moreover, if we trace Hitler’s frustrations as recorded in Mein Kampf, when he talks for instance about the Slavic threat in Austria and his other phobias, it is plain to see that this criminal was not the embodiment of strength, but of weakness, which he chose to address by conspiring, manipulating and murdering. This is a textbook example of resentment in action.”

Full affirmation of life – with its splendour and its cruelty, with everything that prompts horror as well as fascination, with passion as well as order – would not actually be full if not for one particular property of the world around us, which in Nietzsche’s opinion was also a simple consequence of moving away from thinking in terms of a deity, a final judgement or letting any other metaphysical idea dominate time and creation.

And this property is the eternal return of the same thing. The world is an eternal, but finite whole, declares Zarathustra, in which everything dies and everything is reborn. Thus inevitably, though after an unimaginable length of time, every component of the current situation, all the tiniest elements that have come together to form it, will be repeated in exactly the same way. So there will be no final salvation, liberation, or end of time. Everything will keep happening over and over again ad infinitum. We shall relive our lives a countless number of times, in exactly the same way, second by second, minute by minute, day by day.

We could of course see this as a reason for despair, but we could just as well surrender to it ecstatically. As we are doomed to it anyway, as everything is bound to be repeated anyway, why not endure it with joy and acceptance, asks Nietzsche.

And indeed – why not?

Translated from the Polish by Antonia Lloyd-Jones.

Reprinted with permission of Przekrój. Read the original article.

Tags
fearhappinessmindmoralitypersonal growthphilosophy
In this article
fearhappinessmindmoralitypersonal growthphilosophy
Related
The Learning Curve
5 Stoic quotes to help you through difficult times
“We suffer more often in the imagination than in reality.”
Thinking
6 great philosophers and how they used their political power
Most philosophers merely contemplate the world, but what about the ones who actually tried to change it?
Thinking
Finding your essential self: the ancient philosophy of Zhuangzi explained
Adopting a healthy scepticism towards inherited ideas means “emptying the container of the Self.”
Thinking
Why you should laugh at yourself, according to Seneca and Nietzsche
“It is more human to laugh at life than to lament it.”
13.8
Why the origin of life and the Universe itself might be forever unknowable
There might be a hard limit to our knowledge of the Universe.
Up Next
Starts With A Bang
LIGO’s Biggest Mass Merger Ever Foretells A Black Hole Revolution
When two black holes that shouldn’t exist are seen merging, physics has some explaining to do.After years of searching for gravitational waves, it finally happened: LIGO bagged the biggest one ever. […]