Pain is important. It informs us of problems that need attention. Our biological pain system can go awry: some people don’t feel any pain while others experience chronic pain with no evident cause. There’s mental pain, which from a physiological perspective is no different than physical pain, which is why aspirin is sometimes used to treat emotional duress.

Our relationship to pain seems to become more problematic as societies acclimate to higher levels of comfort. The habit of pill-popping to counter any negative biological reaction is so engrained that we rarely question their chemical composition or long-term consequences. The shift from aspirin for minor aches and pains to the surge in opioid consumption signals a culture unwilling to deal with even the slightest discomfort.

Of course, there are good reasons for some opioid usage, but the scourge of addiction has hit us hard. Families across the nation have lost loved ones. Indeed, over a two-decade period, more than 700,000 Americans died from drug overdoses — the bulk of them opioid-related.

As I’ve written about previously, over a one-year period I was given access to 120 Oxycodone tablets for surgeries due to cancer and a meniscus tear. Both times I took one and discarded the bottle. Instead, I turned to cannabis for pain management, which was not only more effective but also did not leave me susceptible to addiction.

Could Cannabis Be A Solution To The Opioid Crisis?

Could Cannabis Be A Solution To The Opioid Crisis?

I’m not alone. While there have been numerous reports about the benefits of cannabis for pain management instead of opioids, a new study, published on Dec. 14 in Journal of Health Economics, analyzed over 1.5 billion opioid prescriptions given between 2011 and 2018. The researchers confirmed the hype: states that legalize marijuana see sizable drops in opioid consumption.

Opioid prescriptions quadrupled between 2000–2015. As with the mental health industry and SSRIs scripts, pain management in recent years has relied on a money-making band-aid instead of actually treating the cause. It’s much easier to write a prescription and send the patient on their way than to root out a diagnosis and plot out an extensive plan to help them overcome it. This trend also revitalized heroin consumption, which became a cheaper solution when pill bottles could not be found.

Enter the burgeoning field of cannabis science. As the researchers write,

“One policy option that has the potential to reduce opioid prescriptions and opioid-related deaths is the passage of cannabis access laws. These state laws facilitate access to cannabis by removing state legal barriers — though possession of cannabis remains illegal under federal law.”

The researchers, from the University of Alabama School of Law and Vanderbilt University, list numerous studies confirming cannabis’s efficacy in pain management, again calling into question why it remains listed as a Schedule 1 substance. Regardless, society is moving quicker than legislation. People want to feel better, not become beholden to a drug whose efficacy is clinically worse than marijuana. 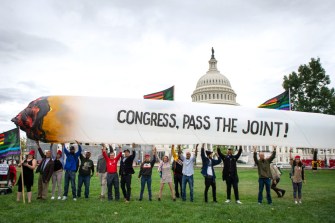 Marijuana activists hold up a 51-foot inflatable joint during a rally at the U.S. Capitol to call on Congress pass cannabis reform legislation on Tuesday, Oct. 8, 2019.

The team analyzed roughly 90 percent of all opioid scripts written over an eight-year period. They compare regional data with the passage of both Recreational Cannabis Laws (RCL) and Medical Cannabis Laws (MCL), discovering prescription reductions of 11.8 percent and 4.2 percent, respectively. When people are given the option, they are more likely to go with the proven track record of marijuana. The team concludes,

“The evidence reported here presents the most accurate picture of the effect of cannabis access laws on prescription opioid use to date and can therefore inform the ongoing state and national debates over the legality of cannabis as well as other policy options to combat the opioid epidemic.”

Pain affects aging populations more, and so the researchers looked into RCLs and MCLs affecting Medicare and Medicaid rates. If all states passed MCLs in 2014, Medicaid savings would have been over $1 billion. They also found, as has been widely reported, states that pass MCLs and RCLs experience lower mortality rates from opioid overdoses.

There is an ongoing debate about whether you can become addicted to cannabis or just dependent, yet one thing is clear: marijuana is not nearly as dangerous as opioids. Pain management is a discussion the medical industry needs to have with their patients. Avoiding pain at any cost is not worth it. For those suffering from pain, there is at least one viable solution. Our government needs to recognize this fact and change the scheduling, while doctors have to honor science instead of lobbying and marketing efforts by pharmaceutical companies.

Tags
health carehuman bodyillnessmarijuanapharmaceuticalssocial change
In this article
health carehuman bodyillnessmarijuanapharmaceuticalssocial change
Related
Health
New blood types are often discovered following medical disasters
New blood types are regularly discovered by an unusual absence or an unusual presence — both of which can result in tragedy.
Neuropsych
How you breathe affects your brain
Your breathing rhythm influences a wide range of behaviors, cognition, and emotion.
Health
COVID, RSV and the flu: A case of viral interference?
Viruses, it turns out, can block one another and take turns to dominate.
Neuropsych
Shopping with your nose: How body odors influence your buying behavior
Sniffing out a deal.
The Past
Ceramics, corn cobs, and other strange things we used before toilet paper
Some objects were softer than others.
Up Next
Life
Humans are exposed to 44 times as much BPA as previously assumed
A new method of measuring human exposure to the potentially toxic chemical calls into question regulatory policy.