What’s our lifespans to drop this time? According to Robert Redfield, the director of the Centers for Disease Control, opioid overdoses are to blame. 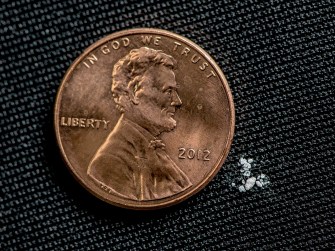 A lethal dose of fentanyl is presented next to a penny for scale.

The three waves of the opioid epidemic

The number of deaths due to drug overdoses have doubled in a decade, with 36,010 deaths in 2007 and 70,237 in 2017. To account for this sharp increase, we have to look back to the 1990s, when opioids first started being prescribed en masse. There are three reasons why opioids became so frequently prescribed during this time.

First, the US’s private health insurance system incentivizes the prescription of pills. Paying for pills is an attractive option for health insurance companies, as they’re often cheaper and faster acting than repeat treatments, like physical therapy — though often less effective in the long term.

Second, pharmaceutical companies spend a considerable amount of effort on making their products attractive to doctors and health insurance companies. They often buy dinners and host conferences in an effort to convince doctors to prescribe their medication more frequently. Research has shown that this tactic is effective; doctors who receive free lunches from pharmaceutical representatives are more likely to prescribe the related medication.

Third, as part of their effort to sell more of their product, pharmaceutical manufacturers exaggerated the benefits of opioids, minimized the downsides, and lobbied the government to loosen regulation. Combined, these three factors caused the 90s’ absurdly high levels of opioid prescription. But this was only the first wave of the opioid epidemic.

The second wave occurred around 2010, once we started to realize the considerable harm we were inflicting on ourselves by overprescribing opioids. We became stricter when it came to prescribing opioids, cutting off the supply for a number of addicted individuals. This restriction in access coupled with pharmaceutical pills’ comparatively higher price tag persuaded addicted people to use heroin instead. Between 2002 and 2013, heroin-related overdoses increased by 286%.

The third and current wave of the opioid epidemic began around 2013 when synthetic opioids began to hit the market. The most infamous of these is fentanyl. Two milligrams of fentanyl, an incredibly small amount, can be a fatal dose for most people. It is also significantly cheaper to manufacture than heroin, and heroin is often laced with fentanyl as a result.

Though the opioid epidemic may have grown into a beast large enough to reduce overall life expectancy, this doesn’t mean it can’t be stopped. Experts believe there are some sound strategies to ending the opioid epidemic once and for all, such as by rethinking opioid prescription practices and regulation. The current opioid epidemic began because of the over-prescription of pain relievers — these drugs are medically necessary, but only for a limited number of conditions. Regulation should be based on the medical evidence of prescription pills’ efficacy.

In addition to preventing addiction from happening in the first place, we can do more to help those already addicted to opioids. For instance, we can increase funding for and the availability of naloxone, a drug that’s remarkably efficacious at reversing opioid overdoses, and by implementing needle exchange programs.

When treating addiction, we also need to acknowledge that it’s a condition that doesn’t end once an individual is “clean.” Addiction is a chronic condition, one that often lasts for a lifetime. This understanding needs to be reflected both within the medical community and health insurance companies. Medication-assisted treatment, or MAT, combines behavioral therapy with medication like methadone, buprenorphine, and naltrexone, and its been shown to be remarkably effective at treating opioid addiction. However, not all insurance plans support treatments like MAT. At the very least, it should be covered under state Medicaid programs. Some Medicaid programs do cover the medications needed for MAT, though the implementation leaves much to be desired.

There are numerous additional ways that we can combat the addiction epidemic, like criminal justice reform or health care reform, but none of these changes will occur overnight, and certainly none will occur without sufficient political will. The question is, are our shrinking lifespans motivation enough?

Tags
healthhealth carenarcoticspharmaceuticalspublic healthunited states
In this article
healthhealth carenarcoticspharmaceuticalspublic healthunited states
Related
The bizarre history of exercise explained in 8 minutes
Harvard professor Daniel Lieberman debunks the ‘10,000 steps per day’ myth.
▸
8 min
—
with
Daniel Lieberman
Health
America’s maternal death rate: “This is a national crisis”
Black women are 3x more likely to die giving birth. Here’s one plan to fix that.
▸
7 min
—
with
Michael Dowling
Harvard professor debunks the biggest exercise myths
Exercise culture is crazy. But what you need to do is exceedingly simple.
▸
with
Daniel Lieberman
Health
Food expiration dates don’t have much science behind them
A food safety researcher explains another way to know what’s too old to eat.
The Present
Five key findings from the 2022 UN Population Prospects
Explore the key highlights from the UN’s latest release of its world population estimates.
Up Next
The Present
A.I. can now create fake videos of people from a single picture
Researchers advance machine learning to create videos of people from single stills and paintings.