It might seem appealing to certain college students, but this rare condition would probably make life extremely difficult: auto-brewery syndrome. When enough yeast becomes trapped in your gut, it can turn your body into a mobile fermentation vat — eat the wrong foods, and suddenly you’re as drunk as a lord. 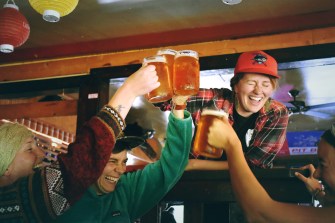 Everybody produces a little bit of alcohol in their gut from the fermentation of partially digested food. This is easily metabolized such that you don’t notice any ill effects, but for individuals with auto-brewery syndrome, the amount of alcohol that their gut produces overwhelms the body. The condition doesn’t typically make you extra confident and friendly, either. Instead, it results in painful headaches, little energy, and extreme intoxication during inconvenient times.

For instance, one 35-yeard-old schoolteacher was pulled over for drunk driving in New York State. When police administered a breathalyzer, they found that her blood-alcohol content was four times the legal limit. However, she was able to evade drunk-driving charges after doctors tested her gut and found that her intestines were fermenting high-carbohydrate foods.

The earliest cases of the condition were reported in Japan, which makes sense for both cultural and genetic reasons. First, yeast convert carbohydrates and sugars into alcohol, and the Japanese have a famously high-carb diet, making them more likely to experience the condition’s symptoms. Second, about 50 percent of East Asians possess a genetic mutation that interrupts the body’s alcohol metabolism.

Normally, alcohol is converted into toxic acetaldehyde, which is converted into acetate, which is converted into water and carbon dioxide. But many East Asians possess genetic mutations that increases alcohol’s conversion to acetaldehyde and decreases its acetaldehyde’s conversion to acetate — the result is commonly known as “Asian flush reaction,” where the build up of acetaldehyde causes an irritating red flush, nausea, headaches, and other unpleasant side effects. It’s likely that auto-brewery syndrome was first discovered in Japan because of how much more noticeable it would be and how much more obviously unpleasant the condition would be to those who suffered from it.

“Up until the age of 16, I was a straight-A student and found academic work enjoyable and rewarding. I was also a keen athlete and sportsman, and had a great social life. As the auto-brewery syndrome began to assert itself, all of this changed. I found myself struggling badly at school when, in my mind, I knew I shouldn’t be having any problem. […] I looked at equations in my favorite science classes and knew I should have no problem understanding and solving them, but they now looked like gibberish.”

Auto-brewery syndrome isn’t common enough to be recognized as a disability, but as a side effect of his constant exposure to alcohol, Hogg was diagnosed with IBS, chronic fatigue syndrome, depression, and anxiety — enabling him to get treatment. To manage his auto-brewery syndrome, Hogg also sticks to a paleo diet, eating only meat, vegetables, nuts, and seeds.

How do you get auto-brewery syndrome, and can it be treated?

The causes of auto-brewery syndrome aren’t extremely well known since it’s so rare, but it has been observed to occur in a few instances. When individuals with a diseased small intestine undergoes surgery to remove the diseased section, they can develop short bowel syndrome. This condition prevents patients from absorbing nutrients normally because they don’t have enough digestive tract to do so. In this case, carbohydrates passing through the digestive tract can start fermenting since they aren’t being fully absorbed by the body.

Making drastic changes to the gut’s microbiome can be a risk factor as well. Taking antibiotics, for instance, can upset the balance between the helpful and harmful bacteria in your gut, potentially providing yeast with the opportunity to gain a foothold. Overindulging in sugary or carb-laden food can have a similar effect.

If you were to become one of the unlucky few to acquire auto-brewery syndrome, treatment mainly consists of changing your diet to avoid carbs and sugars and to eat more protein. There’s also been some successful reports of anti-fungal therapy and antibiotics as well as supplementing with probiotics to help rebalance the gut. While auto-brewery syndrome might sound like a medical superpower (Brew your own beer in your gut!), most are better off when their beer and wine are brewed by professionals.

Tags
biologydiseasehealthhuman bodyillness
In this article
biologydiseasehealthhuman bodyillness
Related
Health
The scientific highs and lows of cannibinoids
Hundreds of these cannabis-related chemicals now exist, both natural and synthetic, inspiring researchers in search of medical breakthroughs.
Health
How saliva changes the flavor of food
“It’s a liquid, but it’s not just a liquid.”
Health
New blood types are often discovered following medical disasters
New blood types are regularly discovered by an unusual absence or an unusual presence — both of which can result in tragedy.
Neuropsych
How you breathe affects your brain
Your breathing rhythm influences a wide range of behaviors, cognition, and emotion.
Health
COVID, RSV and the flu: A case of viral interference?
Viruses, it turns out, can block one another and take turns to dominate.
Up Next
The Present
In this remote Indian village, every person’s name is a song
In the village of Kongthong, villagers don’t call each other by their name; instead, they call out using unique, bespoke tunes that resemble birdsong.