Alcohol has enjoyed a near universal presence across human societies. Our ancestors began experimenting with alcohol fermentation at least 9,000 years ago and incorporated such heady drinks into their ceremonies, celebrations, social gatherings, and even medical practices. Today, alcohol is the most popular drug in the world. We use it to destress, to cheer us up, and to lubricate social interactions.

But why have people across cultures and through the ages enjoyed alcohol so much? It’s all in how alcohol interacts with the human brain.

To see how alcohol affects the brain, let’s perform a little thought experiment. Imagine you’re at your favorite haunt, and you order a drink. It doesn’t matter if it is wine, beer, or a cocktail. As far as our brains are concerned, alcohol is alcohol is alcohol. (Our waistlines, however, have another opinion on the matter.)

You ease into the booth, have a few sips, and enjoy some chitchat. You polish off your drink as a sense of relaxation disperses across your consciousness. Here’s what’s going on inside that head of yours.

To get to the brain, alcohol must first be absorbed into your body through the GI tract. Most of the booze will be sopped up by your small intestines, where epithelial cells send it into the bloodstream. If you are drinking on an empty stomach, the alcohol beelines to the small intestine, and you’ll feel its effects wash over you quite suddenly.

But if you enjoyed some pub grub with your drink, you’ll notice the effects take longer to hit you. That’s because your pyloric sphincter is closed to allow the stomach to digest the food. While your stomach absorbs some of the alcohol, it can’t manage the job as effectively as your intestines.

Once in the bloodstream, the alcohol moves throughout your body. Your liver begins metabolizing what alcohol it can, but it can only manage so much at a time. On average it can handle one standard drink per hour, but this rate is highly dependent on you as an individual. Some people process their alcohol faster, others slower.

Since you are drinking out, you’ll need to pay attention to how much you’ve consumed in standard measurements. If you ordered a pint of your favorite IPA, for example, you probably consumed 16 ounces of beer at 7.5 percent ABV. You ordered one drink, but your liver is handling closer to two standard drinks.

But hey, it’s the weekend, and you decide to belly up to the bar and order another round.

At this point, you’re consuming alcohol faster than your liver can metabolize it, and the excess is accumulating in your bloodstream, increasing your blood alcohol concentration (or BAC). As the alcohol rides your bloodstream, it eventually makes its way to your brain, where it passes the blood-brain barrier and begins interacting with your neurons. 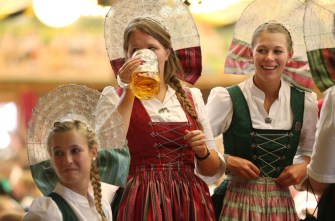 How alcohol affects your brain

Alcohol inhibits activities in the brain. This is why it is known as a “depressant” — not because it makes you feel dispirited but because it reduces, or depresses, mental processes (compared to stimulants like caffeine that increase them). It manages this feat by tweaking with your brain signals.

Put simply, your nervous system relies on two types of signals: excitation and inhibition. Think of them as your personal binary code. An excitatory signal tells a neuron to fire up; an inhibitory signal tells a neuron to stay sedate. Chemical messengers called neurotransmitters are responsible for these signals. Glutamate and GABA are the primary neurotransmitters for excitatory and inhibitory signals, respectively.

As you’re enjoying your second drink, the alcohol is hindering your glutamate neurotransmitters while pumping up the GABA. Basically, it’s telling your brain to chill out, and you perceive this mental inactivity as a drowsy, easygoing relaxation.

The alcohol is also increasing your brain’s output of dopamine, another neurotransmitter that serves many functions, one of which is to control your brain’s reward center. A sensation or experience that releases dopamine tells your brain, “Hey, this is going to feel good. Remember this experience because we’ll want do this again sometime.”

Dopamine is why we experience drinking as fulfilling and also why it can prove habit forming. One study showed that people with a family history of alcohol abuse release more dopamine than nondrinkers simply in expectation of a quaff.

At this point the chemical pickling process has intensified, and your mental inactivity starts to affect the various structures of your brain. As these brain structures switch from active to less active, you feel a variety of different effects.

Your prefrontal cortex, for example, is your mind’s executive and plays key roles in decision-making, self-management, and social behavior. As this region’s activities slow down, you’ll find you are more socially adventurous but also less cautious and prone to impulsive decisions.

Alcohol impairs your cerebellum, which regulates balance and motor functions. The more you drink the more you must concentrate to perform motor functions as basic as walking. A cock-eyed cerebellum also stifles your reaction time and is the reason why drinking and driving is so dangerous.

Then there’s the hippocampus, the brain’s hard drive. Even small amounts of alcohol can make memories slippery to hold on to. Drink enough and you’ll find large portions of the evening’s events completely wiped.

Two (or more) drinks over the line

Depending on how much you drink, you can end up anywhere from squiffy to chemically inconvenienced to full-on drunk. But these are only the short-term effects. Alcohol can continue to alter your mind well beyond your morning hangover.

The brain is an incredibly adaptive organ, so the more often you drink the better it learns to compensate for alcohol’s effects. This is why long-time drinkers have to drink more to maintain the same buzz. Drink heavily enough for long enough, and your brain’s compensation will shift into normalcy, resulting in alcohol dependence. So, the more often you drink the more severely alcohol changes your brain.

Light drinking can be part of a healthy lifestyle and may even confer some health benefits. One study found that light drinkers — those who consume less than three drinks per week — have a lower risk of cancer than moderate to heavy drinkers and even nondrinkers. Of course, the researchers warn that the “evidence should not be taken to support a protective effect of light drinking,” so teetotalers needn’t get their drink on just to mitigate their risk of cancer.

Moderate drinking — one drink a day for women, two for men — can also be part of a healthy lifestyle, but some research has suggested that even this rate of consumption can have ill health effects. One study found that moderate drinkers were more likely to develop hippocampal atrophy.

Heavy drinking, on the other hand, is undeniably harmful to your body and brain. Such levels of consumption can impact your cognitive abilities and lead to diminished gray matter, memory loss, loss of visuospatial abilities, and Wernicke-Korsakoff syndrome. Heavy drinking quite literally shrinks your brain.

Talk with your doctor

It’s worth pointing out that our little thought experiment provides a general overview of how alcohol affects the brain. As with any drug, many factors influence how things shake out, such as a person’s age, gender, genetic background, drinking history, and even level of education. Lifestyle choices such as whether you smoke or get enough exercise will also play in.f

Studies have suggested, for example, that women who are heavy drinkers are more vulnerable than men at developing cirrhosis, nerve damage, and brain damage — even if they engage in such levels of consumption for fewer years.

If you choose to drink, the best way to determine what habits are best for you is to speak openly and honestly with your physician.

The development of the revolutionary gene-engineering tool CRISPR is a tale fit for the big screen.
Up Next
Life

Scientists sequence the genome of this threatened species