Sequencing the genome of a particular species of an animal is important in terms of preserving genetic diversity. Future generations don’t necessarily have to worry about our memory of the Canadian Lynx warping the way hearsay warped perception a long time ago. 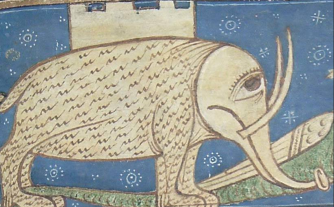 13th-century fantastical depiction of an elephant.

It is easy to see how one can look at 66,000 genomic sequences stored away as being the analogous equivalent of the Svalbard Global Seed Vault. It is a potential tool for future conservationists.

But what are the practicalities of sequencing the genome of a lynx beyond engaging with broad bioethical questions? As the animal’s habitat shrinks and Earth warms, the Canadian lynx is demonstrating less genetic diversity. Cross-breeding with bobcats in some portions of the lynx’s habitat also represents a challenge to the lynx’s genetic makeup. The two themselves are also linked: warming climates could drive Canadian lynxes to cross-breed with bobcats.

John Organ, chief of the U.S. Geological Survey’s Cooperative Fish and Wildlife units, said to MassLive that the results of the sequencing “can help us look at land conservation strategies to help maintain lynx on the landscape.”

What does DNA have to do with land conservation strategies? Consider the fact that the food found in a landscape, the toxins found in a landscape, or the exposure to drugs can have an impact on genetic activity. That potential change can be transmitted down the generative line. If you know exactly how a lynx’s DNA is impacted by something, then the environment they occupy can be fine-tuned to meet the needs of the lynx and any other creature that happens to inhabit that particular portion of the earth.

Given that the Trump administration is considering withdrawing protection for the Canadian lynx, a move that caught scientists by surprise, it is worth having as much information on hand as possible for those who have an interest in preserving the health of this creature—all the way down to the building blocks of a lynx’s life.

Tags
animalsbiologycanadacatsconservationdnaenvironmentgenomelynx
In this article
animalsbiologycanadacatsconservationdnaenvironmentgenomelynx
Related
The Present
The “maritime Indiana Jones” who salvages shipwrecks now wants to tow icebergs
Simple physics makes hauling vast ice chunks thousands of miles fiendishly difficult — but not impossible.
Neuropsych
Inside the brains of aging dogs
In a citizen science project, thousands of pet dogs are helping scientists to understand what happens to memory and cognition in old age.
Life
Strange life forms create an “alien” ecosystem in an abandoned uranium mine
Slimy biofilms made up of bacterial and eukaryotic life forms have taken over an abandoned, flooded uranium mine in Germany.
The Present
Climate change is altering the chemistry of wine
Smoke taint from wildfires is gross, even to wine amateurs.
Life
Our antidepressant drugs are affecting animals and ecosystems
A toxicologist explains the impacts of antidepressants on fish — and no, they’re not getting any happier.
Up Next
Health
Why cauliflower is perfect for the keto diet
The exploding popularity of the keto diet puts a less used veggie into the spotlight.