If you were to approach the mountain village of Kongthong in India, you might notice the cacophony of peculiar bird calls echoing through the jungle. They wouldn’t sound like any birds that you had heard before, though — these songs come from the villagers themselves.

They call to their neighbors in song. They sing to their children in to eat. They rhapsodize to find each other in the jungle.

Each song is unique, and each one refers to a specific individual. The practice, known as jingrwai lawbei, means each villager is given a musical name alongside their more traditional one.

Kongthong is an isolated, ancient village that’s been in the mountains of the Indian state Meghalaya for five centuries. It only become electrified in 2000, and until 2013 when a dirt road was constructed, it was a several-hour hike from the nearest town.

Villagers say that jingrwai lawbei is an expression of maternal love — the term itself translates to “song of the clan’s first woman,” and so the practice is in honor of the mythical woman who first established the community.

Kongthong is a matrilineal village, unlike most other Indian villages. Husbands take their wives’ names, and property is passed down from mother to daughter, but it’s not entirely as idyllic as it sounds. Women don’t have much decision-making power, and male and female roles are clearly defined. Raising children is distinctly a female job, while males make most of the major decisions in the village.

When a child is born in Kongthong, their mother gives them song. Often, the father composes a song as well, until eventually, the best tune is selected. They come in two versions: a short version and a longer one, which lasts about 30 seconds or so. In the house, the shorter tune is used, but in the forest, the longer one is used. This practice partly began from the superstition that if a ghost in the jungle learns your name, then they can take it, making you sick and causing your subsequent death.

Assignment Asia: The Indian Village Where Everyone’s Name is a Song

What is the difference between jingrwai iawbei and a regular name? “Calling out by jingrwai Iawbei is calling with love and respect,” the villagers say. “Jingrwai Iawbei is unique for it lives as long as the person lives.”

“It expresses my joy and love for my baby,” said 31-year-old mother Pyndaplin Shabong to the AFP.

They’re not used all the time, either. Rothell Khongsit, a community leader, explained that “if my son has done something wrong, if I’m angry with him, he broke my heart, at that moment I will call him by his actual name.”

The songs have no specific meaning, and no words are involved — instead, they resemble bird song. “We are living in far-flung villages, we are surrounded by the dense forest, by the hills,” said Khongsit. “So we are in touch with nature, we are in touch with all the gracious living things that God has created. Creatures have their own identity. The birds, so many animals, they have ways of calling each other.” 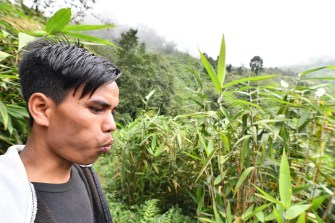 An Indian villager whistles as he calls to a friend in a field in Kongthong village. Photo credit: Biju BORO / AFP

Unfortunately, modernity threatens to undermine the tradition. Music from the outside world has influenced the practice, with one woman naming her child after the tune from the Bollywood song “Kaho Na Pyar Hai.” As mobile phones become more common in the village, it’s become easier to call one’s peers rather than to sing out their name.

In order to preserve this practice, Khongsit and other village leaders believe that they need to open the village up to the world. They’ve constructed cottages for tourists, who are drawn both by the unique singing tradition there and the many living root bridges that are throughout Meghalaya.

He lived with a tribe of hunter-gatherers to witness how an ancient culture survives one of the most brutal climates on Earth. His learnings may surprise you.
▸
8 min
—
with
James Suzman
Neuropsych

When your passion becomes your day job, sometimes the day job becomes a chore.
High Culture

Because Dylan “samples and digests” songs from the past, he has been accused of plagiarism. But imitatio isn’t the same.
High Culture

The birth of pop: How catchy, disposable songs came to dominate the music industry

The Industrial Revolution changed music forever, thanks to a combination of technological advances and clever entrepreneurs.
Health

Music and sounds only seem to reduce pain in mice when played at a specific volume.
Up Next
Starts With A Bang

Everyone Missed An Apollo 11 Mistake, And It Almost Killed The Astronauts Returning To Earth

Even with the best preparation imaginable, sometimes you have to get lucky, too.Even from our perspective in 2019, 50 years later, humanity’s achievements from July, 1969, still mark the pinnacle of […]