Autism has captured headlines, and therefore an undue amount of cultural panic, for many years. Yet, many people remain befuddled regarding basic information of this developmental disorder.

They don’t believe people with autism experience emotions. (They do.) They fear that their child may catch autism from a classmate. (No, it’s not contagious.) They wonder if the parents are to blame. (They aren’t.) And they always want to know what an autistic person’s savant talent is. (Autistic people certainly have talents, but movies have left us with the false assumption that autism equals Rain Man.)

To help spread awareness — and cut through the falsehoods, half-truths, and misinformation — here are seven things everyone should know about autism.

Autism is a neurodevelopment disability. People with autism have difficulty communicating or interacting socially and may engage in repetitive behaviors. They interact, behave, and learn in unique ways. Their behaviors may include avoiding eye contact, having trouble processing everyday sensory intake, showing no interest in make-believe games, and not enjoying physical contact such as hugging.

It’s considered a spectrum condition because it affects people differently (hence the phrase “on the spectrum”). No two people will display identical conditions nor require the same support. Some autistic people can live healthy, independent lives, while others require more extensive care and support.

Originally, the Diagnostic and Statistical Manual of Mental Disorders categorized autism under the umbrella term “pervasive developmental disorder.” But when the manual was updated to its fifth edition in 2013, it revised its criteria for autism. The category is now “autism-spectrum disorder,” and it combines conditions that used to be diagnosed separately. These include autistic disorder, Asperger syndrome, and pervasive development disorders not otherwise specified (or PDD-NOS).

There is no lab test, like a blood test or genetic screening, available to determine if someone has an autistic-spectrum disorder. Medical professionals must make the determination based on behavior and development observations.

Autism Is a Term for Behavior, Not Diseasewww.youtube.com

Scientists don’t know what exactly causes autism. Current investigations suggest a genetic origin, though environmental factors have not been ruled out entirely.

While it’s difficult to untangle the interplay between genes and the environment, a longitudinal cohort study published in JAMA Psychiatry has provided the largest attempt so far. Researchers examined health data of more than 22,000 children diagnosed with autism spectrum disorder (ASD) from five countries. They estimated the heritability of ASD to be approximately 80 percent. They also found maternal effects — that is, the idea that the condition of the mother’s body makes a child more likely to develop autism — to be insignificant.

“Although families are often most concerned about environmental risk factors for autism, the reality is that genetic factors play a much larger role overall,” Andrew Adesman, director of developmental and behavioral pediatrics at Cohen Children’s Medical Center in New Hyde Park, told HealthDay News. (Dr. Adesman was not involved in the study.)

It remains unclear how genes linked to autism are being activated, and researchers are quick to note that we can’t altogether ignore potential environmental factors. After all, they are the ones we can potentially adjust or learn to avoid, and even if genes play the dominant role, the environment could still activate them.

The National Institute of Environmental Health Sciences lists the following as associated with autism:

Other studies have found connections between autism and high levels of processed foods in maternal diets, as well as an absence of certain gut bacteria.

Please note: No one claims these environmental factors cause autism, but they do appear to increase a child’s risk of developing it when combined with unfavorable genetic factors. 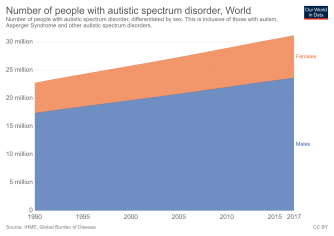 A graph showing the number of people with autistic-spectrum disorder in the world. (Source: IHME/Our World in Data)

The CDC’s Autism and Developmental Disabilities Monitoring Network estimates the prevalence of autism among 8-year-old children in the U.S. Its estimates are based on more than 300,000 children across the U.S., with updates released every two years.

Worldwide, the trend is similar. According to the Institute for Health Metrics and Evaluation, in 2014 17.92 million people were estimated to have autism. By 2016, the number had grown to 18.30. As in the United States, boys are four times more likely than girls to be diagnosed as autistic.

Scientists aren’t sure why the numbers keep climbing, but they know it’s not something we added to the water. The likely answer is increased awareness and improved diagnosis.

For example, white children are identified as autistic more often than black or Hispanic children, but the reason for this is not genetic. Rather, income, a lack of healthcare access, and non-English primary language are all cited reasons for the discrepancy. As these barriers are reduced, the gap has shrunk.

“Autism prevalence among black and Hispanic children is approaching that of white children,” Stuart Shapira, associate director for science at CDC’s National Center on Birth Defects and Development Disabilities, said in a release. “The higher number of black and Hispanic children now being identified with autism could be due to more effective outreach in minority communities and increased efforts to have all children screened for autism so they can get the services they need.”

States with more extensive outreach services report higher a prevalence of autism among children, too. New Jersey has the highest reported prevalence, but it furnishes extensive resources for professionals and support services. Conversely, the rural state of Alabama reports the lowest prevalence in the nation.

And let’s remember that Asperger’s syndrome and other disorders on the spectrum have been folded into a single diagnosis. As such, the number of children being diagnosed under a more cohesive criteria may bolster numbers previously spread out over distinct conditions.

Healthy young child goes to doctor, gets pumped with massive shot of many vaccines, doesn't feel good and changes - AUTISM. Many such cases!

Healthy young child goes to doctor, gets pumped with massive shot of many vaccines, doesn’t feel good and changes – AUTISM. Many such cases!twitter.com

This isn’t news, but there remains a lot of doubt and confusion. To pick one notable anti-vaxxer, President Donald Trump recently walked back this 2014 tweet linking autism to vaccines but still claims that too many vaccines in too short a time frame could have caused the rise in autism rates. He has also considered establishing a special autism commission to investigate this thoroughly-vetted practice.

A 2019 Danish cohort study look at the medical histories of more than half a million children born between 1999 and 2010. The researchers found no link between autism and the MMR vaccine (a vaccine for measles, mumps, and rubella). They also found no increased risk of the vaccine triggering autism in susceptible subgroups.

This is just one of many such studies that have failed to link the two. So again: Vaccines do not cause autism.

No, there is no cure for autism, but the question — often phrased in this manner — is misleading. Autism is a neurodevelopmental disorder, not a disease. People with autism won’t be cured with a pill because they aren’t sick. They think and see the world in unique ways. However, therapies and interventions have been designed to help individuals and families address the challenges of living with autism.

“Intervention can help to lessen disruptive behaviors, and education can teach self-help skills for greater independence,” writes the Autism Society. “But just as there is no one symptom or behavior that identifies people with autism, there is no single treatment that will be effective for everyone on the spectrum.” [Emphasis original.]

Strategies include social skills training, speech therapy, cognitive behavioral therapies, occupational therapy, family service plans, and individualized education plans. Which psychosocial interventions are selected will depend on the individual’s strengths and weaknesses. Biomedical interventions have been proposed and used, but the National Institute for Health and Clinical Excellence has ruled out many of them. In children, for example, they recommend never using chelation, secretin, or hyperbaric-oxygen therapies.

While therapy strategies will vary based on the individual’s needs, they are all most effective if they are accessed as soon as possible.

“The earlier a child with autism is diagnosed and connected to services, the better,” Coleen Boyle, director of the CDC’s National Center on Birth Defects and Developmental Disabilities, told Scientific American. “Our message to parents is, if you have a concern about how your child learns, plays, speaks, acts or moves, take action. Don’t wait.”

Understanding the Genome and the Future of Autism Therapies with Jonathan Sebat – On Our Mindwww.youtube.com

The future looks bright. A drive toward autism awareness means more children are more likely to be diagnosed younger so they can begin therapies sooner. More communities are developing the resources necessary to support individuals and families living with autism. And a cultural shift toward neurodiversity has begun to lessen the stigma surrounding autism-spectrum disorders and other mental health conditions.

Even the increased prevalence of autism, which seems scary as a raw number, is ultimately a positive trend. The more young children diagnosed, the sooner their families can connect with the support and resources they need.

Researchers continue to look into the genetic causes of autism, too. They have begun to identify the genes linked to autism and to understand the relationship between autism, hereditable genes and de novo mutations. Revelations that may lead to new treatments and advancements in personalized medicine.

“In essence, that is personalized medicine, that is taking the genetic finding and determining what is the logical treatment and matching that patient up with an appropriate drug,” said Jonathan Sebat, chief of the Beyster Center for Molecular Genomics of Neuropsychiatric Diseases. “If we can find a few compounds that modulate neurodevelopment in the way that we want it to, and we can understand real disease mutations and how they respond to these drugs, then that’s the beginning of precision medicine.”

With improved awareness, dispelled half-truths, and scientists working toward new treatment options, the future may be very bright indeed.

Psychologists are finding that moral code violations can leave an enduring mark — and may require new types of therapy.
Strange Maps

A 19th-century surveying mistake kept lumberjacks away from what is now Minnesota’s largest patch of old-growth trees.
Neuropsych

An independent researcher looks into why there’s such strong opposition to her research.
Up Next
Neuropsych

Is mindfulness possible in a capitalist society?