The concept of time crystals comes from the realm of counterintuitive mind-melding physics ideas that may actually turn out to have real-world applications. Now comes news that a paper proposes merging time crystals with topological superconductors for applications in error-free quantum computing, extremely precise timekeeping and more.

Time crystals were first proposed as hypothetical structures by the Nobel-Prize winning theoretical physicist Frank Wilczek and MIT physicists in 2012. The remarkable feature of time crystals is that they would would move without using energy. As such they would appear to break the fundamental physics law of time-translation symmetry. They would move while staying in their ground states, when they are at their lowest energy, appearing to be in a kind of perpetual motion. Wilczek offered mathematical proof that showed how atoms of crystallizing matter could regularly form repeating lattices in time, while not consuming or producing any energy.

Time crystals have since been experimentally created in various labs.

Now researchers at the California Institute of Technology (Caltech) and the Weizmann Institute in Israel found that theoretically you can create a system that combines time crystals with so-called topological superconductors.

The field of topology looks at the properties of objects that are unchangeable (or “invariant’) despite deformations like stretching, twisting, or bending. In a topological insulator, the properties linked to the electron wave function would be considered topologically invariant.

As the scientists themselves explain, “Time crystals form when arbitrary physical states of a periodically driven system spontaneously break discrete time-translation symmetry.” What the researchers noticed is that when they introduced “one-dimensional time-crystalline topological superconductors” they found a fascinating interaction where “time-translation symmetry breaking and topological physics intertwine—yielding anomalous Floquet Majorana modes that are not possible in free-fermion systems.”

Majorana fermions are particles that have their own anti-particles.

How to tie a quantum knot

“Physicists Gil Refael and Jason Alicea explain the unique properties of electrons constrained to a 2 Dimensional world, and how they can be used to make noise-proof Quantum Computers.”

The research was led by Jason Aliceaand Aaron Chew from CalTech, as well as David Mross from the Weizmann Institute in Israel. 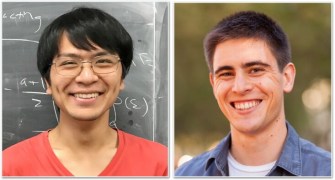 One way the phenomen noticed by the scientists could be potentially exploited is to create more stable qubits – the bit of quantum information in quantum computing. The race to create qubits is at the threshold of bringing on a true quantum technology revolution, as writes Popular Mechanics.

“It’s tempting to imagine generating some useful quantum operations by controlling the magnetic degrees of freedom that intertwine with the topological physics. Or perhaps certain noise channels can be suppressed by exploiting time crystals,” said Alicea.

Check out their new paper in Physical Review Letters.

Reality is more distorted than we think.
▸
with
Big Think
Hard Science

Microsoft Excel doesn’t have to be scary. This $29.99 training breaks it all down.

Get the absolute most out of what Excel can do with this incredible course and become a productivity master. Right now, it’s 90% off the regular price.