Having previously teased that he’d like to put one million people on Mars, tech billionaire and serial enterpreneur Elon Musk released the specifics of his plan to colonize space. His paper “Making Humans a Multi-Planetary Species” outlines what kind of technology humans will need to make that dream a reality, including how to build a city on Mars, as well as the timeline for this endeavor.

Musk proposes that it’s a necessity to make humans a space-faring civilization, citing the inevitable “doomsday event” that will befall us sooner or later. One big goal in making us a “multi-planetary species” would be to create a city on Mars that works not just an outpost but as a self-sustaining settlement that will drive the planet’s colonization.

The SpaceX, Neuralink, and Tesla Motors CEO sees Mars as the best destination for such a city because it has conditions better suited for a human colony than other planets – it has atmosphere, it’s rich in resources, its day is 24.5 hours, similar to Earth’s. In fact, the red planet is so similar to Earth that “if we could warm Mars up, we would once again have a thick atmosphere and liquid oceans,” writes Musk.

Here’s how Musk compared Earth and Mars head to head:

The big problem in getting people to Mars now? Exorbitant costs of about $10 billion per person, if we were to use traditional “Appolo-style” approaches. Musk wants that number to go down by 5 million percent. If the number is closer to $200,000 per person (a median house price in the U.S.), Mars colonization would become a reality. Musk sees this number dropping even lower eventually, to below $100,000 per person.

How would Musk bridge that gap? Most of the improvement would come from rocket reusability, while other cost savings would lie in figuring out how to refill in orbit and produce propellant on Mars. Choosing the right propellant is also important. Musk says methane would be easier and cheaper to harvest on Mars than, for example, hydrogen.

Getting people to Mars and other planets would be the job of the Interplanetary Transport System, which will feature a booster and a spaceship powered by the Raptor engine, currently in development by SpaceX. It will be 3 times more powerful than the engine currently powering the Falcon 9 rocket from SpaceX.

The booster, which Musk aims to make reusable up to a 1,000 times, would have 42 Raptor engines, making it the most powerful rocket in history. The booster would also be capable of launching 300 metric tons into low Earth orbit. Compare that to NASA’s Saturn V moon rocket which could lift 135 metric tons.

Here’s how the whole system that SpaceX is looking to implement would operate: 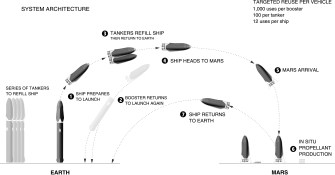 Musk also gives some details on how a trip to Mars aboard one of his ships would look like – a trip he estimates would take about 115 days. It’s important to make such a journey “fun and exciting,” with zero-gravity games, movies, lecture halls, cabins and a restaurant, Musk writes.

Once we figure out how to get humans to Mars in an efficient and consistent manner, Musk imagines that the colony there would need a million people for a self-sustaining city. To get them there would require 1,000 ships, each carrying 100 people. With travelling to the red planet possible every 26 months thanks to having to wait for favorable alignment with Earth, the whole process of colonizing Mars would take about 40-100 years after the first ship goes, which is currently planned for 2023.

Musk also considers going to other parts of the solar system by envisioning a system of planet or moon hopping. Besides creating and improving spacecraft, the key for further colonization of space would be to establish propellant depots in the asteroid belt or the moons of Jupiter or Saturn. That would enable flights to these and other planets.

How realistic are Musk’s plans? The prolific enterpreneur has a proven track record in methodically carrying out his visions. He also sees the colonization of space as such a personal priority that he says he’s making money primarily for that purpose:

“In my view, publishing this paper provides not only an opportunity for the spacefaring community to read the SpaceX vision in print with all the charts in context, but also serves as a valuable archival reference for future studies and planning. My goal is to make New Space the forum for publication of novel exploration concepts–particularly those that suggest an entrepreneurial path for humans traveling to deep space,” said Hubbard.

You can read Musk’s paper here.

Tags
colonizationdetailselon muskfuturefuturisminnovationmarsmoonnasapaperplansrocketsciencespacespacextechnology
In this article
colonizationdetailselon muskfuturefuturisminnovationmarsmoonnasapaperplansrocketsciencespacespacextechnology
Related
The Future
How a device transmits radio waves with almost no power
Apart from the energy needed to flip the switch, no other energy is needed to transmit the information.
The Present
How heat pumps of the 1800s are becoming the technology of the future
Innovative thinking has done away with problems that long dogged the electric devices — and both scientists and environmentalists are excited about the possibilities.
The Present
How California could save its rain instead of letting it drain into the ocean
Why can’t more rainwater be collected for the long, dry spring and summer when it’s needed?
Hard Science
Scientists use laser beam to divert lightning strikes
Laser-guided lightning systems could someday offer much greater protection than lightning rods.
The Future
Paper-thin solar cell can turn any surface into a power source
Some solar cells are so lightweight they can sit on a soap bubble.
Up Next
Starts With A Bang
The future of astronomy: thousands of radio telescopes that can see beyond the stars
Never heard of SKA, the square kilometer array? Once it starts taking data, you’ll never forget it.“Not all chemicals are bad. Without chemicals such as hydrogen and oxygen, for example, […]