Researchers found a 99-million-year-old chunk of amber containing the feathered tail of a dinosaur.

The remarkable discovery of the sample, which includes preserved bones, soft tissues and feathers, was made in 2015 at an amber market in Myanmar by the paleontologist Dr. Lida Xing from the China University of Geosciences at Beijing. After careful study of the sample by CT scanning and microscopic observation, an international scientific team now published their findings in Current Biology.

What’s remarkable about this? What isn’t?

It’s the first time skeletal material from a dinosaur was spotted in amber. The scientists can tell the flexible tail is from a dinosaur and not from a more contemporary bird-like creature due to the way the vertebrae in the sample are not fused together into a stiff rod.

The discovery sheds light on the evolution of feathers from dinosaurs to modern birds. The tail in the find likely belonged to a small “juvenile” dinosaur, probably no larger than a sparrow. It would be classified under the group of dinosaurs called Coelurosauria, a rather large group that fits animals from Tyrannosauruses to modern birds. 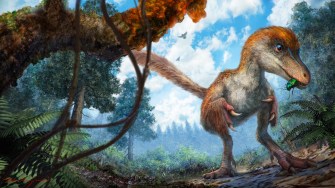 Here’s how Dr. Ryan McKellar, a paleontologist at the Royal Saskatchewan Museum in Canada and an author of the study, described the animal whose tail was found in an interview with ResearchGate:

The specimen in amber is so well-preserved that first looking at it really excited Dr. McKellar, an amber expert, who examined it after it was found by Dr. Xing.

“When it hit my desk, I was blown away,” said Dr. McKellar to the New York Times. “It’s one of those things where you’re like, ‘Wow!’ It’s the closest you’ll ever get to holding a fleshed-out dinosaur in your hands.” 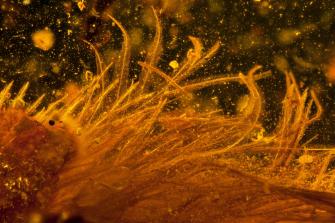 A micro-CT scan shows the feathers in the dinosaur tail. Credit: Lida Xing.

He was particularly fascinated by the feature structure, which did not have a central shaft called a “rachis,” something most birds of today have as they need it for flight. Its absence in the sample can be explained if other shafts and filaments in feathers called “barbs” and “barbules” developed before the rachis, with dinosaurs possibly using them for camouflage, visual signaling and to regulate temperature rather than to fly.

“It shapes our view of how feathers came to develop in modern birds, and it gives us a rare glimpse of what dinosaurs looked like and potentially what feathers were being used for in the mid-Cretaceous,” explained Dr. McKellar.

Humans won’t survive if we stay on Earth. Michio Kaku explains.
▸
7 min
—
with
Michio Kaku
Up Next
Technology & Innovation

5 badass moments in space history you should know about

In honor of John Glenn, here are some of the most badass things that happened in space that you might not know about — but totally should.