Fewer than 1 percent of all animals that ever lived have been fossilized. Yet fossils are essential for understanding the nature, notes Paige Williams in “The Dinosaur Artist.” They provide an evolutionary glimpse into an ancient world. As she writes,

“Without fossils, an understanding of the earth’s formation and history would not be possible… We would not know that the climate has warmed and cooled and is changing still… Without fossils, we would not know that birds evolved from dinosaurs; or that Earth was already billions of years old before flowering plants appeared; or that sea creatures transitioned to life on land and primates to creatures that crafted tools, grew crops, and started wars.”

Dinosaurs occupy a particularly special place in our collective imagination. Williams states that natural history museums would likely not exist without fossils as well. Now a new study, conducted by researchers at the Natural History Museum in London and published in the journal Proceedings of the Royal Society B, might have answered an age-old question: Why did dinosaurs feature such an elaborate diversity of ornamentation in their frills and crests?

The answer probably won’t surprise you, however: sex.

The New Face of Protoceratops?www.youtube.com

While there is no way to definitively answer an evolutionary question about Triassic reptiles, postdoctoral researcher Dr. Andrew Knapp has been closely analyzing Protoceratops frills. He was investigating if sexual selection played a role in this sheep-size Gobi Desert dweller.

“In many fossil animals, we have unusual structures and traits which aren’t really seen in living animals today. Protoceratops didn’t have any horns but they still had a huge frill.”

The researchers highlight the importance of “socio-sexual selection” throughout history: traits that serve a variety of purposes, including ornamentation and weaponry, as well as behaviors that helped to establish dominance hierarchies in societies. Humans are not the only species in which the loudest and/or flashiest alphas rise to the top; that information long predates our own genes.

Common examples of sexual selection include the famous tail feathers of peacocks or the elaborate mating rituals of bowerbirds. As Knapp says, however, such rituals are “quite often more complicated than just males being big and flashy and females being dull.” He continues,

“While there are quite a few examples in living animals where usually females select males based on the size of their tail feathers or calls, it is quite often overlooked that males do the same thing with females as well.” 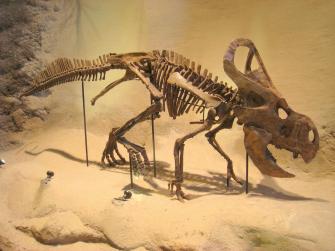 The case of Protoceratops frills is complex. Knapp and his team made four predictions about the shape of their skulls as possibly playing socio-sexual signaling roles at the outset of their study. Three were supported by the research:

The fourth prediction, sexual dimorphism (two different forms existing in the same population), is notoriously difficult to determine given that large sample sizes are needed to understand the impact of each form.

The group looked at 3D scans of 30 Protoceratops skulls and found positive allometry—distinct patterns of growth that could have been sexually selected. Yet without including other factors, such as selecting for coloration of these reptilian ornaments, the team couldn’t conclude with certainty that frills were due to mating alone.

Knapp concludes that it’s only sex that determined the impact of these frills—but it certainly seems to have played a role.

De-extinction, if it is ever possible, will not be simple.
The Future

Ancient humans may have evolved to slumber efficiently — and in a crowd.
Up Next
The Future