Some time in the early 1860s, at the Solnhofen Community Quarry located about halfway between Munich and Nuremburg in Germany, a fossilized feather was discovered in shale deposits. The first mention of it appeared in 1861, in letters from paleontologist Christian Erich Hermann von Meyer — who described its appearance on two facing slabs of stone — to the editor of the German journal “Jahrbuch für Mineralogie”. von Meyer proposed the feather be named Archaeopteryx lithographica. Six weeks later, von Meyer again wrote to announce a second discovery: A nearly complete skeleton of a feathered dinosaur found in the same deposits. The closeness of the timing and location caused the two finds to be linked together, with the feather considered the singular piece of evidence — the holotype — of a bird-like dinosaur to be called Archaeopteryx. Now, a new analysis of the fossil using Laser-Stimulated Fluorescence (LSF) has revealed, nearly 160 years later, that the two actually had nothing to do with each other other than proximity. Nature’s Scientific Reports published the surprising result. 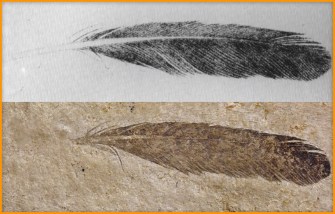 The case of the missing quill

One of the obstacles to a thorough understanding of the fossil has been that the feather it depicts has no quill, or calamus. Analysis of the calamus would have allowed scientists to ascertain the source of the feather on the animal from which it came. Was it a large primary wing feather, a secondary feather from the smaller secondary wing, or a tail feather called a primary covert?

When the discovery of the feather became public in 1862, the feather was described as having a calamus, and von Meyer drew it with one. However, there’s nothing there to the naked eye or when the fossil is viewed under x-ray fluorescence or with UV imaging.

A microscopic examination of the fossil revealed to the authors of the new paper, led by Thomas G. Kaye, that there had originally been a quill present, but that “past preparation had engraved around the outline of the feather and inadvertently prepared away the calamus at some unknown point in the past.”

The LSF uses a high-powered laser to expose geochemical differences between the fossil and the stone background. The chemicals fluoresce with different colors. In the end, LSF was able to recover the geochemical halo left behind by the missing materials. The halo perfectly matched von Meyer’s drawing, as well, providing even more confidence of its accuracy.

The feather is, in fact, a primary covert. But there’s something else.

In the years since the 1860s, other specimens of feathered dinosaurs have been found, including 11 or 12 specimens of Archaeopteryx, notably one residing in a Berlin museum. While the newly identified primary covert somewhat resembles the Berlin specimen’s secondary feathering — its closest match among all existing Archaeopteryx specimens — they’re clearly not the same.

So, whose feather is it?

While it could be that the fossil is of an Archaeopteryx feather not yet catalogued, the greater likelihood is that it belonged to some other, thus far undiscovered feathered dinosaur. The inevitable implication? There were more bird-like dinosaurs in the Jurassic than we realized.

How will Denver change if it decriminalizes magic mushrooms?

Psilocybin doesn’t just make you trip; it can have lasting effects on how you see the world.