Three previously unknown strains of bacteria were found growing in the International Space Station, according to a recent genetic analysis. The discovery could help scientists develop better ways to grow food on Mars.

The analysis, published in the journal Frontiers in Microbiology, describes how astronauts collected four strains of bacteria within the space station in 2011, 2015 and 2016. It was part of an ongoing surveillance program that tasks astronauts with monitoring eight sites of the space station for bacterial growth.

Astronauts have already sent hundreds of samples back to Earth for analysis, and thousands more are scheduled to be sent back on return missions.

The newly discovered strains belong to a family of bacteria called Methylobacteriaceae, which is commonly found in soil and freshwater. These bacteria help plants grow, fix nitrogen and stop pathogens. 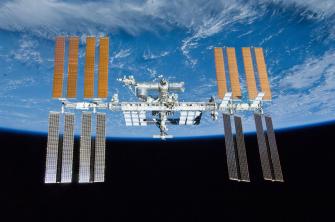 So, how did these novel microbes get in the space station? They likely came from the plant-growing experiments that astronauts have been conducting for years aboard the ISS, such as the Advanced Plant Habitat, an automated growth chamber that grows plants in space so scientists can study them back on Earth.

The new strains could be beneficial to space farming. After all, it’s already clear that the bacteria can survive the conditions of the space station, and the researchers wrote that the strains might possess “biotechnologically useful genetic determinants” that could help astronauts grow food on long-term missions, or on other planets.

“To grow plants in extreme places where resources are minimal, isolation of novel microbes that help to promote plant growth under stressful conditions is essential,” study authors Kasthuri Venkateswaran and Nitin K. Singh said in a press release.

“Needless to say, the ISS is a cleanly-maintained extreme environment. Crew safety is the number 1 priority and hence understanding human/plant pathogens are important, but beneficial microbes like this novel Methylobacterium ajmalii are also needed.”

To accelerate their understanding of how bacteria behaves in space, Singh and Venkateswaran proposed developing customized equipment that astronauts could use to analyze bacteria on the space station.

“Instead of bringing samples back to Earth for analyses, we need an integrated microbial monitoring system that collect, process, and analyze samples in space using molecular technologies,” they said. “This miniaturized ‘omics in space’ technology — a biosensor development — will help NASA and other space-faring nations achieve safe and sustainable space exploration for long periods of time.” 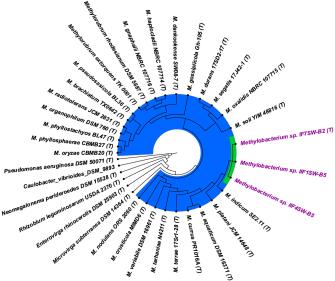 NASA is hoping to send humans to Mars by the 2030s, while private companies like SpaceX are aiming to reach the Red Planet this decade. For any Mars mission, developing sustainable ways to grow food is critical. That’s mainly because it’s impractical for astronauts to pack the food they’ll need for the journey, which will take 14 months roundtrip, not including time spent on the planet.

Astronauts also need to stay healthy. The main problem with prepackaged food, besides its weight, is that the nutrients break over time. That’s why NASA has been experimenting with growing various types of nutritious plants through projects like Veggie and the more recent Advanced Plant Habitat. These projects help scientists learn about the complexities of growing plants in microgravity, and how plants might grow on Mars. 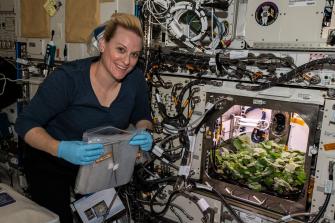 But growing plants in space isn’t all about nutrition. NASA notes that plants are psychologically beneficial to people, both on Earth and in space. These psychological benefits might become especially important to astronauts on long-term missions millions of miles away from Earth.

Here’s how astronaut Peggy Whitson, who worked aboard the International Space Station, described seeing plants in space for the first time:

“It was surprising to me how great 6 soybean plants looked,” she told Space Daily. “I guess seeing something green for the first time in a month and a half had a real effect. From a psychological perspective, I think it’s interesting that the reaction was as dramatic as it was. […] I guess if we go to Mars, we need a garden!”

Tags
bacteriafoodHumans of the FuturemarsnasaspaceSpace & AstrophysicsThe Future
In this article
bacteriafoodHumans of the FuturemarsnasaspaceSpace & AstrophysicsThe Future
Related
Starts With A Bang
Ask Ethan: What are white holes, and do they really exist?
In General Relativity, white holes are just as mathematically plausible as black holes. Black holes are real; what about white holes?
Hard Science
Earth has an eerie “sodium glow,” and astronomers use it to image stars
Air currents in our atmosphere limit the resolving power of giant telescopes, but computers and artificial stars can sharpen the blur.
The Future
Space travel will radically change human psychology and spirituality
We are traveling in a realm that once exclusively belonged to the gods. Space travel will force humanity to rethink everything.
Starts With A Bang
The good reasons scientists are so hostile to new ideas
Many people out there, including scientists, claim to have discovered a series of game-changing revolutions. Here’s why we don’t buy it.
Hard Science
3 new studies indicate a conflict at the heart of cosmology
The Universe isn’t as “clumpy” as we think it should be.
Up Next
The Future
Cornell creates the world’s tiniest self-folding origami bird
The bird demonstrates cutting-edge technology for devising self-folding nanoscale robots.