Cornell University has just announced what may be the smallest origami bird ever folded. While a typical origami animal is the product of an artist’s dexterous hands, the Cornell bird was folded by the strategic application of small electrical voltages. It had to be: The material of which the bird is comprised is just 30 atoms thick.

Creative expression isn’t the point of the university’s little avian — its construction previews principles and techniques that will lead to new generations of moving, nano-scaled robots that “can enable smart material design and interaction with the molecular biological world,” says Dean Culver of the U.S. Army Combat Capabilities Development Command’s Army Research Laboratory, which supported the research.

According to Cornell’s Paul McEuen, “We humans, our defining characteristic is we’ve learned how to build complex systems and machines at human scales, and at enormous scales as well. But what we haven’t learned how to do is build machines at tiny scales. And this is a step in that basic, fundamental evolution in what humans can do, of learning how to construct machines that are as small as cells.”

The lead author of the paper describing the tiny bird is postdoctoral researcher Qingkun Liu. The paper, “Micrometer-Sized Electrically Programmable Shape Memory Actuators for Low-Power Microrobotics,” is the cover story of the March 17 issue of the journal Science Robotics. 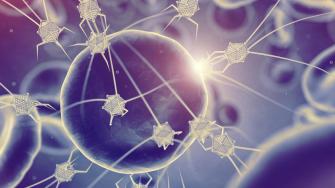 The project is the result of a collaboration between physical scientist McEeuen and physicist Itai Cohen, both of Cornell’s College of Arts and Sciences. It’s already resulted in a (very) small herd of nanoscale machines and devices.

Cohen explains, “We want to have robots that are microscopic but have brains on board. So that means you need to have appendages that are driven by complementary metal-oxide-semiconductor (CMOS) transistors, basically a computer chip on a robot that’s 100 microns on a side.”

The idea is that these minuscule workhorses—a metaphor, no nanoscale origami horses yet exist—are released from a wafer, fold themselves into the desired form factor, and then go on about their business. Additional folding would endow them with motion as they work, change shapes to move their limbs and manipulate microscopic objects. The researchers anticipate that these nanobots will eventually be able to achieve similar functionality to their larger brethren.

“The hard part,” says Cohen, “is making the materials that respond to the CMOS circuits. And this is what Qingkun and his colleagues have done with this shape memory actuator that you can drive with voltage and make it hold a bent shape.”

The bots are constructed from a nanometer-thick platinum layer that’s coated with a titanium oxide film. Rigid panels of silicon oxide glass are affixed to the platinum. A positive voltage creates oxidation, forcing oxygen atoms into the platinum seams between the glass panels, and forcing platinum atoms out. This causes the platinum to expand, which bends the entire glass-platinum structure to a desired angle.

Because the oxygen atoms collect to form a barrier, a bend is retained even after the charge is switched off. To undo a fold, a negative charge can be applied that removes the oxygen atoms from the seam, allowing it to relax and unbend.

This all happens very quickly — a machine can fold itself within just 100 milliseconds. The process is also repeatable. The team reports that a bot can flatten and refold itself thousands of times, and all it takes is a single volt of electricity.

None of this really removes what one might consider the artistry. Working out how and where to apply voltages to effect the desired shape is not a simple thing to do. McEuen says, “One thing that’s quite remarkable is that these little tiny layers are only about 30 atoms thick, compared to a sheet of paper, which might be 100,000 atoms thick. So it’s an enormous engineering challenge to figure out how to make something like that have the kind of functionalities we want.”

Still, the group is getting quite good at microscopic robotics, and has already been awarded the Guinness World Record for assembling the smallest-ever walking robot. The little 4-legged dude is 40 microns wide and between 40 and 70 microns long. They’re angling for a new record with their 60-micron-wide origami bird.

Says Cohen, “These are major advances over current state-of-the-art devices. We’re really in a class of our own.”

Tags
demoEmerging TechEngineeringmaterialsnanobotnanoscaleorigamiroboticsrobotsTech Trends
In this article
demoEmerging TechEngineeringmaterialsnanobotnanoscaleorigamiroboticsrobotsTech Trends
Related
The Present
Even in the age of AI, some problems are just too difficult for computers
Computers are growing more powerful and more capable, but everything has limits
The Future
How the metaverse will revolutionize K-12 and higher education
Imagine going on a tour through the human circulatory system as a tiny cell. That is just one example of education in the metaverse.
The Future
Startup’s bladeless flying car is designed to reach Mach 0.8
One of Jetoptera’s VTOLs is expected to reach speeds of around 614 mph, about as fast as a commercial jet airliner.
Strange Maps
Europe’s stunning digital divide, in one map
Some Europeans really don’t want to use the internet.
Hard Science
Scientists use laser beam to divert lightning strikes
Laser-guided lightning systems could someday offer much greater protection than lightning rods.
Up Next
Hard Science
Is the Earth’s “heartbeat” of 7.83 Hz influencing human behavior?
Some scientists believe the lightning-produced frequencies may be connected to our brain waves, meditation, and hypnosis.