For all the iPhones, virtual reality headsets, deep space rocket engines and self-driving cars that are a part of our modern world, many a crazy contraption was invented along the way. It’s entirely possible the ideas presented below are not the weirdest inventions ever simply because the truly weird ones probably never got close to the light of day or their creators were somehow destroyed in the process. Still, these are some of the strangest fruits of human ingenuity we know.

1. MOUSETRAP PISTOL – this 1882 invention by James A. Williams of Texas, takes a very serious approach to mice infestations. The product never took off as people were wary of keeping .50-caliber-loaded revolvers patrolling their kitchen floors.

2. TOMATAN – a wearable robot that feeds you tomatoes. Invented by the Japanese juice vendor Kagome, the robot that sits in a harness behind your head pulls out tomatoes and puts them directly in your mouth as you run. It even has a timer.

3. THE IMPULSORIA – the 1850 machine was invented in Italy by Clemente Masserano to utilize animal power on railways. 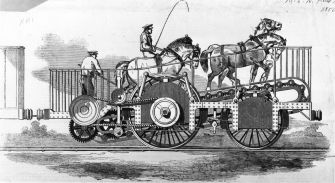 4. ANTI-PERVERT HAIRY LEG STOCKINGS – this Chinese invention is supposedly made to ward off would-be attackers from young girls.

5. GROUP SHAVING MACHINE – this 19th-century machine could shave a dozen men at once. One reason for its commercial failure was that it could not alter its movements according to face shape. 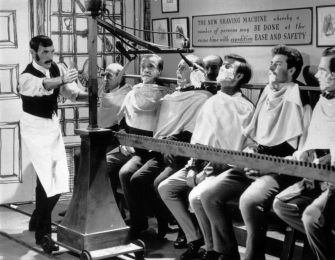 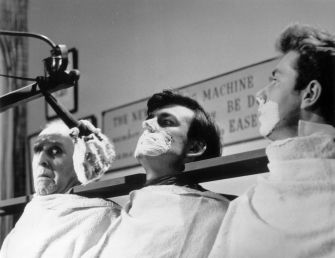 6. FLIZ – this foot-powered bicycle without pedals, saddle or any gears, was invented by German designers Tom Hambrock and Juri Spetter. The user hangs on a harness in between two wheels, propelling the bicycle by running, then resting feet on the back wheel.

7. MUSTACHE SHIELD – this 1876 mustache shield was patented by Virgil A Gates. The invention was designed to keep facial hair out of the way when eating and drinking. (Photo by M J Rivise Patent Collection/Getty Images) 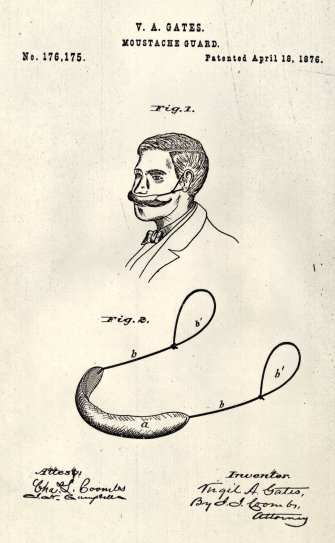 8. NOSE STYLUS – invented by Dominic Wilcox, this device allows you to keep a hand free for other tasks while you operate the phone with your nose stylus.

9. REVOLVER CAMERA– this Colt 38’s small camera automatically takes a picture when you pull the trigger. 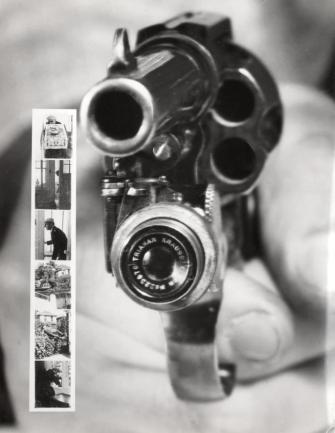 10. GRASS FLIP FLOPS – it gives you the sensation of walking on grass, only in your flip-flops.

11. DYNASPHERE – an electrically-driven wheel, capable of speeds of 30mph, invented by Mr J. A. Purves of Taunton and his son. 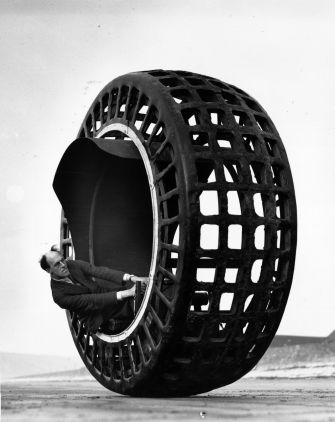 12. AN AUTOMATIC TIP REQUESTER – invented in 1955 by Russell E Oakes, this device saw hotel bellhops as its key market. It would say “No Sale” if the tip was too low. 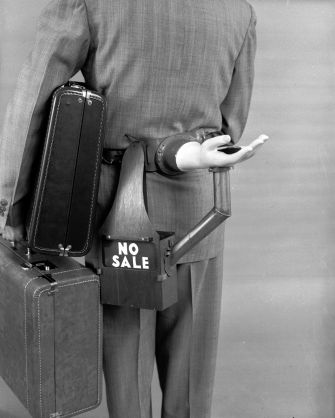 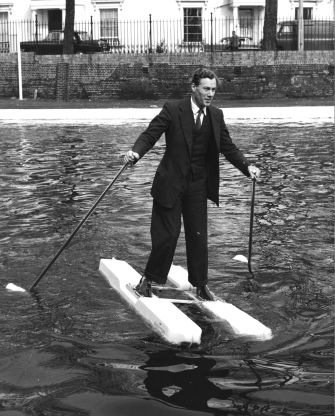 Here is the inventor, demonstrating the shoes on the Grand Union Canal. (Photo by Fox Photos/Getty Images)

14. ICE BABY-CARRYING DEVICE – invented in 1937 by the hockey player Jack Milford, this carrying device allowed him and his wife to carry their baby on ice. 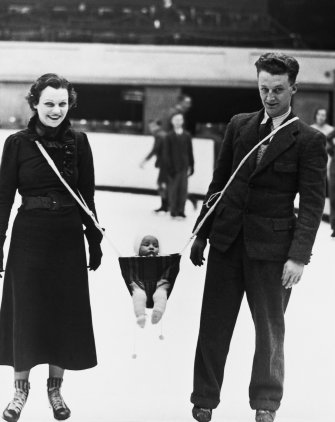 15. CHAIN-SMOKING DEVICE – for when smoking just one cigarette at a time is not enough. 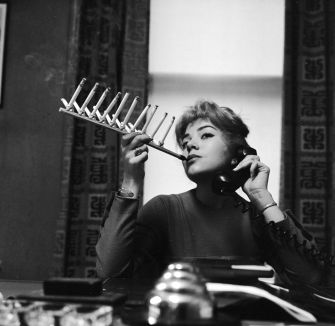 Model Frances Richards smokes a pack of cigarettes all on one cigarette holder. (Photo by Jacobsen/Getty Images)

16. CAT MEOW MACHINE – this 1963 mechanical cat meowing device from Japan can meow ten times a minute, with the eyes lighting up each time. The idea was to use the machine for scaring rats and mice. 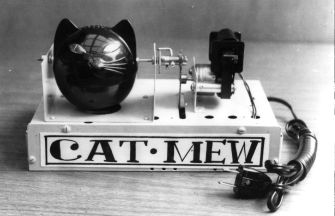 17. LE CELERIFERE – an early bicycle invented by le Comte de Sivrac, circa 1791. An alternative story is that the Comte was invented by the journalist Louis Baudry de Saunier in his ‘Histoire de la Velocipede’ from 1891. 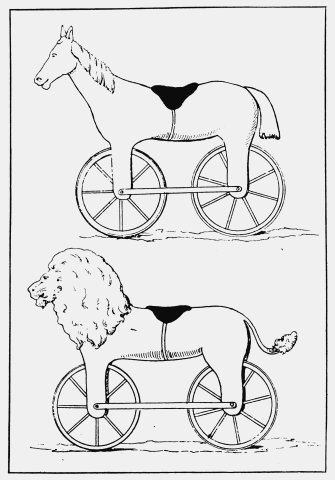 18. ALL-TERRAIN CAR – this 1936 wheel-laden monstrosity was an all-terrain car that could descend slopes up to 65 degrees in England. 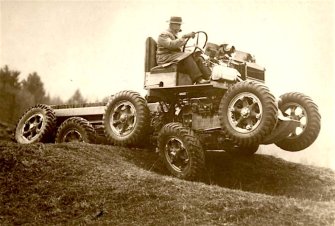 19. SNOW PROTECTORS – a Canadian invention from 1939, this plastic contraption offered protection for the face in snowstorms. 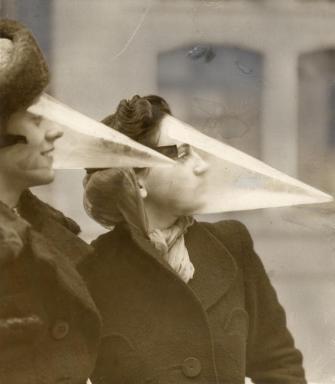 20. BEATING BREASTS– a 1963 pair of artificial breasts from Japan. The device had a built-in heartbeat and was meant to be a sleeping aid for very young children. 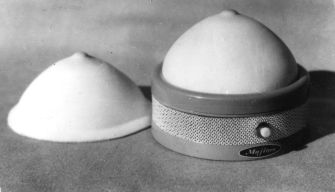 (BONUS) 21. RADIO STROLLER – this device from 1921 does what it says – it provides the baby with some much-needed radio transmissions. 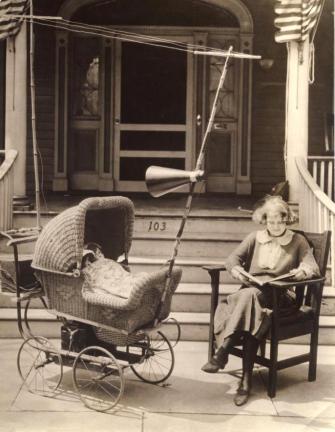 Scientists Try to Learn How to Cheer Up Pessimistic Pigs

Researchers find that pessimistic pigs’ behavior is strongly influenced by their mood.