The year is 2045, and an eccentric billionaire has revealed to the world an incredible new invention. It’s called the “experience machine,” and it’s an utterly immersive virtual reality device. It provides multi-sensory stimulation with such sophistication and depth that it’s effectively indistinguishable from real life. At a press of a button, the machine can give you constant pleasure of any kind. Mansions, fast cars, scoring a Super Bowl touchdown, winning the London marathon, ruling the Mughal Empire, never-ending orgasms — whatever you want.

The question is, if you had only two choices, would you live life in the experience machine or in the world as it is?

Who wants to ride the pleasure machine?

This is the thought experiment presented by philosopher Robert Nozick. It was designed to show the limitations of “hedonism,” that is, the idea that humans are solely, or primarily, motivated to seek pleasure above all else. Nozick’s own conclusion was that very few people would choose to live a life of constant pleasure so long as it was fake. No matter the perks of virtual reality, most of us would choose reality, warts and all. Hard truths over easy lies. Brute facts more than frothy fictions.

I suspect that most people would be deeply bothered living in a fake world, no matter how pleasurable it was.

Nozick’s original experience machine was dreamed up in the 1970s, but it’s only now that technology is turning his idea into a potential reality. We still have a way to go until we have the level of immersion Nozick envisioned, but it’s near enough to make the question pertinent.

When gaming or VR becomes more exciting and brilliant — if we can spend hours of our life immersed in a world of dragons or starships or just an idealized version of reality — would people bother with the real world? Why spend all that energy and endure all those hardships in a difficult world when a life of simple pleasure is just a VR headset away?

More than half a century on, is Nozick still right to say that most of us would choose reality over VR?

Why virtual reality is necessary on a planet of 11 billion | Big Thinkwww.youtube.com

Is truth the greatest virtue?

The experience machine raises another important consideration: why do we care about truth or reality in the first place? We might be inclined to say that it’s simply a natural condition of being human, that we dislike being duped or lied to, and that we’re biologically wired to seek answers and truth. Or, we might say that it’s entirely cultural and ebbs and flows as societies change. It might be, for instance, that in a world of fake news and alternative facts, that generations simply start to care less about “truth” and value another metric — pleasure, perhaps — above that.

One philosopher who didn’t quite understand the obsession with “truth” was Friedrich Nietzsche. In the first chapter of his Beyond Good and Evil, titled “The Prejudice of Philosophers,” Nietzsche asks us to consider what it is about truth and certainty that is admirable or worthy in itself. He writes:

“Of all the value which may belong to the true, the positive, and the unselfish, it might be possible that a higher and more fundamental value for life generally should be assigned to pretense, to the will to delusion, to selfishness, and cupidity.”

It’s a provocative and challenging question. If someone says to us, “But that’s not true!” or, “She’s a liar!” Nietzsche is there to reply, “So what?” In his unique and iconoclastic style, Nietzsche frames the pursuit of truth as an unfounded, ungrounded obsession or fixation. There’s nothing about the essence of truth that means it must be the highest of all virtues or placed at the top of the podium.

Could VR be the death of reality? 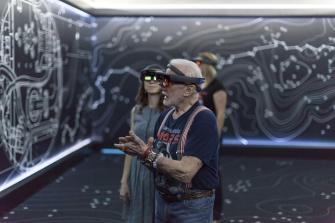 Despite Nietzsche, and despite a century of propaganda and media manipulation, people do still care about reality. I suspect that most people would be deeply bothered living in a fake world, no matter how pleasurable it was. Something sticks in the craw when we’re being lied to or when things aren’t real.

A virtual reality boyfriend or girlfriend still seems to count for less than a real one. Watching a flock of birds move across a setting sun against snow-tipped mountains is more significant when it’s not a pre-recorded movie reel. Reproducing a virtual version of a loved one who has died still would not take away the grief or sense of loss.

The fact is that truth does matter. But, with virtual reality becoming a mainstay, and whole generations of people spending hours in virtual environments, who’s to say that it will always be this way?

Tags
Emerging TechphilosophyTech Trendsvirtual reality
In this article
Emerging TechphilosophyTech Trendsvirtual reality
Related
Thinking
Why you should laugh at yourself, according to Seneca and Nietzsche
“It is more human to laugh at life than to lament it.”
13.8
Why the origin of life and the Universe itself might be forever unknowable
There might be a hard limit to our knowledge of the Universe.
Strange Maps
Europe’s stunning digital divide, in one map
Some Europeans really don’t want to use the internet.
Thinking
Bonhoeffer’s “theory of stupidity”: We have more to fear from stupid people than evil ones
Evil is easy to identify and fight against; not so with stupidity.
Thinking
Can’t move on? Here’s what the Buddhist idea of anattā teaches about letting go
Give yourself (and others) a break.
Up Next
The Present
Contact-tracing apps have serious physical, biological limitations
Contact-tracing apps can be a useful tool for public health, but they have considerable false positive and false negative rates.