Do you get enough rest? Probably not. Even on a weekend, you are most likely surrounded by family and friends, who are great and well-meaning, but wouldn’t it be better if they could all just leave you alone, at least for a few peaceful  hours?

It turns out you don’t need to feel guilty about such feelings. Most of us would like some more rest and what we may find most restful is spending time alone.

This conclusion is the result of a year-long online survey “The Rest Test” that questioned 18,000 people in 134 countries. Its goal was to understand “subjective experiences of rest,” and if rest has an effect on overall health and a sense of well-being.

The research was a collaboration between BBC and Hubbub, an interdisciplinary research collective run by Durham University. It includes academics, mental health experts, but also artists and poets.

What the researchers found is that 68% of the surveyed would like more rest. The average amount of rest people estimated to have had the previous day was 3 hours and 6 minutes. The optimal amount of rest linked to a high sense of well-being was found to be 5-6 hours.

Keep in mind, that the respondents were allowed to define “rest” as what that means to them. So, for close to 40% of the people that meant walking, with 16% choosing exercising, while for almost 60% reading was the most restful activity. This was closely followed (at over 50%) by being in nature. 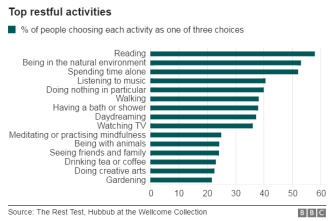 Interestingly, being by yourself while resting was a component of a number of the top choices. In contrast, social activities like hanging out with friends and family was a desired restful activity for just over 20% of the surveyed. It’s not hard to conclude that most people ultimately need rest from people. Socializing may be fun but not restful.

“People said that when they were on their own mostly they were focused on how they were feeling, so on their body or their emotions,” said the survey’s co-writer Ben Alderson-Day, a psychologist from the University of Durham.

What’s more, it’s not that we need to be alone so we could think things over. Chances are, we turn any kind of thinking off the moment we can.

“People said they were only talking to themselves in their head 30% of the time,” said Alderson-Day.”There is a hint that when you’re on your own, as well as switching off from other people, you get the chance to switch off from your own inner monologue as well.”

The survey also revealed that perception of rest matters greatly. We need to feel rested to feel good about ourselves. People who didn’t feel the need to get more rest scored twice as high on their well-being than those who needed additional rest.

“We really need to challenge the assumption that if you take more rest, you are more lazy. The fact that people who are more rested seem to have better well-being is an endorsement for the need for the rest,” said Professor Felicity Callard of Durham University, director of Hubbub.

Indeed, while our methods for relaxation differ individually, most would agree that the realities of modern life are highly demanding, stressful and anything-but-restful or focused on increasing our sense of well-being.

Tags
alonerelaxationrestsocialstudy
In this article
alonerelaxationrestsocialstudy
Related
The Present
Shame has an evolutionary purpose, say researchers
A new study finds why shame is important for human societies.
Neuropsych
What’s better for your brain: 15 minutes of jogging or 15 minutes of relaxation?
A new study compared cognitive boosts from running versus relaxing.
Health
The best treatment for depression lies in our evolutionary history
Thanks in no small part to the digitization of our social lives, depression is becoming a bigger and bigger issue in western societies. So how do we reverse it?
▸
5 min
—
with
Johann Hari
Health
How the brain controls sex and attraction
Researchers discover how the brain triggers our attraction to the opposite sex and sexual behavior.
Neuropsych
Want to fall asleep faster? Try this 5-minute technique
Before you reach for another glass of warm milk, read this.
Up Next
Strange Maps
10 Jewish Homelands Outside Palestine
A Jewish state in Alaska?