While there are constant scientific efforts to find a cure for autism, some people do not feel a cure is necessary. In fact, they see neurodiversity as a new civil rights movement.

To its proponents, neurodiversity sees neurological differences like autism as genetic and “the result of normal, natural variation in the human genome,” as said John Robison, a writer on autism issues, in Psychology Today.

They see the search for a cure to autism as something in the vein of searching for a “cure to gayness”.

Indeed, if there is no currently available cure for 1 out of every 68 children in the US who have autism, or about 1% of the world’s population, that’s a lot of people who are trying to lead regular lives despite a varying degree of difficulties. And this number is rising as autism is the fastest-growing developmental disability (according to the CDC), with boys 5 times more likely to develop autism than girls. 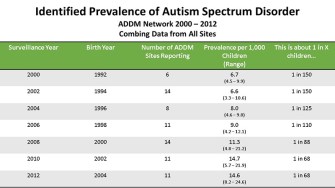 Should society view such a large group of people as disabled or should it see them merely as different and find a non-judgemental path towards incorporating folks on the autism spectrum? This would include allocating budget resources going to what could be unnecessary medical research towards improving the lives of those who are diagnosed as neurologically diverse.

The autism rights movement (ARM) looks to foster greater acceptance of people with autistic behaviors, therapies that focus on coping skills rather than cures that would imitate “normal” or “neurotypical” people, and the need to recognize autistic people as a minority group.

A number of organizations advocate this type of approach. These include the Autism Network International, Aspies for Freedom (which established June 18th as an Autism Pride Day), the Autistic Self Advocacy Network, and the Autism Acceptance Project. Among their work to advance the rights of autistic people, some ARM groups go so far as to actively advocate against organizations like Autism Speaks and others that work to find a cure, looking to change what they see as detrimental “cure culture“.

Understandably, controversies have followed such groups. As reported in this New York Times article, some autism email lists have been criticized for calling parents who are looking to cure their children as “curebies” who are depicted as “as slaves to conformity, so anxious for their children to appear normal that they cannot respect their way of communicating“.

As Julia Bascom from the Autistic Self-Advocacy Network told to the Daily Beast:

“The idea of a cure for autism doesn’t make sense. Autism isn’t a disease or an injury; it’s a neurodevelopmental disability that shapes our brains differently. If I can’t talk, does it make sense to look for a pill for that, or should my speech therapist help me learn how to type or sign instead? Is flapping my hands or intensely and obsessively loving something ‘weird’ or wanting to be by myself the psychological equivalent of diabetes, or is it a natural and beautiful part of human diversity?

One criticism of the autistic rights movement stems from the perception that it is being led by high-functioning autistic people, like those with Asperger’s syndrome. While they may exhibit certain symptoms on the autism spectrum, many with Asperger’s are able to lead lives similar to a non-autistic person and find the idea that they need to be “cured” offensive.

But to people on the low-functioning end of the spectrum, this approach might prove detrimental as it can prevent or delay treatments that they need and want. While differences in race or sexual orientation can cause societal oppression, they are not physically disabling a person in everyday life like neurological issues.

From heated arguments over vaccinations to its burgeoning civil rights push, it is clear that autism is a very emotionally charged topic and its increasing prominence is underscored by the rising number of diagnoses. Whatever may be the cause, how we view people who are autistic is a significant social challenge that needs discussion and action.

"Such studies will lead to a better understanding of brain development in both autistic and typical individuals."

Poland has become an increasingly unwelcoming place for the LGBTQ community. Fifty diplomats hope to change that.

In "Douglas," the Australian comedian opens up about her autism diagnosis.

If There Are Other Dimensions, Where Are They?

Theoretical physicist Brian Greene discusses how we may not be able to see other dimensions.