Jia Lijun loved a female walrus that lived at a Liagoning province zoo, so much so he decided he needed a selfie with her. So the businessman sidled up to the one-and-a-half ton creature. The walrus appreciated his affection and decided to give him a hug. The problem is a walrus hug is a bit more aggressive than the human variety. Both Lijun and the zookeeper who tried to save him were drowned to death by the enthusiastic marine mammal.

While this might seem to be an outlier in the billions of selfies taken each year, you have to wonder how we’ve become so separated from our environment—and so obsessed with fulfilling our every whim—that we’d think stopping in the middle of pretty much anything to take photos of ourselves is a good idea. While this addictive habit is many things, journalist and novelist Will Storr decided to investigate the origins of self-obsession in his latest book, Selfie: How We Became So Self-Obsessed and What It’s Doing to Us.

After writing The Unpersuadables: Adventures with the Enemies of Science, Storr began wondering what made us focused on our interior desires and hopes. For example, as he told me, why do people make decisions due to their biases and prejudices even when they don’t help society, or even themselves? He knew tribal allegiances play an essential role, but the depth of our individualistic focus ran much deeper than even he suspected. This obsession, he posits, has resulted in increased suicide rates and numerous emotional disorders.

The book starts at the end of the story, in a sense. In the US, suicides recently hit a thirty-year high. A recent American freshman survey found more young students felt overwhelmed in 2016 than in 2009. Self-harm rates are jumping in the UK and US; eating disorders are also increasing. Steroid use is through the roof.

Storr believes the connective tissue between these phenomena is perfectionism, which he traces back to ancient Greece. He is not alone in this assumption. In her 1942 book, Mythology: Timeless Tales of Gods and Heroes, the classicist Edith Hamilton cited Greek culture as the first to idolize gods as humans; previously gods were represented by animals, animal-human hybrids, or elements. While Hamilton notes that Greeks transformed our perception of gods from fear to beauty, they also championed the human form—namely, a steeled body—as the ultimate representation of divinity.

The psychological ramifications of such a depiction were all but guaranteed. Emotionally volatile and highly reactive cultures followed suit, focused on the success of the individual instead of their group’s wellbeing. The foundation of this ideology, Storr writes, resides in an enduring need for self-improvement:

This idea—of the individual as a node of value that had the potential to improve itself—birthed the modern Western civilization of freedom, celebrity, democracy and self-improvement that we live in today.

Nothing was more indicative of this than the American self-esteem movement birthed in the nineteen-sixties. Storr points to Esalen, the famous retreat center located at the base of a cliff in Big Sur, California, as ground zero for the mindset fusing Eastern and pagan philosophies with alternative medicine, Gestalt Practice, and organic food. While many progressive ideologies grew from a soak in Esalen’s hot springs, this yearning for the perfected individual created the conditions for selfie culture.

Yet we have faith in a sort of fixed identity: I’m vegan, conservative, cynic, liberal, threads woven through every situation that often blind us to the bigger picture. Opportunities for empathy and understanding are thwarted. Each case offers an opportunity to stamp our demands on the situation, even when the situation requires listening instead of a soapbox.

These ideas are quite middle class, almost a spiritual procedure in that they go deeper than just mere pleasure. There’s this great idea in modern culture that people need to be authentic, that we all need to be getting in touch with our real inner selves and being real and true and honest with people and not giving any bullshit. And it begins with America, which is why California is so crucial to the story of the Western self.

Donning his anthropological hat, Storr researched the contours of Greek society—literally, as in the rocky coastlines. Unlike prior interdependent cultures, some Greeks made olive oil while others ran small businesses, fished, and tanned hides. Bartering too is tribal; small group success beat out national prosperity. Greece’s ecology fostered individualistic patterns of behavior, which helped influence their philosophy and mythology and, due to the stories they told themselves about themselves, identity. 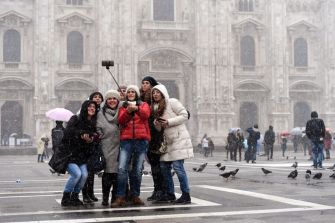 Humans evolved in large part thanks to the awareness of our environment. Self-obsession puts the emphasis on us, making us oblivious to our surroundings. (Photo by Miguel Medina/AFP/Getty Images)

We too are running such neurological and social hardware. In a prosperous America that survived the Great Depression and World War II, as beneficiaries of the Industrial Revolution and leaders in the Technological Revolution, our citizens turned inside to perfect what they felt could be utopian outside. A booming economy and the strongest military on the planet allowed residents to imagine our economy as a spiritual birthright and war as unnecessary, even as the protection offered by those soldiers afforded us an opportunity to thrive as never before. A filter bubble was constructed, one Storr believes Esalen encapsulated even as power struggles engulfed the organization’s leadership.

Esalen birthed the self-help workshop, Erhard Seminars Training (est), which continue today as the Landmark Forum—every fan of The Americans recognizes these emotionally gritty sessions—as well as the self-esteem movement promoted by California State Assemblyman John Vasconcellos, the man responsible for injecting scientifically dubious claims of the benefits of self-esteem into the public education system (and national mindset).

Storr spends an entire chapter tracing the fascinating story of Vasconcellos and his struggles first with himself and then fighting against an emotionally conservative legislature. The politician hid evidence that self-esteem was not all it was cracked up to be. By the time defectors were heard, it was too late: Californians, and by extension Americans, were enthralled with the notion that all of society’s ills were due to not loving ourselves enough. Money poured in to help us acheive this goal. As Storr writes,

Efforts to boost self-esteem hadn’t improved school performance at all. If anything, they’d been counterproductive. Neither did self-esteem help in the successful performance of various tasks. It didn’t make people more likable, in the long term, or increase the quality or duration of their relationships.

Much attention has been given to the denial of facts in American right wing and evangelical politics, yet liberals (and according to Storr, neoliberals) are guilty of the same. The intensive focus on the self is not limited to a political party and, regardless of social dynamics, biology wins out. “The people who took to selfie-culture with such ease were the children of the self-esteem generation,” Storr writes. Parents my age, the same as Storr’s, are accused of too much coddling, which is turning out to be a measurable truth.

During our conversation, I mention selfies are not limited to millennials, though they take the brunt of the flack, an assessment Storr agrees with. This inward-focus is not to be foisted upon the youngest generation alone. If anything, as recent occurrences in Parkland, Florida and elsewhere have shown, a self-correction is happening, one that places less emphasis on the self. As psychologist Jean Twenge noted last year, some teenagers are becoming impatient with their parents’ inattention due to the elder generation’s obsession with their phones.

In every age group, this drive toward perfectionism is prevalent, however. Los Angeles residents treat cosmetic plastic surgery as nonchalantly as a graphic designer touches up digital images. As I previously wrote, the number one increase for cosmetic plastic surgeries in 2016 was male teenage breast reduction. More and more teens are getting cosmetic “fixes”—229,000 that year alone.

But what is being fixed? Certainly not self-esteem, the very movement that was supposed to make things better. As Storr writes, low self-esteem equates to high neuroticism. His argument is not against self-esteem per se, only putting so much emphasis on it that it blinds you to everything else—that you become unhealthily obsessed with yourself.

Will Storr has written an exceptional history of what has brought us here. While not a prescriptive—thankfully, there is no “five steps to fixing this” addendum—he is not without hope. We just need a wider angle lens than our smartphones currently offer. We need to search beyond the edges of our selfies to remember a diverse world exists outside of the one formed in our own heads. What we sacrifice in self-obsession we gain in self-awareness—and the fact that the “self” is not an isolated but interdependent construct—which turns out to be a healthier option for ourselves and everyone around us.

Related
13.8
What kind of intelligence is artificial intelligence?
The initial goal of AI was to create machines that think like humans. But that is not what happened at all.
The Present
What’s effective altruism? A philosopher explains
Some effective altruists “earn to give” — they make as much money as they can and then donate most of it to charities.
Sponsored
How to avoid family fights about money
No family is immune to money conflicts, no matter how much they love each other. Here’s what to look out for.
L&D strategy
Best practices for a needs analysis [Templates included]
Conducting a thorough needs analysis requires care, curiosity, and open-mindedness.
Neuropsych
Memory and the benefits of forgetting
Forgetfulness isn’t always a “glitch” in our memories; it can be a tool to help us make sense of the present and plan for the future.
Up Next
Surprising Science
99% match: Forensic anthropologists may have solved the Amelia Earhart mystery
Looks like we finally know some answers that they didn’t in 1940.