The Stunning Rise in Plastic Surgery Shows a Psychological Crisis

In 2016 Americans spent $16.4 billion on cosmetic plastic surgery. What does that say about the health of our psyche? 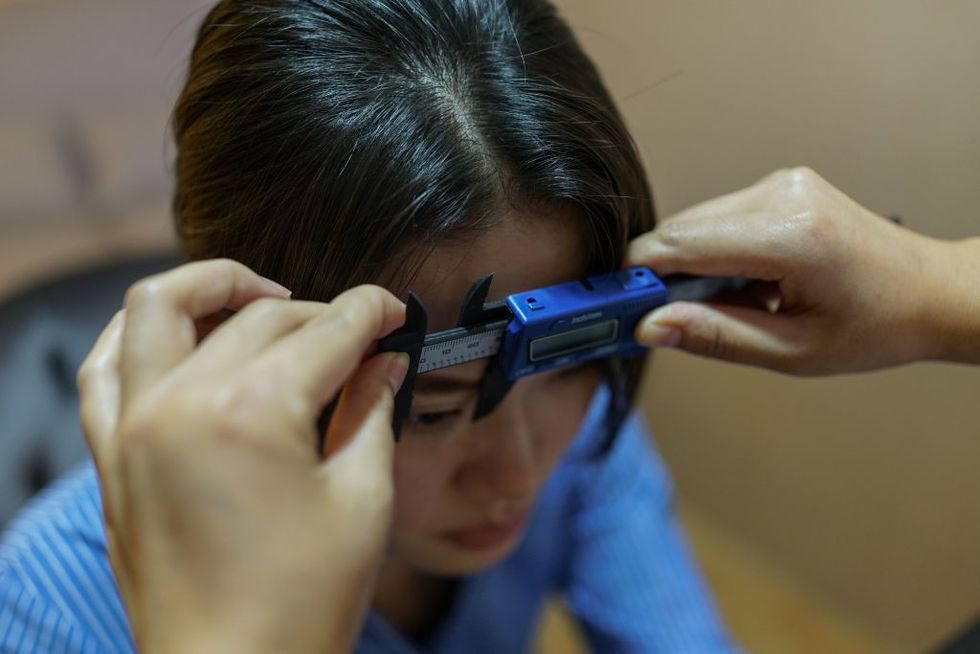 Over a billion phones in China are equipped with apps produced by Meitu, Inc. Launched in 2008, the signature app, also named Meitu (“beautiful picture”), is a basic photo-editing program. The inventors originally imagined it as a general-purpose app until they noticed user data. Teenage girls were by far the most engaged audience. Today the company is worth more than $6 billion.

Meitu not only changed the perception of a generation in China, it also gave birth to a specific look: wang hong lian, “Internet-celebrity face.” Executives and users claim it to be an expectable backlash against the lack of individuality demanded by Communism for so long. And yet, critics reply, this has created its own form of uniformity. The average user spends forty minutes doctoring a photo before daring to release it for public inspection. A two-person photo demands at least an hour.

Revenue is in part generated by cosmetic companies brandishing lucrative deals with wang hong elite, as well as by partnering with Meitu, Inc, to virtually stylize and then sell actual product to adoring fans—embedded links make shopping irresistible. But the craze has also created another trend: plastic surgeries in hopes of attaining the perfect “Internet-celebrity face.”

While Jiayang Fan was reporting on Meitu for The New Yorker, she received a free consultation on what it would take to attain a wang hong face. By the end her face “resembled a military map.” The consultation is worth quoting in full, especially considering that Fan was effectively informed that, even with all of this work, she’d never achieve an Internet-worthy face.

My jaw was too square, my cheekbones too broad, and my eyelids too droopy. My nose bowed outward—a “camel hump”—and I had a weak chin. After the half-dozen or so procedures that it would take to ameliorate these flaws, we could move on to smaller things, which could be dealt with by a combination of Botox (for my shrunken forehead, my jaw muscles, and the creeping crow’s-feet around my eyes) and filler (for my temples, the pouches under my eyes, my nasal folds, and my upper lip). The cost would be more than thirty thousand dollars.

Americans also love work. We talk about it all the time: jobs growing the economy, getting this group of workers more work, technology alleviating certain forms of work in this sector, the work we put in at the gym, the work it takes to run a business and family. Yet there’s this other type of work so prominent in our culture, the work we pay for to hide the work we’re not willing to put in: the work associated with a cultural ideal detached from the emotions and psychology of what that work entails.

This sort of work is more psychological than physical—we adore illusions, and any illusion that can temper the ravages of old age are considered to be worth the price. A little work here, some major work there, whatever works to stave off the tragedy of earthly decline. To stay relevant. To stay young.

We might not have Meitu, but Instagram celebrities with mutant bodies claim millions of fans. According to the American Society of Plastic Surgeons 2016 was its most successful year to date: 290,000 cosmetic breast augmentations; 131,000 face lifts; seven million Botox injections. Only laser hair removal and microdermabrasion were down from the prior year, but even those numbers—1.1 million and 775,000—are staggering.

This trend cuts across all age groups. Once the domain of the aging, now Internet-celebrity faces (and butts and legs and breasts and arms) are available to all. There were 229,000 cosmetic procedures performed on teenagers in 2016, including the fast growing field: male breast reduction. The bulk of surgeries occurred in the 40-54 age group, the bulk of that being minimally invasive touch-ups like Botox.

While 92 percent of patients were female, the 8 percent male ratio marks an increase as well. And the data are cross-cultural: the largest ethnic increase is Asian Americans at 6 percent, followed by Caucasians at 4 percent. There was no one-year change in African Americans, while Hispanic participation dropped by 2 percent. The fear of aging appears democratic even as our society seems less so.

Fantasyland: How America Went Haywire is Kurt Andersen’s exhaustive 500-year history of an America that has produced creationism and reality television and a reality television president, a turn of events he could not even have foreseen when he began work on the book in 2013. He goes to great lengths to show how this detachment from what matters most has slowly, and then quickly, eroded our national conscience over the course of a half-millennium.

Despite the tendency to look back at America’s founding as secular, Andersen documents the superstition that has pervaded this country since the first English immigrants dreamed of discovering the biblical garden of Eden, as well as sizable deposits of gold, in what came to be known as Virginia. The Plymouth Rock group was also seeking gold (and a quicker commute to Asia for trade). The fact that our schools’ textbook narrative has conveniently forgotten that in lieu of religious-freedom-seeking Pilgrims is indicative of our penchant for fantasizing.

One modern manifestation of over overactive imaginations is what Andersen dubs the “Kids ‘R’ Us Syndrome.” Video games, fantasy sports, and adults dressing up for Halloween are products of the Reagan era, which he calls “ranging from the benign to the unfortunate.” He points to Michael Jackson who, while in residence at his fantastical Neverland Ranch, was having cosmetic surgery to look more and more like a child every few months. The nation followed suit.

Around the same time, Andersen continues, the ubiquity of pornography made pubic hair obsolete and drove up the number of breast implants—one in twenty-five American women now have them. As trends become more extreme (like pornography itself), labiaplasty took root in Southern California, often so that a woman’s labia minora would not be noticed when they wore yoga pants.

Americans began saying and wishfully believing about round-numbered ages that X is the new Y—thirty the new twenty, forty the new thirty, fifty the new forty, and so on. Yet in so many ways they all became the new twenty, the new fifteen…we really came to believe we were kids of all ages.

We’ve long dreamed up escapes from organic reality through the invention of mythologies. From King Gilgamesh traveling the globe in search of the sacred plant that grants everlasting life to a California valley filled with code manipulators who drink chemistry all day—Soylent on the rocks, anyone?—the quest for eternity has never been far from view regardless of how elusive it always proves to be. Once doctors figured out how to physically represent these changes, the cost was never a concern.

Yet this frantic uptick in surgeries coincides with all-time high rates of anxiety and depression. The pool Narcissus couldn’t turn away from displayed a hazy outline of a human, dynamic and fluid as the rippling of lakes tends to be. Now we erase ripples, on our phone, on our flesh, without questioning the psychological cost those deletions demand.

The quest for presence—with our imperfections, with what we truly are as animals—seems even more evasive, a fact we often don’t realize until too late. Hospice dwellers desire connection, health, and freedom from pain, not fuller lips. While difficult to pinpoint the exact date we went from judging a person on the character of their actions to the character of their forehead, at some point we did, and that judgment is toxic. We pay the price every time we look into a mirror and say, “if only.”

Wrinkles mark time like rivulets carve territory. In an era defined by femininist rights and an inspiring rush toward recognizing the unity of all races, falling victim to the greedy demands of our ego benefits no one. We should wear our skin proudly, as protectors of memories and champions of equality. To hate history is to loathe identity. That’s no way to live, no way to age, no way to die. Forgetting, Neruda wrote, is so long.