In March 2017, the New Zealand government made history by passing the Te Awa Tupua Bill. A result of a 170-year legal battle led by a local Maori tribe, the bill declares the Whanganui River a legal person with “all the rights, powers, duties, and liabilities of a legal person.”

The Whanganui River is the third largest in New Zealand, located on the North Island of the country. It has always been considered sacred by the Maori Iwi people and has been an integral part of their culture and tradition, captured in the saying “I am the river, and the river is me.” 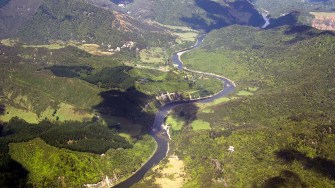 Since the 1870s, the tribes have fought for a legal recognition of their relationship with the river. They have also been concerned about the government’s impact on the river’s “health and wellbeing.”

Now, thanks to the newly passed bill, this recognition is finally a fact. The river will be jointly represented by a member appointed by the Maori community and one appointed by the government.

“Some people will say it’s pretty strange to give a natural resource a legal personality. But it’s no stranger than family trusts, companies or incorporated societies.”

Hopefully, this precedent gives a positive example to other countries as well.

Tags
justicelegalMaoriNativeNew Zealandpersonhoodrivertribal
In this article
justicelegalMaoriNativeNew Zealandpersonhoodrivertribal
Related
Life
Are animals ‘persons’? New York court hears the case of Happy the elephant
An elephant at the Bronx Zoo has become a cause célèbre for animal rights activists.
The Present
What elements make up our idea of justice?
In classical liberalism, justice leaves society better off by providing a chance for a better life.
▸
9 min
—
with
David Schmidtz
The Present
Ageism in the USA: The paradox of prejudice against the elderly
▸
4 min
—
with
Ashton Applewhite
The Present
Excessive police fines substantially decrease public safety, study reveals
Handing out tickets might be distracting police departments from working on more serious crimes.
The Present
Why rape cases should not be subject to reasonable doubt
Is it better to have the harm of 100 sexual assaults than the harm of one false conviction?
Up Next
Health
No Vaccination? No Daycare, Say Australian Legislators
Australia could soon ban unvaccinated children from attending preschools nationwide.