Happy is a 47-year-old elephant who lives at the Bronx Zoo. Although the zoo had claimed in 2006 that it would be inhumane to exhibit such a social creature by itself, that pretty much describes Happy’s current living conditions. The zoo now has one other elephant, Patty, but the two are kept separate over concerns that they don’t get along. Happy spends most of her time in a cage that’s about twice her body length, a far cry from her natural free-roaming habitat. The New York Times has previously written about Happy, and a change.org petition on Happy’s behalf has over a million signatures.

The Nonhuman Rights Project (NhRP) has taken the zoo to court to have Happy released to live out the remainder of her life at The Elephant Sanctuary in Tennessee.

Happy arrived at the Bronx Zoo in 1977 with another elephant, Grumpy, who died in 2002. The elephants were part of a group of calves purchased for $800 and imported to the U.S. by the now-defunct Lion Country Safari, and named after Snow White’s seven dwarves.

The Bronx Zoo—which is operated by the Wildlife Conservation Society (WCS)—opposes Happy’s relocation. The organization asserts it “takes excellent care of Happy and will continue to do so, along with all animals here at the zoo. Her well-being is assured by our dedicated staff and all the expertise they bring in providing excellent care for her for more than 40 years.”

On Thursday, November 19, 2020, the case will wend its way to New York State’s First Department courtroom for oral arguments. 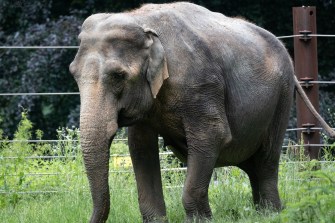 We’ve written previously about the NhRP and its legal work aimed at securing personhood rights for non-humans, including two chimpanzees named Tommy and Kiko. The premise of the chimps’ case was that they deserved protection from unlawful detention or imprisonment afforded under the legal concept of habeas corpus.

In law, there are only two things an entity can be: It can be either a thing or a person. It’s obvious that intelligent, feeling creatures—and we’re learning that more and more animals are exactly this—are not just things. However, getting courts to recognize them as persons is a heavy lift. As NhRP attorney Steven M. Wise tells Big Think, “the word ‘person’ came loaded with emotional baggage,” with people mistaking the legal term “person” as being synonymous with the common use of the word “human.”

In the end, the NhRP wasn’t able to secure the release of Tommy and Kiko to a chimp sanctuary, but nonetheless managed to move animal rights forward with a remarkable opinion by associate Eugene M. Fahey of the New York Court of Appeals. While ruling against the NhRP over legal technicalities, Fahey delivered a groundbreaking dissent about which Wise says, “I think in the years to come, that Judge Fahey’s concurrence [with NhRP] is going to be seen as the breakthrough in the United States towards gaining legal rights for non-human animals.”

“While it may be arguable that a chimpanzee is not a ‘person,'” Fahey wrote, “there is no doubt that it is not merely a thing.” He added, “The reliance on a paradigm that determines entitlement to a court decision based on whether the party is considered a ‘person’ or relegated to the category of a ‘thing’ amounts to a refusal to confront a manifest injustice.”

Fahey did disagree with the NhRP on one point—aside from the legal issue on which the court ruled against them—and Wise says that after thinking about Fahey’s perspective for the last few years, he now agrees. The NhRP is pursuing a very different approach for Happy than they did for Tommy and Kiko.

Fahey noted that with laws already on the books such as New York State’s pet trust statute that make Happy a beneficiary of legal protections, she already has rights. Following logically from that is that if she has rights, the judge pointed out, she is not a thing and therefore qualifies as a legal person entitled to habeas corpus protection.

In the past, the NhRP argued that Tommy and Kiko qualified as legal persons who would then deserve rights. Fahey’s insight has given the NhRP a far easier case to make. It no longer requires a court to invent some new status that’s neither thing nor person to deliver justice to animals. 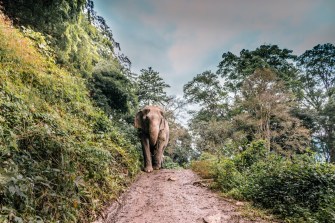 The proceedings on Happy’s behalf have been going on since October 2018. The case began in New York’s Orleans County, some 300 miles northwest of the Bronx Zoo. It was a district identified by the NhRP as perhaps holding a sympathetic view of personhood based on a case in which it granted a used-car dealership that status as a victim of a break-in. Wise recalls a sentence in the judgement that caught NhRP’s attention: “It’s common knowledge that personhood can and sometimes does attach to non-human entities like corporations or animals.”

So far, it’s been a long series of push-and-pull maneuvers between the NhRP and WCS. While WCS has generally been winning judgements, often on proceeding-related grounds, NhRP has scored some landmark victories.

In December 2018, the New York Supreme Court, Orleans County heard oral arguments regarding elephants’ rights to habeas corpus based on Fahey’s guidance. This was the first-ever such hearing on behalf of an elephant, and only the second for animals altogether. (The first was for two of the NhRP’s early clients, chimps Hercules and Leo.) The hearing resulted in the case being transferred to the Bronx as per the WCS’s wishes.

In Bronx Supreme Court Justice Alison Y. Tuitt, the NhRP found a sympathetic judge who heard an extraordinary 13 hours of arguments during which the NhRP presented testimony supporting their case from five elephant experts. Wise notes that the WCS, which employs many of its own elephant experts, curiously chose not to present any testimony from them supporting the position that Happy should remain where she is.

After hearing arguments, Tuitt described Happy, the first elephant ever to have passed the mirror self-awareness test, as “an extraordinary animal with complex cognitive abilities, an intelligent being with advanced analytical abilities akin to human beings.” She also concluded that Happy “is more than just a legal thing, or property. She is an intelligent, autonomous being who should be treated with respect and dignity, and who may be entitled to liberty.”

While WCS presented detailed descriptions of Happy’s current care, health, and status, Tuitt notes in her opinion that “none of the Bronx Zoo’s affiants present any evidence that they have studied any wild elephant, or know about any elephant’s basic social, emotional, behavioral, liberty, and autonomy needs, whether captive or wild.”

Tuitt rejected WCS position that Happy’s current living situation at the Bronx Zoo is the best option available for the elephant, stating that “the arguments advanced by the NhRP are extremely persuasive for transferring Happy from her solitary, lonely one-acre exhibit at the Bronx Zoo to an elephant sanctuary.”

Expressing regret, Tuitt felt bound by appellate court decisions regarding NhRP’s chimp cases and ruled against releasing Happy. Fahey has written elsewhere that he now believes those earlier cases in which he participated were wrongly decided.

The NhRP is appealing on November 19 to the First Judicial Department, which Wise says is not bound, as are other courts, by previous rulings. He feels optimistic that with Tuitt’s supportive decision in hand, he won’t need to spend so much precious court time relitigating the basics of the NhRP’s case. He also notes that should the WCS once again prevail, the next stop would be the Court of Appeals, where Fahey is one of seven justices who will hear Happy’s case.

Research sheds light on social behavior of these mysterious predators.
Up Next
Life