A vaccine that did not exist a year ago has proven 100 percent effective at preventing people who are at extremely high risk of infection from contracting the Ebola virus.

The recent trial took place in Guinea, a West African nation that, along with Liberia and Sierra Leone, was hit hard by an Ebola epidemic that has killed more than 11,000 people since December 2013.

Of the three nations, the virus was most active in Guinea (also where the epidemic began), so it provided scientists with an opportunity to test a new vaccine and, as it turned out, save the lives of those who received it.

The vaccine, called rVSV-ZEBOV, is composed of “an attenuated livestock virus engineered to produce an Ebola protein.” Scientists gave the vaccine to two groups of people: those who had just come into contact with an infected person and those who had been around the virus for three weeks. 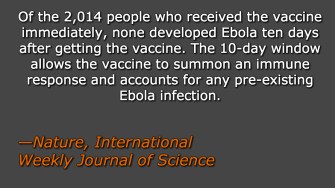 Researchers who created the vaccine used a ring technique originally developed for the famously successful smallpox vaccine. And the World Health Organization wants to build on the success of the Ebola vaccine: They will continue administering it to those at risk of infection in Guinea and are considering releasing the vaccine for general use.

Still, the rVSV-ZEBOV vaccine is considered a first-generation tool, especially since it must be stored at –80° C and it protects against a limited number of species of the Ebola virus. Researchers are already hard at work developing second-generation iterations.

Wizbang innovations capture the public’s imagination, but thoughtful, incremental development is often more valuable to those in need.
Up Next
Personal Growth

Sleep, Work, War, and Other Things We Can’t Agree On

There is no sense whatsoever that we are on the same page here, working toward some roughly agreed upon vision of a better future.