The true costs of the Afghan war, America's longest and most invisible war

The costs of the War in Afghanistan are astounding and without end, with the war about to enter its 17th year. 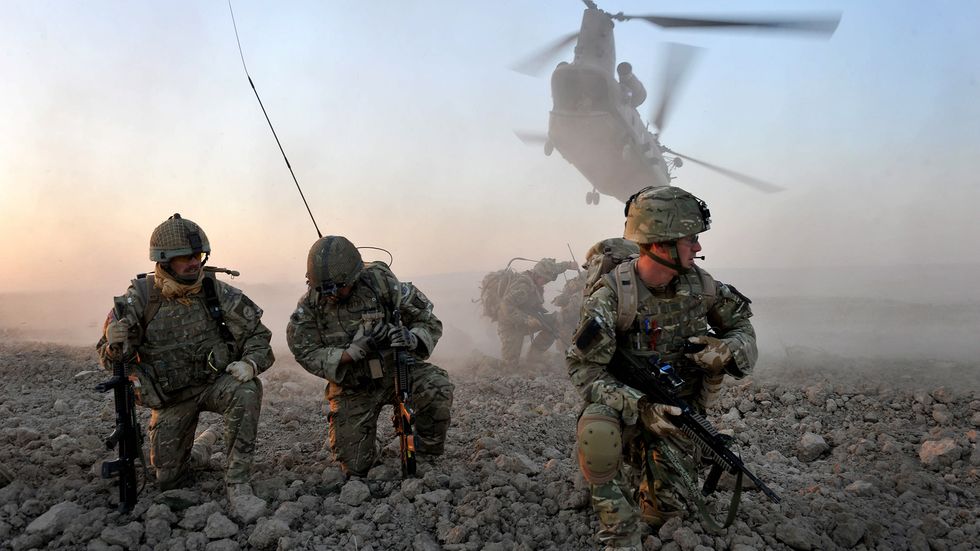 Soldiers from D Company of The Argyll and Sutherland Highlanders, 5th Battalion The Royal Regiment of Scotland, and officers from the Afghan National Police, are inserted into the area by two CH-47 Chinooks. (Photo: ResoluteSupportMedia)

How we got here

The War in Afghanistan began with the invasion of the country by U.S. forces on October 7th, 2001. It followed the shock of 9/11 and the decision by President George W. Bush to destroy the terrorist network al-Qaeda, headed by Osama bin Laden, which was blamed for the horrendous attack on American soil. Bin Laden was reportedly hiding in Afghanistan, protected by the Taliban, which then ruled the country.

Nearly 17 years and several presidents later, amassing the staggering costs of 2,372 American military deaths, 1,720 U.S. civilians contractor fatalities, over 20,000 troops wounded and likely trillions of dollars spent, the war is still not over.

The War in Afghanistan can be regarded as the longest war the U.S. has ever been involved in. While the U.S. involvement in the Vietnam War started in 1954, American troop levels and casualties went up from the early 1960s, with the war ending in 1975. The fight in Afghanistan, divided between Operation Enduring Freedom (2001–2014) and Operation Freedom’s Sentinel (2015–present) is still continuing to cause American casualties. The U.S. suffered 17 casualties in 2017 and four so far in 2018 (as of mid-July). 2017 also saw 10,000 civilian casualties, including those caused by U.S. airstrikes.

At its peak in 2010-2011, the U.S. presence in Afghanistan numbered over 100,000 soldiers. Under President Obama, the troop levels had gone down to 8,400 by 2016. Still, recognizing the fragility of the situation on the ground, Obama did not authorize a complete pullback of the American forces.

In August 2017, President Trump intensified the airstrikes and called for sending more U.S. troops to Afghanistan in a strategy to train, assist and advise more Afghan fighters. The plan has no end date and increased the number of forces in the country from 8,400 to 14,000. It must be noted that the Taliban, now numbering about 60,000 fighters, rules over a larger amount of land now than it did since when it was kicked out by the initial U.S. war effort in 2001.

How much does the war cost?

As things stand, the Pentagon announced that in 2018, that the war in Afghanistan will cost the taxpayers $45 billion just this year alone. The amount includes about $13 billion for U.S. forces in the country, $5 billion for Afghan forces, $780 million for economic aid and the remaining $26.22 billion for logistical support. If you want to add the costs up, to arrive at some overall figure for the war, estimates range from $841 billion to trillions, depending on the number of factors counted. The lower amount is proposed by Anthony Cordesman, the Arleigh A. Burke Chair in Strategy at the Center for Strategic and International Studies.

“One of the striking aspects of American military power is how little serious attention is spent on examining the key elements of its total cost by war and mission, and the linkage between the use of resources and the presence of an effective strategy,” writes Cordesman in his report.

Neta Crawford, the co-director of the Cost of Wars Project at Brown University, sees the spending on the War in Afghanistan to approach $2 trillion since 2001. That doesn’t even include future costs of up to $7.9 trillion like the spending by the Department of Veteran Affairs and the interest on the money Americans borrowed to pay for this military effort. Notably, the U.S. Congress did not pass a tax to finance the war and instead passed the Bush tax cuts.

Reports by the Watson Institute also put the true costs in the trillions. The Institute estimated that $4.8 trillion was spent through 2016, while Harvard economist Lina J.Blimes puts that cost from $4 to $6 trillion.

The exorbitant costs also bear many inefficiencies and wasteful spending, reported by the government accountability agency SIGAR. The overseer found half a billion dollars squandered on planes unusable in Afghanistan, millions spent on unused command and control centers, gas stations that cost almost 90 times more than necessary, among other instances of “outrageous misuse of U.S. taxpayers’ money,” as it states in its 2018 report.

What’s next for this war that will not end? Despite the Trump-ordered troop surge, the situation on the ground has not changed much, leading some observers to think that the president is ultimately impatient to have a resolution to the war and will pull back the U.S. forces eventually. Indeed, the White House ordered direct talks with the Taliban, which currently controls from 10% to 45% of the territory, depending on whom you ask, in an effort to create a breakthrough. The Taliban appears willing to talk but no concrete plans have been announced yet.