The Chinese smartphone maker Huawei has for the first time surpassed Apple in quarterly sales, making it the world’s second-largest seller behind Samsung.

Huawei sold about 54 million smartphones last quarter, up more than 40 percent from the same period last year. The Chinese company is the top smartphone seller in its home country, and last quarter it achieved a record-high global market share of 15.8 percent.

That’s not to say Apple is underperforming. The California-based company just saw its highest-ever third-quarter revenue at $53.3 billion, and it reported a 32 percent jump in profit from 2017.

In the third quarter, Apple sold 41 million units. Meanwhile, Samsung, which has long been the world’s top smartphone seller, sold 71.5 million units—a decrease of about 10 percent from last year, according to the International Data Corporation’s Worldwide Quarterly Mobile Phone Tracker.

“The continued growth of Huawei is impressive, to say the least, as is its ability to move into markets where, until recently, the brand was largely unknown,” Ryan Reith, an IDC vice president, said in an accompanying statement. “For most markets, the ultra-high end ($700+) competition is largely some combination of Apple, Samsung, and Huawei, depending on the geography, and this is unlikely to change much in the short term.”

Never heard of Huawei? That’s probably fine with the U.S. government, which has for years been warning that the Chinese company poses national security threats and could potentially use its infrastructure to “gain positions of power inside our telecommunications network.”

In 2012, a House Intelligence Committeereport outlined concerns about Huawei’s ties to the Chinese military, its unclear business structure and its failure to answer other “key questions” U.S. officials had posed to company leadership.

These concerns have prompted the U.S. government to successfully pressure American companies like AT&T and Verizon not to carry Huawei smartphones, such as the P20 and Mate 10 Pro, both high-end smartphones that sell in the $600 to $800 range. 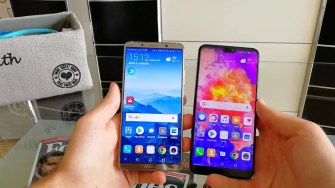 “The problems that Huawei is having with the U.S. government are unlikely to blow over anytime soon,” Avi Greengart, an analyst at Global Data, told CNETin March. “Without carrier or even big-box retail distribution, it is basically impossible to sell premium smartphones in the U.S., and the political pressure to keep Huawei phones [out] is clearly rising as the U.S. and China edge toward a trade war.”

The rest of the world is less wary, however, considering Huawei has built relationships with carriers and corporations in more than 170 countries.

“We have earned the trust of our partners across the global value chain,” said a spokesman.

Albert Einstein played a mean violin.
Up Next
Starts With A Bang

Gazing upon the red, blood Moon during totality is only part of the wonders awaiting you.On July 27, 2018, the longest total lunar eclipse of the century took place. Totality lasted […]