Will the ketogenic diet really help you lose weight?

A lot of the research on ketosis is positive, but the trending of the diet brings its own problems. 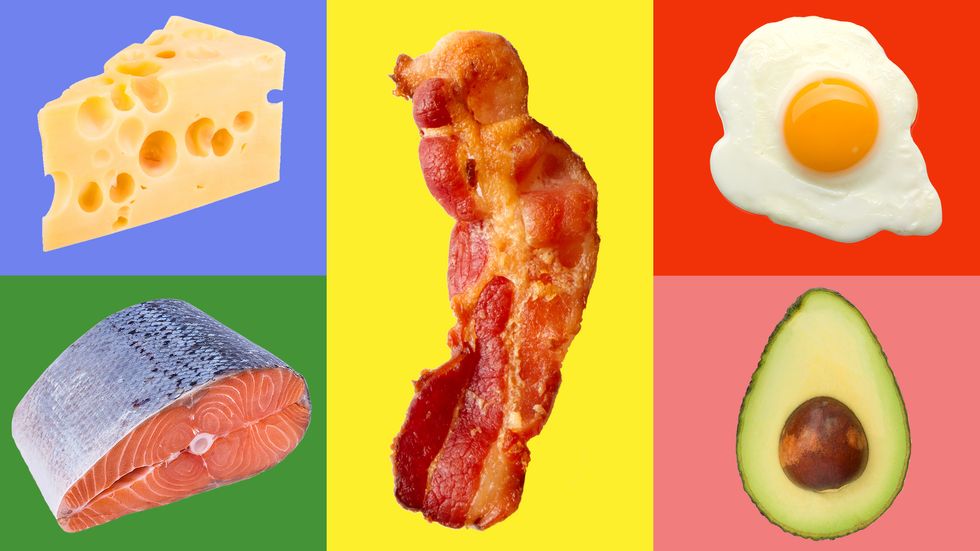 These foods make up part of the ketogenic diet. (Image: Jana Roose/Big Think)

Celebrities love to talk about their aging hacks. The proliferation of holistic wellness blogs has been in part due to actors and actresses recommending personal tips, science be damned. Halle Berry is only the latest in a series of celebs offering diet advice, and for her, it’s all about ketosis.

Not that Berry’s experiences aren’t without merit. A longtime sufferer of type 2 diabetes, she believes the diet may even reverse the effects of the disease. A 2005 study offers similar advice:

“The LCKD [low-carbohydrate, ketogenic diet] improved glycemic control in patients with type 2 diabetes such that diabetes medications were discontinued or reduced in most participants. Because the LCKD can be very effective at lowering blood glucose, patients on diabetes medication who use this diet should be under close medical supervision or capable of adjusting their medication.”

As for “slowing down the aging process,” as Berry suggests, again, there is proof that excessive amounts of carbohydrates and sugar, which defines what we now refer to as the “traditional American diet,” speeds up aging by breaking down the human body’s metabolic, immune, and cardiovascular systems. But does this make the ketogenic diet healthy?

“Perhaps” is the best answer anyone can offer at the moment. There are certainly plenty of anecdotal success stories. Women’s Health reports on one woman who dropped 60 pounds over the course of a year—a healthy span of time, it should be noted, as many fad diets promise much quicker (and more dangerous) weight loss solutions. Spending six days every week at Equinox Fitness, I’ve also heard many positive stories from trainers, instructors, and members. The ketogenic diet has been shown to improve cognitive function and volunteers in a clinical study have fared better burning ketones than on the previously mentioned American diet.

What's in that diet that’s so damaging? Carbohydrates. Not carbs outright, just our excessive dependence on them, and the sugar it turns into inside your body. Yet carbs are the reason some people are skeptical that ketosis is sustainable—we still need them.

Humans require three macronutrients for survival. Since protein is no longer trendy, the gaze has turned to fats, the main driver of a ketogenic diet. At nine calories per gram, compared to the four you’ll get from carbs or protein, fats provide plenty of energy to utilize. When you limit your consumption of carbs you force your body to produce ketones to use for energy, hence ketosis.

Fats are having their moment. Unlike previous conventional wisdom, the tides have turned: fats are not the demons they once were. Part of the problem, says biomedical science expert Dr. Rhonda Patrick, is that studies showing fats to be unhealthy do not take carbs in the diet of volunteers into consideration. She says that the interaction of carbs with certain fats results in a particularly insidious effect.

I previously discussed my own experiences carb-cutting, to great success: the disappearance of anxiety disorder and canker sores; the elimination of chronic GI problems; ten pounds shed that have yet to return. Anecdote is not data, but I've been told of similar results on numerous occasions.

The real problem with how the ketogenic diet is being presented is not the underlying principles of using ketones for fuel, but the extremity required to remain in ketosis. You’ll find rates as low as 80 calories per day from carbohydrates, which is basically starvation in a 2,000 calorie diet. That’s a whole lot of meat, coconut oil, and avocados.

Regardless of this moment's hype, vegetables are one of the most important sources of nutrition. This is understood in the keto community—cruciferous veggies are treated like godsends. Processed carbohydrates such as bread, pasta, and pretty much everything arriving at your home frozen are the real issue.

Which brings up the question: Why can’t we just cut back on carbs? Does everything have to be measured out to a percentage point in order to live a healthy life? The ketogenic diet is trending right now mostly as a response to the innumerable foodstuffs masquerading as nutrition that dominates our society. Turning our back on standard fare is not only healthy, it is necessary for physical and cognitive well-being. Do we have to go to such extremes to send the message?

With a move to make ketones the “fourth macronutrient” based on one study of 39 elite cyclists, we have to remain skeptical of the current onslaught of marketing. Protein powders are now packed with ketones (at a higher price, obviously), with exogenous ketones becoming the new fish oil on supermarket shelves.

How far we’ll go in our quest to “hack” every part of our bodies remains to be seen. Will the ketogenic diet help you lose weight? Possibly. Unfortunately that’s not the answer most people are looking for. An empty promise is more seductive than a boring factoid.

What if instead of grabbing a slice of pizza you sprinkle olive oil and lemon on an avocado? Or scoop out a tablespoon of almond butter rather than opening the microwave door? Or reading what’s really inside of that bottle of salad dressing?

These are the mundane aspects of nutrition that require attention. South Beach, Mediterranean, The Zone—too many fads have come and gone. Adding science-ese to the marketing of exogenous ketones is a certain indicator that in a year’s time the next diet up will include even more Latin terms.

For high-level training, diabetes maintenance, and as a beginner’s roadmap to weight loss, research regarding the ketogenic diet is on solid ground. But what’s really needed is a look into the many processed foodstuffs we believe to be food. You don’t have to starve your body of carbohydrates to maintain a healthy weight. You might just need to cut down.