Should marijuana really be banned from the Olympics?

The list of substances banned from Olympic competition is staggering. Marijuana is on the list, but derivative cannabinoids aren't. Whats going on, and should marijuana even be banned? 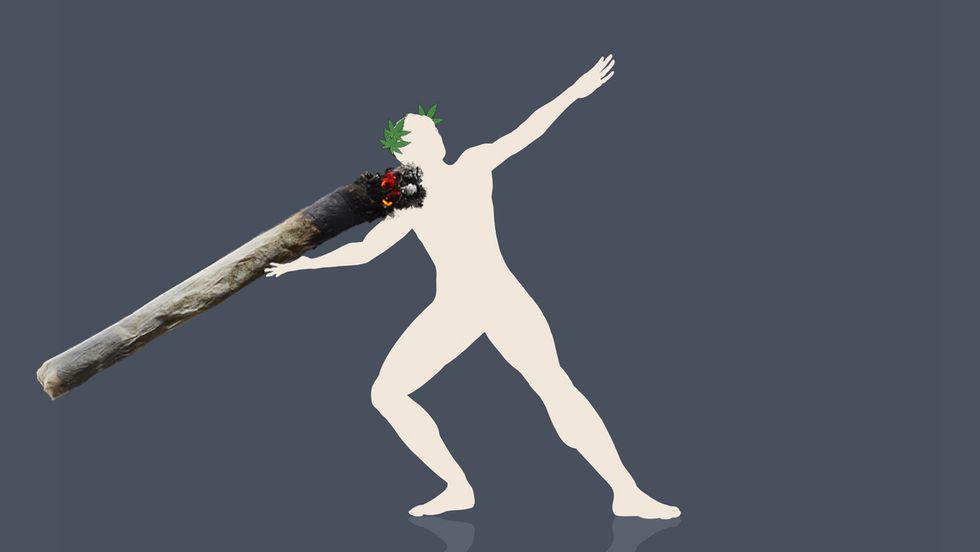 The giant joint throw, an Olympic event coming to the 2028 Los Angeles Olympics?

The introduction of a new Olympic sport is a big deal. When snowboarding was introduced at the 1998 Winter Olympics in Nagano, Japan, the professional Canadian snowboarder Ross Rebagliati was ecstatic to win the first gold medal in his sport. But the victory seemed short-lived.

The International Olympic Committee (IOC) stripped Rebagliati of his gold when 17.8 nanograms of marijuana were discovered in his blood. In another twist, the IOC returned Rebagliati's gold medal when it realized marijuana wasn't on its list of banned substances.

There began a contentious argument about marijuana's place in the Olympics. While the Olympics committee added marijuana to its list of banned substances in 1999—the same year the World Anti-Doping Agency (WADA) was created to address growing concerns over illicit substances use at the Olympic Games—Rebagliati claimed his positive test resulted from second-hand smoke.

Yet Rebagliati never denied his love for marijuana. Today he runs a cannabis branding company and is an advocate for using marijuana as a performance enhancement drug—the very argument that almost lost him the gold.

Similar to states like Colorado and California, WADA has been loosening its cannabis restrictions in recent years. In 2013, the committee upped the allowable limit of marijuana to 150 nanograms of THC per milliliter of blood. This translates to “smoke all you want, just not during competition.”

If substances enhance performance, why are they banned?

Substances are banned by WADA for varying reasons of performance enhancement. The anti-doping body's message to athletes is that you can’t give yourself an edge by increasing your body’s ability to perform, but you also cannot gain an edge by providing pain relief or other recovery methods through chemistry.

WADA's 2018 list of banned substances is exhausting in its specificity. There are 43 anabolic steroids listed, with the addendum that, “other substances with a similar chemical structure or similar biological effect[s]” are also banned. Such opened-ended language is the agency’s way of buffering against slight molecular changes by crafty scientists. But even this list is of exogenous drugs only—those created outside the human body through the miracle of industrial chemistry. The list of endogenous steroids administered exogenously (as amateur cyclist Bryan Fogel does in the incredible Olympic doping documentary "Icarus") is equally long.

Also exhausting in length is the list of peptide hormones (which raise energy levels by regulating energy metabolism, cardiac function, and stress) and growth factors (which enhances the delivery of oxygen to muscles). Beta-2 agonists, usually used to treat asthma and pulmonary disorders, hormone and metabolic modulators, and diuretics are also banned.

Then there are substances banned in-competition: stimulants of all kinds, including cocaine and epinephrine, and narcotics such as fentanyl, morphine, and oxycodone (but not caffeine).

So what about marijuana specifically?

Cannabinoids, the 113 compounds that exist in marijuana, get their own category. While cannabis, hashish, and marijuana are called out by name, with synthetic cannabinoids cited as well, the medicinally accepted cannabidiol gets a pass. While cannabidiol makes up 40 percent of the plant’s extract it does not have the same psychoactive effects as THC.

Cannabidiol is used in the treatment of addiction and epilepsy, as well as in pain relief for such conditions as multiple sclerosis. Add therapeutic recovery to the list. One 2012 study discovered that cannabidiol is useful as an anti-inflammatory agent, which was backed up by another study that year in mice with acute pancreatitis. A 2014 study found that cannabidiol is well-tolerated in humans, at least up to 1,500 mg per day.

A one-ounce bag of medicinal marijuana is displayed at the Berkeley Patients Group March 25, 2010 in Berkeley, California. (Justin Sullivan/Getty Images)

Given its positive role in burgeoning research, why does WADA continue to outlaw marijuana? The committee offers three responses:

First, performance enhancement. “While the effects of marijuana can decrease hand-eye coordination and distort spatial perception, there are other effects that can be performance enhancing for some athletes and sport disciplines. Cannabis can cause muscle relaxation and reduce pain during post-workout recovery. It can also decrease anxiety and tension, resulting in better sport performance under pressure.”

Second is actual or potential risk, such as potentially negative effects on the cardiac and respiratory systems as well as mental health. Finally, WADA considers marijuana a violation of the spirit of sport, citing its illegality in many countries as well as the abuse potential which is contrary to the ethics or morals of a sport.

Ok, but should marijuana be banned?

If WADA’s concern is the reduction of pain during recovery and muscle relaxation, why is cannabidiol excluded from its banned substances list? Cannabidiol is the primary compound to exhibit anti-inflammatory effects, so this makes no sense.

The second answer is understandable, though, honestly, their citation of “paranoia and psychosis” comes straight from J Edgar Hoover’s playbook. Marijuana might exacerbate mental health issues, but evidence of its causing them is on shaky ground.

The moral argument is just strange. Alcohol, sugar, smartphones, and cigarettes are much more detrimental to the ethics of a society and, arguably, any sport that society produces, yet none appear on the banned substances list.

Just as the federal government scrambles for reasons to ban marijuana while states roll back regulations, WADA appears to be clinging to outdated stereotypes about the drug. The goal? To renew an ingrained bias against cannabis’s role in athletic competition. Alcohol is not allowed during competition, but athletes are free to drink (provided their coaches let them) during their stay. One can argue that it has stress-relief qualities as well.

This argument is important. While performance-enhancing drugs would deliver bragging rights to mere mortals who can but dream of competing in the Olympics, these substances do not belong in a realm where one-tenth of one second matters. If marijuana falls into this category, outlaw away.

But the specified inclusion of cannabidiol reveals a different story. The complex structure of cannabis and its effects on our bodies is still being understood. From what we know, this all seems like WADA is telling athletes to enjoy the anti-inflammatory benefits during recovery, just don’t get high, which is obviously a bit paternalistic.

It might take the committee a few more rounds before being honest with the evidence. Until then we can only hope more athletes won’t take the fall for taking a puff: of the 147 sanctions since 2008, 28 were for cannabis.