Forrest Fenn led an adventurous life. So when it came time to secure his legacy, he devised a modern-day treasure hunt the likes of which are usually reserved for mavericks, outlaws, and pirates. The 80-something year-old millionaire buried a treasure chest somewhere in the Rocky Mountains, most likely between Wyoming and Colorado, although it could be anywhere from Montana to New Mexico. It’s filled with gold, jewels, and impressive artifacts, estimated to be worth about two million dollars.

The mystery’s progenitor has provided a poem full of clues for anyone who has the brains, the heart, and the gumption to search for it. Thousands have tried and two have died, as clues—which look simple on the surface, quickly grow maddeningly difficult to decipher. Fenn, now 87, was a fighter pilot during the Vietnam War. Afterward, he became an amateur archeologist, self-taught, and set up a shop selling artifacts in Santa Fe, New Mexico.

“I love antiques, particularly American Indian,” he told NPR. One of his most prized possessions that once graced his collection was Sitting Bull’s peace pipe. He even once purchased an entire pueblo. In the ’90s Fenn fell into controversy over it. Other Southwestern archeologists, criticizing how he’d excavated the pueblo site, called him a plunderer. Fenn, a self-described treasure hunter, dismissed them, and the controversy died down.

After building a name and reputation, he began to sell artifacts to prominent politicians and movers and shakers in Hollywood. His list of clients included Gerald Ford, Jacqueline Kennedy, Cher, Steve Martin, and Steven Speilberg. He earned millions and had everything he ever wanted. But there are some things out of the reach of money. In 1988, tragedy struck when he was diagnosed with kidney cancer. Fenn planned to hall the treasure chest up into the mountains to have with him at his final resting place. Instead, he beat the cancer, then began contemplating his legacy.

He wrote his autobiography called, The Thrill of the Chase. It in, he extends to the reader an invitation to share his enjoyment of treasure hunting by proposing his own. In the book, he’s written a poem filled with clues that will lead to the 10-by-10-by-6 inch treasure chest. The ornate Romanesque box weighs about 40 lbs., and contains a gold frog 1,200-1,500 years-old, gold nuggets the size of hen’s eggs, diamonds, rubies, emeralds, pre-Columbian jewelry, an impressive jaguar’s claw, and a Ming jade carving, along with a copy of his book. 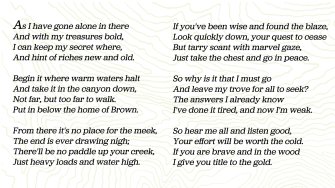 Interpretation is the problem. For instance, is “Where warm waters halt,” a hot spring or where two rivers converge? Other angles have been proposed as well. How about “home of Brown?” Is this a brown bear’s den? But brown is capitalized. Is it then, the home of someone named Brown? Other clues are even more confusing, like “no paddle up your creek,” or “If you’re wise and found the blaze…”

Blaze usually denotes a marker. But perhaps here, Fenn’s being metaphorical. He said in an interview with NPR that not enough people pay attention to the first clue. In other interviews, he’s said the first four clues have been cracked, and at least one person has been within a few hundred feet of the chest.

Fenn says some 65,000 people have gone looking for the treasure. Thousands still today pour over clues Fenn’s given in blog postings and interviews over the years. They also share tips and theories in their own blogs, and on Facebook and Reddit pages.

Fenn has said that the treasure is the Rocky Mountains and 5,000 ft. above sea level, but below 10,200 ft. It’s thought to be in a wooded area full of pine trees somewhere off the beaten path. It isn’t in a mine or any human structure. It may be in a natural one, like a cave. But that could be anywhere along the Rockies. He’s also said it’s in a place that he at his advanced age, can still get to. 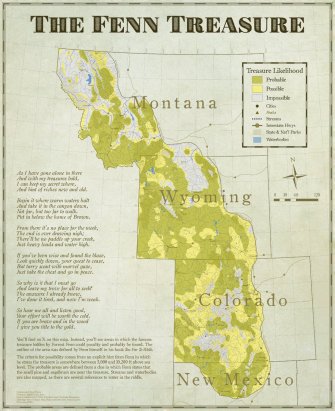 Two men actually died searching for the treasure. Pastor Paris Wallace, age 52, of Grand Junction, Colo. lost his life last year in search of the gold, while 54 year-old Randy Bilyeu, of Broomfield, Colo., died the year before. For the former, Fenn actually rented a helicopter and went out looking for the man. As a result of these tragedies, New Mexico State Police Chief Pete Kassetas asked Fenn to call off his treasure hunt, but Fenn refused. Instead, the eccentric millionaire says people should go in the warmer months, when it isn’t muddy or treacherous. Take the necessary precautions while outdoors, too. But even the most seasoned outdoorsman can find the Rockies hazardous, which is why one should always go with a buddy.

Fenn gets hundreds of emails a day asking for clues. He won’t give out any, so don’t ask. He’s also received threats and been offered bribes. And he’s had to call 9-1-1 three times, for intruders poking around his property. One man got arrested in front of the octogenarian’s house for harassment. Some even say, the whole thing is a hoax. But those who know him say the treasure is legit. “Somebody could find it this summer, or it could be a thousand years,” Fenn said.

For most of Fenn’s treasure hunters, it’s been a positive experience, something that’s got them giddy for adventure, a chance to unplug and be a part of treasure hunting history. It’s also helped many to witness beautiful scenery they may have otherwise missed. And that’s what Fenn wanted to do all along, inspire people to trek out into the wilderness and come to appreciate it. “I’ve had so much fun over the last 75 years,” he told People, “looking for arrowheads and fossils and strange things out in the forests and along the river banks, why not give others the opportunity to do the same thing?”

Another exiting week of commentary. Some real winners this week. Did you make the cut?