The Bible or the Koran: Which Holy Book Is More Violent?

Religion is part of the problem. But the bigger picture is much larger than any one book. 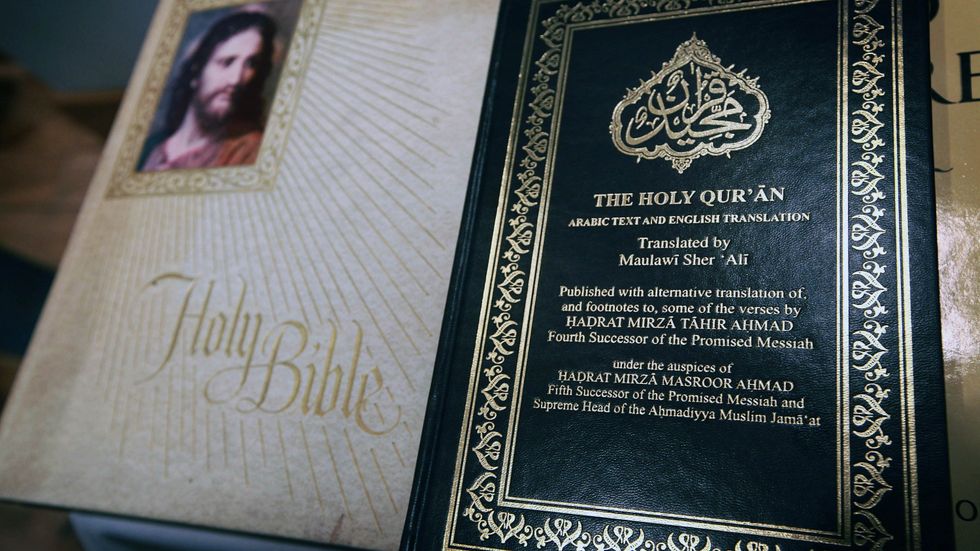 Much like one of my earlier columns — the Daily News’ cover on Facebook has labeled white mass murderers in America as terrorists. What followed was not uncommon; in fact, it's something I see on this site’s Facebook page all the time: an explosive tirade against Islam and the violence the religion perpetuates.

Most incredible is how many Islamic scholars have popped up over the past few years. This particular person cited over 100 instances of violence in the Quran, quoting one at length. Shortly after reading his comment, I came across this video posted by the Dutch comedic duo Dit Is Normaal.

They took the cover off of a Quran and wrapped it over the Bible, taking to the streets to read passages to random passersby. They then read aloud such passages as eating the flesh off your sons and daughters and cutting off a woman’s hand if she teaches, attributing them to Islam. The pedestrians recoiled in shock.

Interestingly, when the trick was revealed, the Dutch were rather self-reflective. One young man admitted that we all have prejudices, often unconscious. There was no anger or rebuttals; rather, they expressed shock and laughter. Overall you get the sense that the Dutch don’t take the Bible too seriously, even though, as Dit Is Normaal expressed at the beginning, the book has an important influence on their culture. I wonder how Americans would treat such an experiment.

The Bible is not short on violence. Consider the Book of Judges. The Benjaminites receive a religious functionary (Levite) from Ephraim. As the night progresses, the hosts demand that the Levite offer his concubine, then proceed to rape her to death. The Levite is not happy. He cuts the corpse into pieces, sending the body parts to the other tribes of Israel. Besides conducting wholesale slaughter, the tribes outcast the Benjaminites by refusing their daughters in wedlock. Eventually this is cleared up at a shrine in Shiloh, where the few remaining Benjaminites are allowed to rape the girls in attendance to ensure that their bloodline remains among the 12 tribes.

First the Benjaminites are cut off from spreading their seed; as punishment, their race is to be wiped clean from the planet. Somewhere along the line somebody realized that "11 tribes of Israel" just wasn’t as catchy a tagline, however. Rape again was freely offered, women being the real losers throughout the book.

It’s impossible to escape violence in any book from that era. Indian scriptures and Greek mythology are no different. We can imagine but not understand the regularity of violence in such a world, except perhaps if you live in a war-torn country today. Your outlook would be much different, which is the point: The predominant amount of violence in America is internal, be it through excessive gun violence or pharmaceutical addictions. We don't have the concerns of other nations.

Still, we turn to scripture when it suits us. Anti-gay and anti-abortion agendas rest on selective interpretation of biblical readings. Oddly that selection is minimal, for what about men that have sex with menstruating women in Leviticus? To do so means that the woman’s "menstrual impurity" is magically transferred to him for a week. And forget about having a nocturnal emission: That unconscious error gets you kicked out of camp until you can clean yourself up.

Violence against gays, women, and Muslims are seeing an increase in America. Physical violence is still comparatively minimal, but that’s only because we’re not considering the mental and emotional violence, sometimes achieved through legislation, displayed on a daily basis.

Even within this country there is a divide. Biblical readings taking place in Houston and Orange County mega-churches, in which the book is used solely for teachings on prosperity, are vastly different readings than small-town preachers spitting hell fire while claiming that earthquakes are the result of marriage equality. This is the same book; interpretations are wildly different. In a contradictory book such as the Bible, just like the Quran, you will find messages of peace and charity as quickly as violence and rampage. There’s something deeper than religion going on.

And yet, there has always been something deeper. Sociology is a more appropriate field — I suggested that religion should be studied as a social science months ago. There are many moderate and peaceful Muslims falling under scrutiny simply for their faith. We don’t assume Jews are going to rape our daughters because their holy book states it necessary, yet somehow we’ve created a mental image that each Muslim is waiting to be radicalized.

Obviously this is not the case, and I assume — hope — most adults have the wherewithal to understand that. Yet each time one flips through a Quran (or more likely finds a quote posted on their friend’s page) to display the violence sanctioned in that book, recall our own theological foundations. America stands on equally shaky ground. Forget the texts and investigate our history and terrorism makes constant appearances.

We have risen above most of the noise through pluralism and empathy. While I’ve always treated the concept of Manifest Destiny cautiously, I also recognize that we are fortunate to not have to worry about terrorist organizations overtaking our government or bombs descending from above. That would quickly change our outlook on life much more so than millennia-old texts. We perpetuate the myth by assigning all modern ills to these books. Religion is part of the problem, but never has it been the totality of it.