In the past six years, Hungary has gone from democracy to extreme conservatism. Can this happen elsewhere? 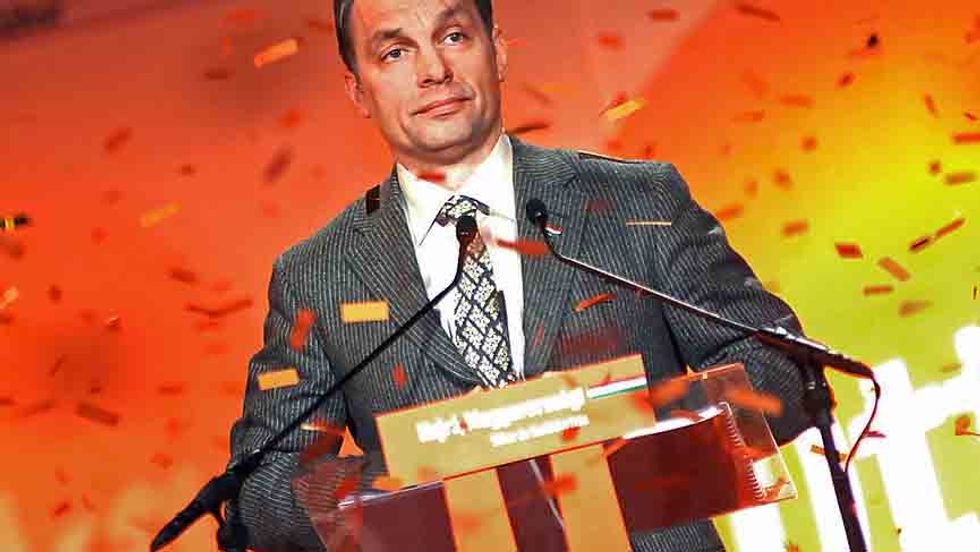 Recognizing history as it happens is challenging. Certain moments, usually involving trauma, are easily identifiable. Walking through the streets of Manhattan on 9/11, I knew the day would be unforgettable to future generations. The recent Orlando shooting will be remembered as strongly as Sandy Hook in three years' time.

We’ve evolved to commit traumatic events to memory, as a society if not always as individuals. Slower turnings of history are harder to parse. As we generally regard humanity to be evolving in a better direction—Obama constantly reminds us that America’s best days are ahead, not unusual for most leaders—moving backwards contradicts our ethos. Yet that’s exactly what’s been going down in Hungary.

The subtitle of Paul Lendvai’s exhaustive work, The Hungarians, explains a lot: A Thousand Years of Victory in Defeat. Situated as it is in the middle of Europe, the country has long been politically ping-ponged by neighboring superpowers. The culture, the soul of the Magyar, is poetically expressed by historian John Lukacs:

The instruments of their internal music were not springtime violins, or the summery bravura of the gypsy bands whose music in the summer mixed with the crunch of the gravel and with the clanging of the dishes in the open-air taverns and restaurants. The deepest, truest sound of Magyar prose is not that of a canting and chanting violin; it is that of a cello.

For further insight, consider that the national anthem, ‘Himnusz,’ includes the phrase, ‘Pity, O God, the Hungarians / Who are tossed by waves of danger / Extend over it your guarding arm / On the sea of its misery / Long torn by ill fate / Bring upon it a time of relief.’

Most associate Hungary with its deportment of massive numbers of Jews to extermination camps, if they associate Hungary with anything. (I’ve spent a lifetime explaining the pronunciation of my last name.) A revolution in 1956 put Hungary on the atlas following the loss of land and citizens post-World Wars. In 1989 it opened borders with Austria, leading the way for the implementation of a democratic parliamentary republic.

While democracy is, at its best, associated with stability, turbulent is a better word to describe Hungary’s recent predicament. Seesawing between socialism and conservatism for two decades, the right won out in the form of the Fidesz party in 2010. More disturbing, perhaps, is the anti-Semitic, anti-Roma sentiments of the far-right Jobbik party, which won nearly a fifth of the electorate that year, including a quarter of voters age eighteen to twenty-nine.

Life under Fidesz rule has not been pleasant for the democratically minded. As Susan Faludi reports in the Baffler,

[The Fidesz party] rewrote the constitution, expanding the powers of the state, curtailing civil liberties, defining life as beginning at conception, forbidding same-sex marriage, and declaring Hungary a “Christian” nation.

Fidesz retained power in 2014, winning 117 of 199 available seats, while Jobbik gained ground. Prime Minister Viktor Orbán, who first served from 1998-2002 and was again appointed to the role in 2010, has inched his party, and nation, further right by the year. He’s a fan of borders: his 110-mile long, thirteen-foot high fence with Serbia was built to keep out Syrian refugees. (He later constructed one on the Croatian border.)

Orbán has limited the powers of the press, tried to centralize banking power, and lashed out at other national leaders. Anti-gay slurs and violence have seen an uptick, as has attacks on Roma. (The term ‘gypsy’ is derogatory, though it has gained currency as a fanciful notion of a traveler, predominantly fueled by trust fund kids and West coast yoga instructors using the term in their Instagram handles.)

This all fits well into Orbán’s personal and cultural narrative, which is anti-European Union and pro-national conservatism. Just as the American dream remains embedded in our widespread imagination, Hungarian independence is a longtime clarion call. Politicians calling for it want freedom for themselves, though, not the populace—Orbán, for one, promised to “make Hungary great in the next four years.” So far it has been great for him.

As Paul Ratner reported on this site, there are five qualities of fascism: it thrives in militaristic societies; political leaders reject liberal democracy and prefer totalitarian one-party rule; it is not actually left- or right-wing; citizens willingly give up certain liberties in fear of safety.

It would seem hopeful that Fidesz dropped ten percentage points in popularity a year after the 2014 elections. Problem is, those points were transferred to Jobbik. Its declared future candidate, Krisztina Morvai, once said this regarding a spate of Israeli deaths:

I wish all of you lice-infested, dirty murderers will receive Hamas’ ‘kisses.’

I visited Budapest in 2010. It was the first time a member of my family had returned since my grandfather emigrated to New Jersey a century prior. It reminded me of a run-down Paris: beautiful architecture and stunning public spaces haunted by the ghosts of chronic warring. Just like in Paris, where the weight of history unfolds when traversing the catacombs, you feel an unspoken drive toward something greater in front of your eyes.

Then a party comes along and promises that something greater, some ‘relief.’ You believe it because the party in power hasn’t provided the ascension you believe to be your birthright. Piece by piece your freedoms are brokered out of the deal, your eyes focused on impending outside forces breathing down your neck. Only your leaders can protect you against the other. Then a moment comes in which you realize you too are the other.

Can fascism happen anywhere? If history, and the present, is any guide: absolutely.