As politics descends into dark comedy, comedians are getting serious about politics. It’s a worldwide trend: In America, late-night tv hosts are some of Trump’s fiercest critics. The Five-Star Movement founded by comedian Beppe Grillo is now a party in Italy’s new coalition government. And in Hungary, the Two-Tailed Dog Party uses graffiti, stencils, billboards and other forms of street art in a guerrilla war of sorts against the ‘illiberal democracy’ espoused by the right-wing government of Prime Minister Viktor Orban.

Founded in 2006, the Magyar Kétfarkú Kutya Párt (MKKP) is more than just a ‘joke party’. It uses absurd inversions of the government’s own slogans to combat the narrow nationalism – anti-immigration, anti-EU and generally anti-internationalist – currently holding sway in Hungary.

Other MKKP plans included building a great mountain to provide some relief (literally) on the otherwise very flat Hungarian Plain, and the promise, symbolised by this poster, to ‘Make Hungary Smaller Again’.

The Trianon Treaty of 1920 is still a sore point in Hungary: in dismembering Austro-Hungary, it reduced the Hungarian component of the Empire to 28% of its former size, and to one-third of its former population, stranding millions of ethnic Hungarians outside post-World War I Hungary.

Listing a number of arguments for its proposal, the poster proclaims: Let’s deattach unnecessary regions along the border! All of Hungary’s immediate neighbours get a piece: Austria (A), Slovakia (SK), Ukraine (UA), Romania (RO), Serbia (SRB), Croatia (HR) and Slovenia (SLO). 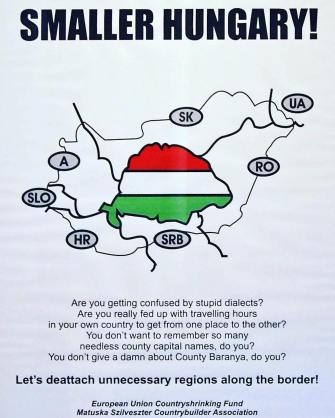 In 2009, the MKKP graduated from street art to street protest, gathering around 300 protesters to chant: “What do we want! Nothing! When do we want it? Never!”

In 2010, the MKKP attempted to field candidates in the race for mayor of Budapest, using slogans that parodied actual populist ones. The MKKP promised “Eternal life, free beer, tax-deduction!” and “More everything, less nothing!” Another poster slogan read: “We promise anything!”

As if to underscore that last point, the MKKP said it wanted to open up an interplanetary spaceport at Szeged, create a new animal species out of bits of extinct ones, and open up a Hungarian restaurant on Mars – to improve the country’s tarnished image across the solar system.

The MKKP has had difficulty obtaining the required registration to participate in elections, one judge finding the party too ‘flippant’ for official recognition. On September 8, 2014, the party managed to register for the local elections later that year just 16 minutes before the deadline – leaving it no time to nominate any candidates.

In the summer of 2015, at the height of Europe’s migrant crisis, the right-wing government of Viktor Orban launched an anti-immigration campaign with billboards proclaiming: “If you come to Hungary, you can’t take Hungarians’ jobs away!”

In response, the MKKP and others launched an ‘anti-anti-immigration campaign’, setting up more than 800 billboards with ironic slogans, in both Hungarian and English. Their messages: “Sorry about our Prime Minister”, and “Feel free to come to Hungary, we already work in England anyway!”

Absurd humour may be one of the last weapons of the liberal, internationalist elements in the Hungarian political spectrum. The MKKP is one of its focal points. The ‘anti-anti-immigration’ billboard campaign was funded by public collection: at 33 million forint (about $120,000), it received 10 times more than originally projected.

However, the absurdist strain is not a mass movement, at least not yet: a February 2016 poll indicated the MKKP commands just 1% support among the Hungarian general population. Still, the Two-Tailed Dog Party persists. In the run-up to the October 2016 referendum on migrant quota, the MKKP mocked the government’s anti-immigration platform, putting up posters with slogans such as:

To protest against the referendum, the MKKP asked voters to spoil their ballot; they even released an app that voters could use to snap and publish their invalidated ballots – for which the party received a $3,000 fine. Eventually, 6% of the results were deemed invalid.

At the parliamentary elections in 2018, the party got 1.73% of the votes, still not enough to obtain a seat in the Hungarian parliament.

This Simple Thought Experiment Shows Why We Need Quantum Gravity

Quantum gravity tries to combine Einstein’s general theory of relativity with quantum mechanics. Quantum corrections to classical gravity are visualized as loop diagrams, as the one shown here in white. […]