5 Qualities of Fascism: Is the US Anywhere Close?

There is one specific condition for fascism to take hold in the United States. 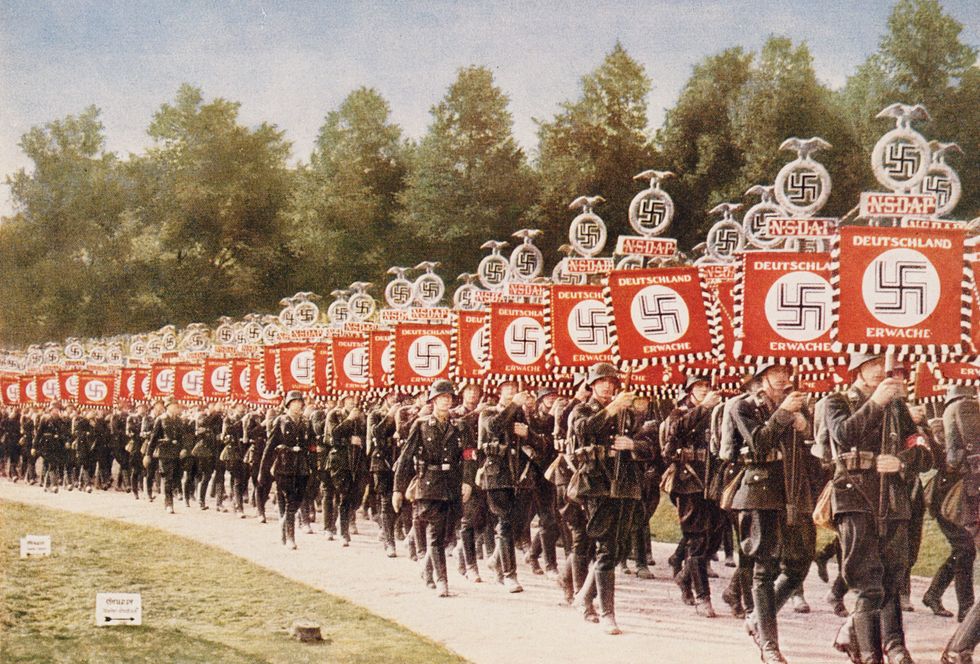 The word "fascism" is a favorite insult for many, especially in light of the current political climate. If you aren’t already calling them Hitler, tying whoever you oppose to fascism is a great hyperbolic second. Most of the time, however, the word is not used correctly, ignoring historical precedent and the specific conditions that need to exist for a country to go fascist.

Fascists originally hail from Italy, where Mussolini founded the National Fascist Party in 1919-1921, on the heels of World War I. In fact, the word “fascism” comes from "fasces" or "fascio littorio" - a bunch of rods tied around an axe, an ancient Roman symbol of the magistrate's authority, which could be used for corporal and capital punishment.

What needs to happen in a country for it to become fascist?

1. Fascism thrives in militaristic societies. World War I caused a tremendous militarization of a number of countries. Nations like Italy and Germany saw the need to be able to quickly mobilize millions of people to fight wars and provide economic support.

2. Fascists reject liberal democracy, which is basically a representative kind of government where elections are free and competitive, powers between different government branches are separated, and people have more or less equal rights, freedoms and protections under the law.

3. Fascists, on the other hand, prefer totalitarian one-party rule, led by a strong leader (your favorite dictator). This allows the fascist country to have unparalleled national unity of purpose, a very ordered society, generally ready for armed conflict. Such a society is also poised to respond quickly to economic measures, especially in time of difficulties. A fascist country will likely isolate itself, blaming the international economic order for its troubles.

4. What is important to note is that many scholars do not regard fascism to be a solely right-wing or left-wing affliction. It may have elements of both sides of the spectrum. Mussolini himself described fascism as a movement that would strike "against the backwardness of the right and the destructiveness of the left".

According to the British historian Roger Griffin, fascist societies of the 20th century also exhibited such components as "a rebirth myth, populist ultra-nationalism and the myth of decadence." Essentially, fascism promises that radical, nationalist politics will pull a nation out of decadence into a period of renewal.

Coming on the heels of the military and economic humiliation suffered by Germany in World War I, followed by the hedonism of the Weimar Republic, one can imagine the appeal held by the narrative that Germans were actually a nation of superior Aryan people, with supposed ancient roots. All they needed to do was to weed out the members of society that caused their country to rot from the inside, and they were sure to assume their rightful place as the leaders of the world.

German Nazi activist Horst Wessel (1907 - 1930, left) at the head of a parade of S.A. stormtroopers, or 'brownshirts', in Nuremberg, Germany, 1929. This photo is from a series of collectable images published in Germany during the Nazi period, entitled 'Deutschland Erwacht' (Germany Awakes). (Photo by Hulton Archive/Getty Images)

Can fascism come back to Europe in this day and age? Certainly, there are a number of European ultra-nationalist parties that made significant political gains, often sporting racist, anti-semitic, anti-immigrant, and isolationist agendas. These include the National Front in France, Jobbik Party in Hungary, Golden Dawn in Greece, and the Freedom Party in Austria, whose candidate Norbert Hofer is in position to become the country’s President in the current elections.

Here’s a chart that shows the rise of ultra-nationalist politics across Europe:

The rise of such parties can be seen as a response to the threats posed by Islamic terrorism and as an extension of economic issues facing European society, with growing inequalities between members of the shaky European Union. It is unlikely, however, that the changes European ultra-nationalists might effect in their countries would result in authoritarian one-party states. An anti-immigration stance is not in itself fascism.

What about the United States? What would it take for the great bastion of democracy to turn to the dark side? Some feel anxiety listening to the promise to make America great again, which clearly states a need for rebirth so America could attain its lost mythological status. Others are getting ready for a tyrannical government, which would take away their guns and money and abolish their religion. While both parties often invoke fascism in partisan name-calling, the strong position of the state within fascism would go against the grain of the American Republican party, while the social restrictions would be anathema to the Democrats. Fascism is likely the ultimate "outsider" dogma.

Can an outsider channel the anger felt by millions at the supposed failings of the “establishment” and proclaim himself or herself the one authority on all national decisions? It’s hard to fathom the possibility of checks and balances built into the American government to be so easily circumventable. But there is one way that fascism can take hold in the U.S.

5. The ultimate circumstance when people are willing to give up on their ideals is being in a state of great fear for their safety.

This fear has not yet reached its peak and hopefully never will. Scenarios under which some form of fascism could infect the US would include a cataclysmic world war or perhaps more likely - a much more serious terrorist event, like an attack with a nuclear weapon. This could be followed by a severe economic downturn like the Great Depression, and then people might be willing to give up their rights to a strongman.

Thankfully, these conditions are not present in our current world, and we have to hope and work hard so that our institutions can withstand even the gravest threats. Right now, it seems impossible that the kind of militarization, total control of mass media, and social homogeneity fascism requires would ever come to exist in the United States. Still, never say never. History often moves quicker than we can grasp.