The Case Against Empathy

It’s hard to imagine empathy being anything but beneficial. It has become one of the most championed mental states in the neuroscience age: the ability to feel what someone else is feeling and, if all goes well, extend a hand altruistically or compassionately. 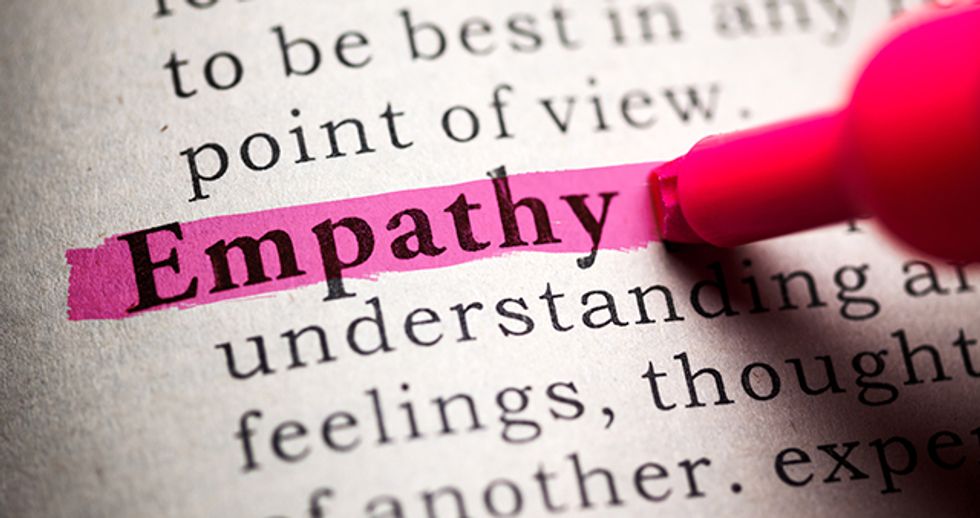 It’s hard to imagine empathy being anything but beneficial. It has become one of the most championed mental states in the neuroscience age: the ability to feel what someone else is feeling and, if all goes well, extend a hand altruistically or compassionately.

This is the clean-cut version of empathy. I feel what you’re feeling; I get it. Thinkers call for empathy when facing international crises, such as continual turmoil in Gaza: if Israelis could just feel what it’s like to be a Palestinian mother, if the Hamas leader could just understand what a sympathetic Jewish father goes through, none of this would be happening.

Yale University professor of psychology and cognitive science Paul Bloom thinks a lot gray resides in such a black-and-white definition, and that there is more danger than good adopting such a simplistic view of empathy. He argues exactly this point in the latest issue of Boston Review.

At the heart of his article lies an important distinction between emotional versus cognitive empathy. Briefly, the former is literally feeling what another is experiencing, while the latter implies sympathizing with the other—understanding what’s going on without necessarily going through the same emotional whirlwind.

The exact term is empathetic distress. Bloom cites a study conducted by neuroscientist Tania Singer and Buddhist monk Matthieu Ricard, himself a former scientist before leaving that world in the seventies to devote his life to meditation. Ricard was asked to focus first on compassion while having his brain scanned by an fMRI machine. During that time, brain regions associated with empathy were not activated.

During the next meditation he focused on empathy. While the proper neural regions lit up, Ricard felt drained after just a few minutes. As he said at the time,

The empathic sharing very quickly became intolerable to me and I felt emotionally exhausted, very similar to being burned out.

Interestingly, Boston Review invited fourteen thinkers to contribute twelve essays debating Bloom on his ideas. While a few were sympathetic, most were not. Unsurprisingly, each focused on their personal area of expertise: Brown University PhD student Elizabeth Stoker Bruenig invoked Christian mysticism; Psychiatry professor Chrsitine Montross focused on medicine; author Simon Baron-Cohen honed in on the Gaza conflict, as did neuroscientist Sam Harris, who was very much aligned with Bloom, though with a completely different take on Israel than Baron-Cohen. Bloom then replied with a closing essay.

Without diving too deeply into the particulars, the main thrust against Bloom was done by heralding the value of empathy, mostly by pointing out that our emotions influence all of our cognitive endeavors, including the more rational-minded empathy Bloom ultimately values. Yet I don’t believe this is exactly what he was talking about.

Firstly, it’s important to note that emotions are feelings. These body states—various rises and drops in hormones and chemicals moving us away from homeostasis—are eventually turned into thoughts through the cognitive process. We then associate the feeling with the person or event that caused it to arise. Being able to separate the feeling of an emotion from the cause of it is a big part of the form of meditation that Ricard and others practice—the mindfulness tradition of Tibetan Buddhism.

Just as each of the writers responded from the viewpoint of their own discipline, I find myself naturally turning to yoga when contemplating empathy. In this, I find Bloom completely correct in his distinction.

Empathy is a popular word in yoga classes. Yet I’ve found that such empathizing—feeling the pain and suffering of others—is more often than not a selfish act. It lets the listener turn the attention to their personal suffering. Instead of acting as a conduit for their friend to siphon their emotions through, it quickly becomes about the corresponding distress in the listener. Everyone dumps, no one cleans up the mess.

Cognitive empathy, by contrast, is much more valuable. On occasion I have a student going through chemotherapy. Having gone through cancer earlier this year, I can listen to their challenges and understand both rationally and emotionally what they are experiencing. This does not mean I have to then go into the specifics of my disease. I can merely state, ‘Yes, I’ve been there, and here are some ways you can adjust.’

Even if I had never gone through chemotherapy, I can still imagine their pain. It might not be the same—there would be no connection in regards to the physical feeling of chemo—but understanding that the person is having a rough time and moving forward from that space is an essential component of expressing empathy.

At the end of his initial essay, Bloom compares empathy to anger, something a few commentators voiced frustration over. Yet again, I think he was spot on. Recent research has shown that expressing anger lowers levels of cortisol in one’s blood. Focused anger has long been a catalyst for positive change, especially if you consider protest music through the ages. Embodied rage lies at the heart of civil and women’s rights and numerous other injustices that have plagued humanity.

Anger itself is not a negative emotion. Neuroscientists investigate all emotions by their motivational direction; any of them can be harmful or helpful depending on context. Empathy should be treated no differently. If it is to turn into those ‘higher’ states of expressing consciousness, such as altruism and compassion, there must be both a degree of detachment from what the other is feeling, as well as an understanding that whatever is going on is not about you. Adding distress to distress does not help anyone.