7 Myths about Native Americans That Need to Be Corrected

In 'All the Real Indians Died Off,' two scholars take longstanding myths about Native Americans to task. 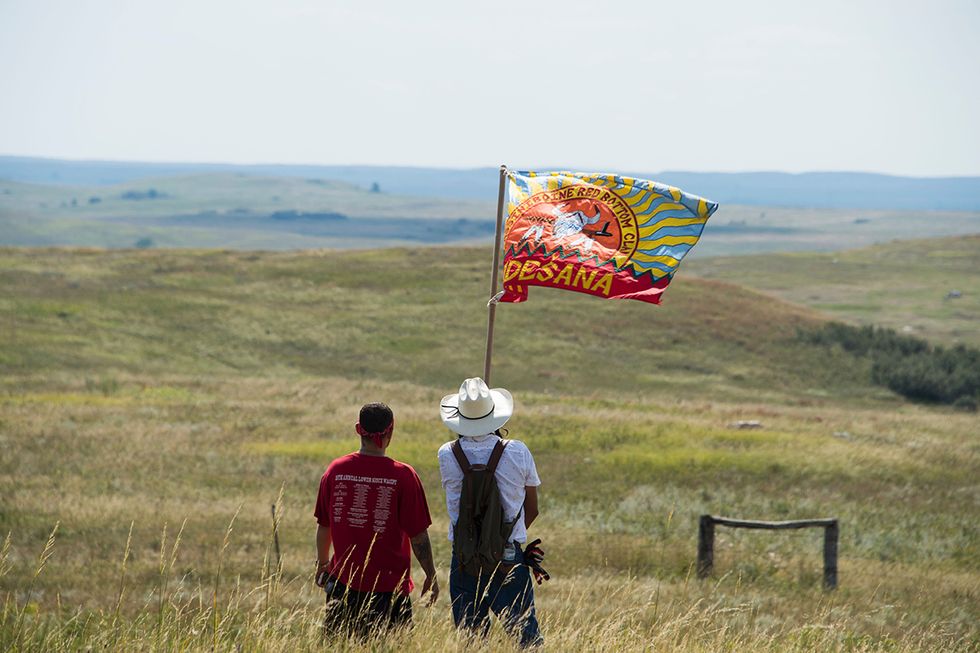 While not as high profile as the Keystone XL pipeline, the Texas-based Energy Transfer Partners have been trying to construct a nearly twelve-hundred-mile conduit through North Dakota. As with countless previous construction/relocation projects across America, this pipeline borders reservation land.

The struggle for land ownership is nothing new. Yet this particular blending of numerous tribal groups, environmental organizations, and celebrities waging war against the oil industry is the latest in joint efforts raising awareness about potential catastrophes—and climate change. As Roxanne Dunbar-Ortiz and Dina Gilio-Whitaker write in their new book, “All the Real Indians Died Off” and 20 Other Myths About Native Americans:

In the twenty-first century, Native American political struggles have merged with a global Indigenous rights movement that itself is inextricably bound to the global environmental and climate justice movements.

The authors conclude the book with this sentiment, pointing toward a long-awaited broad recognition of the struggles Native Americans have faced over the last half-millennium. Yet the dawning is slow as misconceptions and sheer ignorance abound. One recent and glaring example is Donald Trump’s mocking of Elizabeth Warren by calling her Pocahontas. (The book does not include Trump’s taunts, though it does tellingly point out that the Pocahontas stereotype is effectively a celebration of child pornography.)

We still have a long way to go to make amends with the most oppressed groups—there are currently 567 federally recognized Native nations totaling 5.2 million citizens—in American history. This insightful book investigates past and continuing struggles. The concepts of American exceptionalism and manifest destiny have wreaked havoc on any culture obstructing a specific, tailored view of this nation. Before actual healing can occur, education must come first. This book is mandatory reading for every citizen, especially those calling themselves patriots.

The following synopses of seven myths merely scratch the surface of this excellent work. As the authors conclude, “colonization dehumanizes both the colonized and the colonizer”—another sentiment perfect for our current election cycle. The polarizing pace of modern politics needs an antidote quickly. That begins with understanding how we got here.

Columbus discovered America. While painfully obvious, the timing of publication—Columbus Day, or as is now known in multiple cities, Indigenous Peoples’ History Day—reminds us of a lesser known tidbit: Columbus enslaved more than five thousand Indigenous peoples, making him the single-most subjugating individual in our nation’s history. What’s worse, he never set foot on what is now North America.

Thanksgiving proves the Indians welcomed the pilgrims. Mayflower riders were not the first to land on the continental US, nor the friendliest. In the four years leading up to the feast somewhere between one-third to 90 percent of the Indigenous population had been killed by an unknown epidemic, making the Plymouth land grab that much easier. The Pilgrims knew this as their forks speared the goods.

The only real Indians are full-bloods, and they are dying off. A perpetual dilemma has plagued Native communities: admitting Indian-ness invites discrimination, yet proving genealogical webs can be impossible. DNA testing has made this process slightly more exacting, but as the authors write,

American Indians are the only citizens who are subject to state-sanctioned legal definitions of identity, obligated to prove who they are as Indigenous peoples.

Sports mascots honor Native Americans. Dan Snyder publicly announced he’ll never change the name of the Washington Redskins, though a number of other teams promote racist imagery and faux war chants at games. Certain tribes have granted permission to teams using their likenesses: Florida State University’s Seminoles, Central Michigan University’s Chippewas, and the University of Utah’s Utes. Yet most have not, granting this bit of cultural appropriation continued social and economic power.

Native American culture belongs to all Americans. I witness this all the time in Los Angeles with the influx of yoga-inspired ‘shamans’ leading all sorts of ritual ceremonies. Cries of foul play are met with First Amendment rights, which pulls from the founding document that Indigenous people had no say in. Likewise headdress-rocking Burners and Coachella glampers. The authors have witnessed this often:

Indian casinos make them all rich. A fascinating suspension of logic: “Native people can simultaneously be represented collectively all on government welfare and rich because of casinos.” Both are false. As goes everything in a capitalistic society, very big winners mingle with a majority skimming by. There are 459 gaming establishments in America on Indian land. Of the $28 billion generated in 2014, ninety-six brought in between $10-$25 million. Eighty-eight saw less than $3 million enter the coffers. Only twenty-six topped $250 million that year.

Indians are naturally predisposed to alcoholism. This is certainly problematic. The authors note the false assumption of predisposition is based on a colonizing mentality: these backwards people need to be assimilated. Numerous variables play a part in substance abuse. Are white people naturally predisposed to opioid abuse? Or do we need to investigate the conditions—poor working conditions, terrible nutritional choices, bad postural habits, the economic downturn, prescription-happy doctors—in writing the story of today’s disastrous epidemic?

You know the answer. To better understand the discrimination, nuance, and strong-arming resting at the foundation of America, as well as comprehending how this centuries-old system perpetuates itself today, Dunbar-Ortiz and Gilio-Whitaker have fourteen more myths to tell. Listen, for it is who we are.