No, that’s not a typo. It’s “bison” on purpose. (Paleontologists have a sense of humor, too.) And the elusive creature is the answer to a puzzle that’s had geneticists puzzled.

What’s had them wondering is something they’ve found during genetic studies of steppe bison bones and teeth that just doesn’t fit. There’s been a section of late ice age bison genomes that doesn’t really belong to anything else. They’ve suspected it may belong to a heretofore unidentified species, but, absent other evidence, they weren’t sure. They temporarily named the mystery animals “CladeX.”

They may have had the evidence they sought all along, in the ancient artwork found on the walls of France’s Lascaux and Pergouset caves back in 1940. Scientists analyzing the cave paintings have noted an odd shift in the features of bison depicted in the Pergouset cave. At first — from 20,000-18,000 years ago — bison appear they way steppe bison are expected to: with long horns and prominent forequarters. But by about 13,000 years back, they look noticeably different: The painted bison have more symmetrical proportions, and their horns are thinner and shorter.

Could this be the mystery species?

Intrigued, geneticists examined the mitochondrial and nuclear DNA in bison bones and teeth from 20,000 to 12,000 years ago. These samples were gathered from 20 sites across Europe and into the Urals and the Caucasus.

It turns out that a separate species — the elusive Higgs bison — did roam the steppes from 17,000 to 13,000 years ago. This time frame matches up startlingly well with the Pergouset bison paintings. 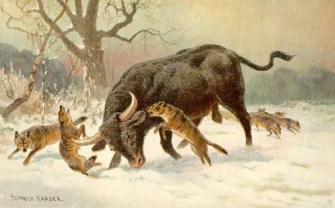 Related
Neuropsych
Memory and the benefits of forgetting
Forgetfulness isn’t always a “glitch” in our memories; it can be a tool to help us make sense of the present and plan for the future.
The Learning Curve
5 Stoic quotes to help you through difficult times
“We suffer more often in the imagination than in reality.”
Starts With A Bang
The good reasons scientists are so hostile to new ideas
Many people out there, including scientists, claim to have discovered a series of game-changing revolutions. Here’s why we don’t buy it.
The Present
Climate change is altering the chemistry of wine
Smoke taint from wildfires is gross, even to wine amateurs.
13.8
Could a hidden variable explain the weirdness of quantum physics?
We have searched and searched but have never found one.
Up Next
Surprising Science
Gene Therapy Technique Vaccinates Against and Cures Early-Stage Alzheimer’s
This offers hope in the face of a disease which currently has no treatment option to halt its progression.