How Your Emotions Affect Sickness and Depression

In How Emotions Are Made psychology professor Lisa Fedlman Barrett considers the role of emotions in health. 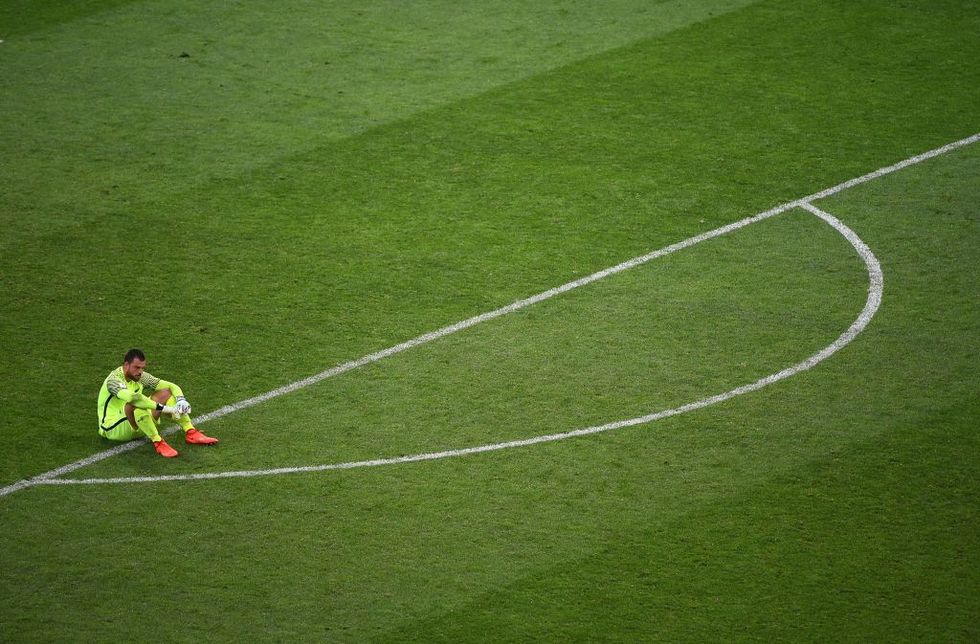 New Zealand's goalkeeper Stefan Marinovic sits on the pitch during the 2017 Confederations Cup group A football match between Mexico and New Zealand at the Fisht Stadium in Sochi on June 21, 2017. (Photo: Patrik Stollarz/AFP/Getty Images)

At the gym I’ve watched members enter class or the steam room to “work through” a cold. Hoping to feel better, their spread of germs is likely to infect others. Gyms are, like schools, breeding grounds for illness. But is the spreading of germs enough to make another sick?

Sometimes. Amazingly the germs themselves prove secondary to the mindset of the potential victim. One study found that when a group of people received a cold virus directly into their nose only 25-40 percent of the infected became sick. There’s more to illness than germs.

Of all the psychosomatic factors psychology professor Lisa Feldman Barrett discusses in her groundbreaking book, How Emotions Are Made: The Secret Life of the Brain, these lines in particular jumped out:

The diverse set of symptoms that you collectively call “a cold” involves not just your body but also your mind. For example, if you are an introverted or a negative-minded person, you’re more likely to develop a cold from a noseful of germs.

When I talked to Barrett about this phenomenon, she told me her point was not to focus on pessimism. She was just reminding readers that multiple factors go into generating sickness. The larger picture begins with concepts.

We learn about everything through concepts. Barrett uses bees as an example. In order to mentally envision a bee you first have to have a concept of what it is, not only what one looks like, but also information relating to bees, which require other concepts: meadow, honey, and sting, for example. The more you learn about and have experiences with bees, the broader your concept. You then group bees with other larger concepts, such as insects and flowers.

This is how humans learn. Concepts help us “guess the meaning of incoming sensory inputs.” When you first experience a small buzzy thing flying around your head you don’t know what it is. Maybe someone informs you; maybe it stings your arm. You quickly learn to avoid it. In the future you know to move away when you see it coming. We apply concepts and grouping to everything. If we didn’t we’d have to relearn the same concept over and over and over.

Barrett’s thesis takes off from this basic knowledge when she writes,

With concepts, your brain simulates so invisibly and automatically that vision, hearing, and your other senses seem like reflexes rather than constructions.

While common wisdom claims humans share basic, universal emotions, Barrett realized that theory, based on very specific emotions applicable to the facial expression of Westerners, is not how humans generate emotions. There is no “fear face.” We don’t so much react to stimulation—the old knowledge of emotions—as predict incoming sensory information and construct, on the spot, our emotions relating to it. This might sound minor, but the implications are anything but.

If humans are reactive animals always responding to stimulation—this causes fear, that creates angry, this implies sadness—then we’d share a basic set of universal emotions. But we know that’s not how humans work. People respond to seeing a dead body differently: disgust, sadness, anger, but also joy and even arousal. It’s not a reaction but a creation dependent upon numerous factors, including past experiences to that stimulation, genes, and your current audience.

Problems begin because we're often essentialists, which is the belief that essence is prior to existence. An emotion is innate and therefore we react with it at these times; a virus germ is the essence of a cold, and so when coming into contact we become sick. But if the majority of people infected with a virus does not become sick, Barrett asks, what other factors need to be considered?

Barrett says most genetic material is not comprised of genes but the machinery turning genes on and off dependent upon the situation—genomics, or epigenetics. Certain people are more sensitive to input than others. When dealing with germs, your stress level makes a huge difference. If you’re interacting with your environment in a stressful or pessimistic manner, you’re more likely to get sick.

When your body budget is taxed—continually taxed—to the point where your brain believes your body is sick, that it needs to be protected from a major illness, the genes that protect you from bacteria tend to be turned on and the genes that protect you from viruses tend to be turned off. If your body is under siege, if you’re stressed, your brain is running your body at a deficit—this is colloquially what we call stress—long term stress comprises your immune system in a particular way that means you’re more likely to catch a virus.

The ravages of stress aren’t only applicable to viruses. Barrett points out 1.5 billion people suffer from chronic pain. Chronic pain is so pervasive in America we spend or lose in productivity $635 billion every single year. Barrett extends this to include depression, which she believes might be “a disorder of misbudgeting and prediction.”

We know there’s no silver bullet for chronic pain and depression, but it is similar to a virus: there is no singular cause. What we do know is that stress plays a role. Barrett writes that we can’t treat one part of the body without taking every system into account. Stress, though, has system-wide effects.

Everything about us—our central nervous system, enteric nervous system, the environment, friends, family—plays a role in our health. While the concepts we use to frame the world might not be the only factor in determining health, it often begins there. And if we’re overwhelmed every time we contemplate the input around us, our immune system will be compromised. A vicious cycle ensues.

The reality is there is no reality. At least no singular reality ruling over all other realities. We are constantly constructing reality every moment of our lives. Your experiences, Barrett concludes are not “windows into reality.” Your brain instead models your world dependent upon what is happening in your body and environment this very moment. Your world, she says, is “formed in a storm of prediction and correction.”

And that matters for health, be it the common cold or, strung out over a period of decades, mental health. It matters in relationships and careers. It matters in politics and the law. In each instance we often want to be right, but demanding the world bend to your perception of it always leads to suffering, as the Buddha knew all those millennia ago. You're guaranteed disappointment. A chronic system-wide spiral begins.

Predicting correctly is an art, not a reaction. As with everything it takes time and patience, as well as, at times, moving out of the way of yourself. Not the easiest task, but when your health and the health of your society matters, it’s well worth the sacrifice.