Ghosts Are Universal, But What You See is Influenced By What You Already Believe

Psychology professor Frank T. McAndrew writes that the type of ghost you see depends on the religion you have faith in. 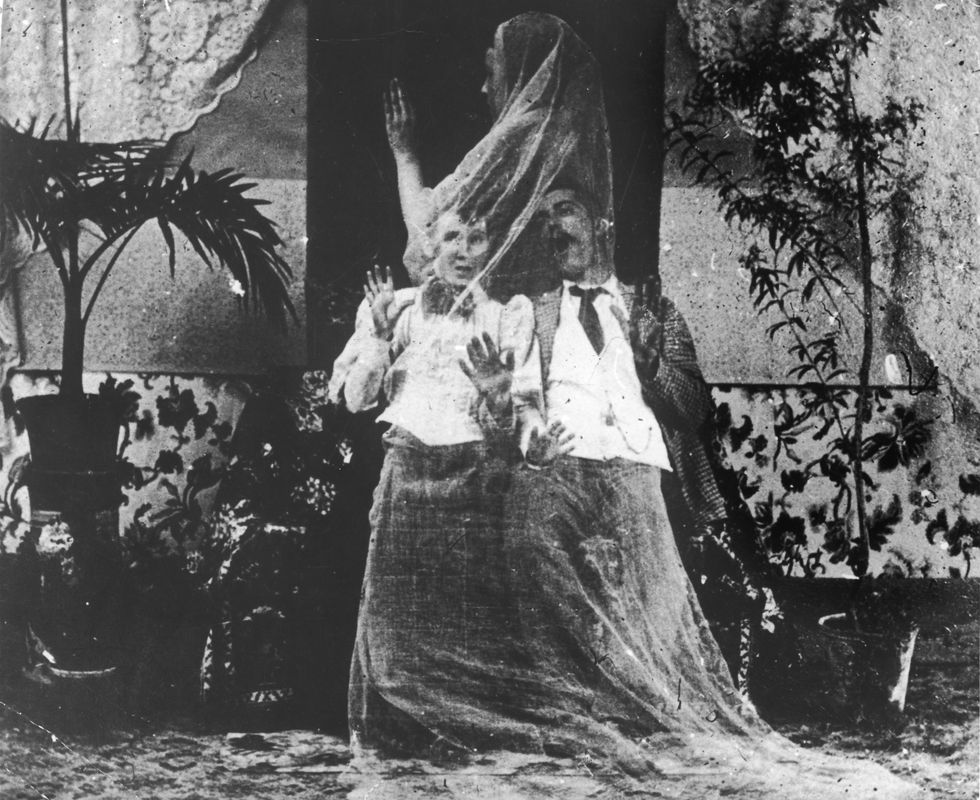 A couple are terrified by a spectral apparition, circa 1880. (Photo by Hulton Archive/Getty Images)

The mythologist Joseph Campbell once wrote that Buddhists don’t dream of Christ. His point is simple: if your identity is bound up in a certain set of beliefs, you’re likely not going to be unconsciously invaded by a different figure from another set, especially if you’ve never had contact with that system.

Campbell jotted down this idea this well before the Internet, when people of various religions had much less access to different religious systems. Buddhists were much more likely to envision a Bo tree over a crucifix any night.

But do Buddhists see Christian ghosts? The concept of ghosts is universal. In Buddhism, there are even categories of ghosts. Hungry ghosts are beings driven by intense emotional desires, while ghosts as we generally know them in America—apparitions of the deceased—also exist. Taoist hungry ghosts emerge from the ether if their meat casing of a human body died violently or unhappily. In Christianity, the holy spirit is a ghost, but ancestors are ghostly too.

Though ghosts are a global phenomenon—there is evidence humans are hardwired to “see” them—Knox College psychology professor Frank T. McAndrew writes that whatever god you worship influences the type of ghost you see. Like Campbell, he recognizes prior belief influences what your eyes behold.

First McAndrew surveys basic assumptions about the spirit world. Protestants, Catholics, and Muslims, he writes, share a belief in resurrection and judgment, which eventually ends up in a heavenly realm or a hellish domain; Catholics throw in purgatory for good measure. Buddhist and Hindus, while varying slightly depending on region, put stock in reincarnation, which requires a certain waiting period in which the soul might just happen to haunt the living—their own private purgatory.

This, McAndrew speculates, allows each believer to think they’re asserting control over the destiny of their individual ether in the context of the belief system they’ve been raised in. But it turns out that this anxiety-reducing mechanism of an ever-after might actually induce a different kind of paranoia:

Religion’s talent for easing our anxiety about death may have had the perverse effect of increasing the likelihood that we’ll be on edge about ghosts, spirits and other supernatural beings.

Religious believers are twice as likely to believe in ghosts than nonbelievers—and 18 percent of Americans have claimed to have seen one surfing the air. If the believer is Muslim, he’ll likely think he’d spied a Jinn, since the concept of souls becoming ghosts isn’t prominent in Islam, whereas Protestants give credence to the paranormal. Catholics also champion these type of spirits, even as they condemn followers from contacting them through the Ouija board they purchased on Amazon.

One of the most complex assertions on the waiting period between death and rebirth is expressed in the Bardo Thodol, a Tibetan text popularly known as the “book of the dead.” While the validity of this “transitional state” is questionable, the rites associated with it are fascinating—so much so Carl Jung added commentary to W.Y. Evans-Wentz’s translation.

Jung is skeptical regarding the text’s more grandiose claims, comparing them to “the half-baked literature of European and American spiritualism.” As an interior map of archetypes and psychology, however, he is enthralled. He writes,

It is a primordial, universal idea that the dead simply continue their earthly existence and do not know that they are disembodied spirits—an archetypal idea which enters into immediate, visible manifestation whenever anyone sees a ghost. It is significant, too, that ghosts all over the world have certain features in common.

The features, which include a sort of hallucinogenic vision of a hazy figure and often relies on a “feeling” of presence rather than visual proof, are indeed experienced around the planet. As McAndrew points out, prior beliefs influence how you see ghosts and what to make of them. Their function, history, and friendliness (or foreboding nature) are all dependent upon what you previously thought about ghosts.

Which is why the concept continues to fascinate as a psychological construct. The human brain is capable of creating things that do not exist and actually seeing them in front of their own eyes. There’s a saying that life is what you make it. Turns out that death might just be as well.