Why people in South Korea are faking their own funerals

There is a new wellness trend emerging in South Korea – experiencing your own funeral. While at first this sounds twisted, in truth this ritual utilizes what other cultures have long known. 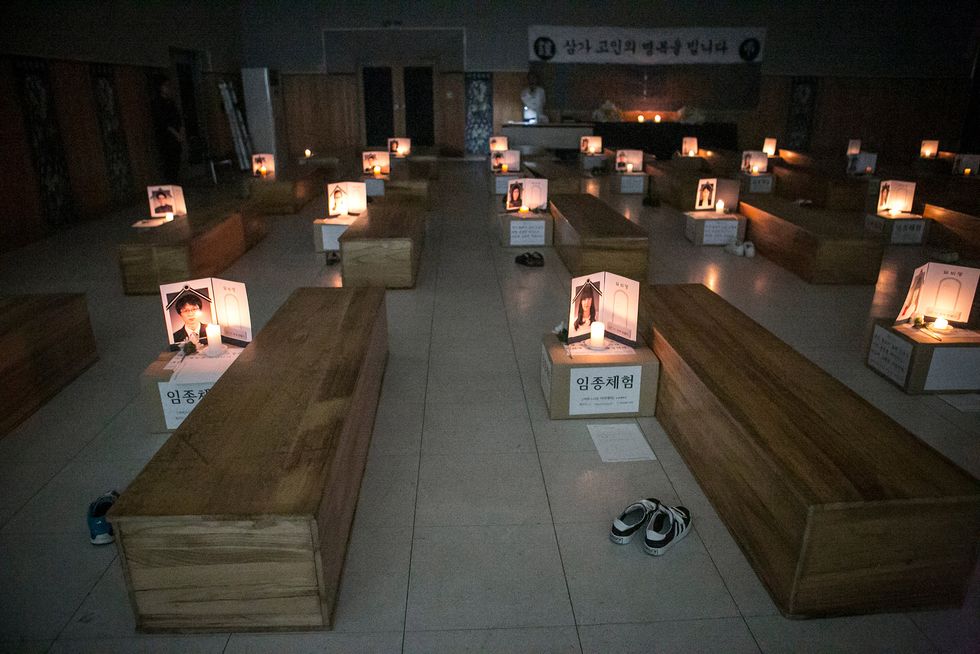 Participants think about their lives as they lie down in a coffin during a 'Death Experience/Fake Funeral' session held by Happy Dying on August 1, 2016 in Andong, South Korea. Fifty adults who work at the Andong Science College in South Korea participate

The quest for everlasting life is an old ambition. One of the most ancient surviving mythologies, the Epic of Gilgamesh, revolves around an egotistical king's journey to the plant that grants eternity. A deathless life is only subtext—the real story is the transformation of selfishness to humility—but it shows that for millennia humans have hoped to escape death, no matter how futile an endeavor it is.

Not much has changed as futurists count down to when biological aging proves no match for coding. The Silicon Valley set pops resveratrol like candy, washing them down with buckets of Soylent. Life, they speculate, is only a riddle to be answered, not an inevitable march toward darkness. Descartes wasn't in error; he was simply too early. The ghost in the machine is really an algorithm.

The refusal to decline is big business. Plastic surgeons become minor celebrities as they help the wealthy and conceited rage against nature's cruel machinery. Yet no amount of tucking and lifting slows the demise of organs. All it really does is make of the human a sad animal too proud to admit the realities of aging.

Ironically, the emotions behind injections and surgeries—envy, depression, anxiety—aid the process of aging. It's like drowning: the harder you fight, the quicker you'll succumb. It's much better to relax into the panic, which brings us to South Korea.

The Hyowon Healing Center is financially backed by a funeral service company to help people confront death. While at first this sounds like a twisted business scheme, in truth these counselors are utilizing what other cultures have long known: to prepare for death helps you appreciate and enjoy life.

Participants wearing linen shrouds meditate and reflect on their lives as they lie down in a coffin during a 'Death Experience/Fake Funeral' session. (Photo by Jean Chung/Getty Images)

Seneca believed death to be the true gift of God; unlike life, it cannot be taken away. Socrates attributed our fear of death to selfishness: we think we know what's going to happen when we actually do not, therefore to consider it evil is mistaken. The Buddha thought clinging to life is as dangerous as any other form of ignorance—to cling is to slowly and ungracefully lose your grip.

Tibetan Buddhists created an elaborate ritual for traveling through the bardo, a supposed liminal state between life and rebirth. Regardless of one's feelings on reincarnation—some Buddhists accept it, others reject it—the Bardo Thödol is recognized as creating a preparatory mindset for death to help one live well. The Mexican 'Day of the Dead' celebrations have a similar intention: honoring those who have passed to help us live. A little tequila doesn't hurt, as it turns out.

In South Korea this ritual involves journaling about your approaching death, donning burial shrouds, then lying in a coffin in complete darkness for ten minutes. The free program has been attended by 15,000 citizens in four years. Attendees have claimed a variety of motivations, from a deepening of self-awareness to alleviating suicidal impulses. A director of the program says:

Most participants say they feel strangely refreshed afterward, gaining a new perspective on the things that matter in life, like family.

Over the last century life expectancy rates have quickly ticked upwards, creating a unique issue for societies the world over: how to care for the elderly. A boom in palliative care, age-restricted communities, and the use of psychedelics are all means we've invented to ease the dying process—really, ways of living the fullest lives while still kicking.

In the Pulitzer-winning The Denial of Death, Ernest Becker believes it takes a heroic contribution to own up to the nature of life and death. Rituals are one place to engage in the speculative arc of life. To avoid this process, he writes, man is “drinking and drugging himself out of awareness, or he spends his time shopping, which is the same thing."

Innumerable distractions to mortality plague our anxious minds. As the cosmetic, capitalistic branch of science persists in developing technologies for supposedly youth-inducing modifications, humans continue to believe they can stave off death's inevitable call—perhaps the most useless ritual of futility imaginable. By contrast, South Koreans engaging in this coffin ceremony are displaying the heroic courage Becker invokes: acknowledge the way of all flesh now so that the time you spend until then is rich, fruitful, and honest with the terms.