The gun industry is in the business of selling its products. Exploiting our belief system is part of its corporate model. 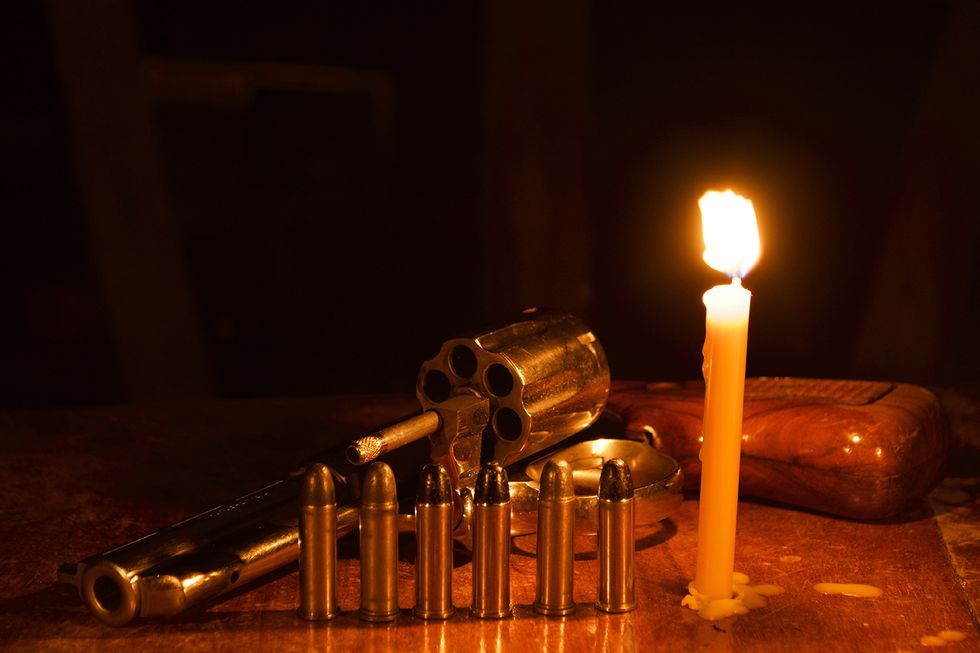 In 1964, Marshall McLuhan published his pioneering study of media theory, Understanding Media. He argued that media and not the content it carries should be studied, differentiating between ‘hot’ and ‘cool’ versions. Hot media enhances one sense alone; a detailed survey of the perimeter is not needed. Cool media requires more cognitive effort to understand the nuances being presented.

Teeth are critical to the mindset of hunters, but that is not what a growing percentage of guns are being used for in America. Vision is essential to McLuhan’s work, as it is a sense used for consuming much media. Yet the eyes are not for consumption alone; they influence our reactions to situations. McLuhan writes that ‘electric technologies’ are not extensions of our bodies as much as they extend our central nervous system. Given that vision is the gateway into our brain and spinal cord, how we perceive the world outside of us determines how we act in it.

Gerald Ung did not act well in January 2010. While to this day he cannot remember exactly what triggered a fight outside of a Philadelphia bar, he did trigger a Kel-Tec P-3AT, a .380-calibre semiautomatic pistol that Ung toted legally thanks to the state’s concealed carry law. He shot Edward DiDonato six times and was later acquitted of any crime. Fortunately DiDonato lived; unfortunately he’ll deal with a limp left foot and intestinal damage for the rest of his life.

In his latest New Yorker article (I also recommend interviews here and here), Evan Osnos reports on the business of selling guns in America. He cites Ung’s case as an example of the reverberating effects of concealed carry laws, which are now legal in all fifty states. In two decades the number of concealed-carry permit holders has increased from under five million to 12.8 million. Osnos continues,

More American civilians have died by gunfire in the past decade than all the Americans who were killed in combat in the Second World War.

The media will always focus on mass shootings. While tragic, those are not the episodes that result in the majority of gun deaths. Those occur one by one, on late night streets outside of bars, in homes due to domestic fights or accidental shootings, and simply when someone’s vision is primed for violence and so decides to pre-empt the situation. In fact, this is what happened to Ung.

When Kelly [one of DiDonato’s friends] hiked up the drooping belt of his pants, Ung suspected that he, too, might have a gun. That mistake is not uncommon: a person holding a gun is more likely to misperceive an object in another person’s hand to be a gun…

While a fringe community in size, the ‘Open Carry’ sect of gun advocates presents an even more dangerous proposition. Knowing, instead of imagining, that a potential adversary—really, who initially perceives a person walking toward you with a gun as a friend?—is armed does not hint at de-escalation of violence. The human brain simply is not built that way. Add in alcohol and anger, both which stoke and taunt the lizard brain, and the difference between self-defense and offense becomes difficult to discern.

This morning, while working on a new book about brain and body fitness, I researched the longstanding myth that breakfast is the most important meal of the day. If, upon closer inspection of that concept, the statement feels more like a marketing technique than physiological maxim, you are correct. Food manufacturers have a vested interest in you believing that what they’re selling is essential.

Which appears to be the same playbook used by the NRA and gun industry. America is experiencing record highs in numbers of guns owned concurrent with lows in the number of Americans that own one. The average gun owner has eight in their collection, Osnos writes. Most every business relies on repeat customers. Being that guns are generally built to last, you need very dedicated consumers. Inventing a mythos of the patriotic statesman warrior makes for wonderful copy. Consistently drowning us with the dangers of the world and politicians hell-bent on ‘taking your guns’ keeps your wallet open.

The myth the industry has built—the only thing that stops a bad guy with a gun, etc.—is not, like the necessity of that morning muffin, based on evidence. In a 2014 FBI study, of a hundred and sixty incidents involving active shooters, only one was stopped by an armed bystander. Twenty-one were stopped by unarmed citizens. Myths are not powerful because they’re true; their power resides in the cooptation of our willingness to believe.

Once a firearm is brought into a home, the chance of a homicide nearly doubles. Protection is transformed into possibility. As the saying goes, everything looks like a nail to a hammer. While an inherent impetus to pull a trigger does not affect most concealed-carry permit holders, the potential for an escalation of violence is inherent in the medium.

The eye sees what it has trained itself to see and inextricably binds that information with the nervous system. Sadly, as the case of Ung and numerous others exhibit, our nervous system is not the most reliable guide when under duress.

Corporate propaganda greatly influences the ways societies are structured. In one in which everyone is marketed as a potential threat, it’s difficult for some not to buy what’s being sold.