When science and ethics collide. 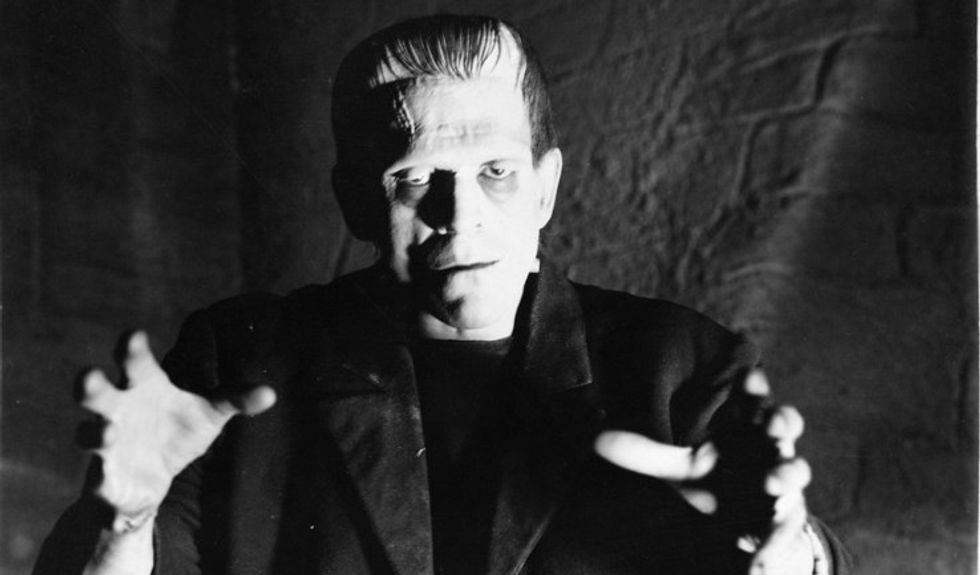 It's the 200th anniversary of the publication of Mary Shelley's Frankenstein, Or the Modern Prometheus. Which makes this a perfect time to consider the relationship between science and ethics.

The novel tells the story of a brilliant and anguished doctor who wanted to use the cutting-edge science of his time—the relationship between electricity and muscular motion—to bring the dead back to life.

We touched upon Frankenstein briefly on our recent post on artificial intelligence, the cutting-edge technology of our time that some believe will also defeat death. Two decades before the publication of Shelley's novel, the Italian Luigi Galvani had shown that electric pulses could make dead muscles twitch. He even set up a demonstration of dead frogs lined up like socks on a metal wire that danced like crazy during an electric storm. It must have been quite an eerie sight.

If life is movement, and if electricity can cause muscles to move, why not bring the two together and try to resuscitate the dead through science . . . and not religion? The novel's subtitle—Or, the Modern Prometheus—is no coincidence. Could a scientist steal the ultimate secret from God, the power over life and death? And if he could, should he?

For those who only know the Hollywood version of the story, it's important to understand that, in the novel, the "creature" is highly intelligent, a kind of superhuman being. Very different from the murderous monster of James Whale's 1931 classic.

We all know how the story ends, tragically. As Adam wanted Eve, the creature demands his creator to make him a female companion. He would then live in isolation from the rest of humanity, but not in loneliness. Horrified, Dr. Frankenstein refused. He didn't want to create a race of powerful monsters that could threaten the future of our species.

The novel examines the ethical boundaries of science: should scientists have complete freedom to pursue their research? Or are there certain themes that are taboo, and must thus be censored? If there are such taboo themes, who decides what they are? What limits should be imposed on the scientists? And who imposes them?

These are central questions, essential for our times, when genetic engineering and the digital revolution are already redefining the boundaries of our species. And they raise very complex issues. Here is an example. Should we treat aging as a disease? If so, and assuming we arrive at a “cure," or at least a substantial increase in lifespan, who would have the right to benefit from it? If the “cure" is expensive, and it certainly would be, only a small fraction of society would have access to it. In this case, society would be artificially split, where those who can afford it would live much longer than those who can't.

(To a certain extent, this is happening already, as the poor population in many countries has a shorter lifespan that those in developed countries. The problem would only be exacerbated and made more widespread. A recent study projects that, by 2040, Spain will beat Japan to become the country with the longest average lifespan, of 85.8 years. Poorer countries fare much worse, the lowest being Lesotho, in Southern Africa, with 57.3 years.)

And how would we deal with loss? If some live much longer than others, they would see many of their loved ones—possibly including their own children—pass away. Is this an improvement in their quality of life? Only, it seems, if extended longevity was evenly distributed among the population, and not the privilege of a few. In fact, many argue against living too long for this very reason, to avoid spending all these extra years mourning.

Another example is human cloning. What would the purpose be? If a couple can't have children, there are many options available, including adoption. On the other hand, human cloning may become part of the extended longevity program: imagine that our bodies and memories could be reproduced indefinitely. In this case, a person would persist in existence for a very long time indeed. If not the exact person, some semblance of her, since it's really hard to believe that all our memories could be transferred into storage devices. We don't even know what “all our memories" means, given that the memories that the brain stores and recalls change with age and are susceptible to the emotional weight associated with them.

Human cloning with memory transfer remains very much in the realm of sci-fi for now, since we have no clue how to do this. However, it is not something that the laws of nature seem to forbid a priori. To say “never" in science is very risky. With all that is happening in genetic engineering and AI research, we are clearly inching that way. It is not far-fetched to imagine that in a few decades some preliminary version of this kind of human-enhancement program will be available. And I am sure there will be many takers.

These are only two examples of the very complex issues relating the freedom of scientific research and ethics. Our initial impulse may be to forbid this or that, make sure this kind of science never gets done, that it would be a Pandora's Box that should be kept closed for good. But this kind of regulatory attitude is naïve at best. If the research is not done in one country, it will be done in another, for good or evil intentions. And even if governments ban it outright across the world, rogue groups will take it up in secret. Market forces would prevail and move things forward. After all, what could be more tempting than controlling—or at least postponing—our own death?

This is the essential point that speaks to the core of the issue: it is not science itself that is good or evil; we are the ones that choose how to use science, with good or evil intent. In the end, our ethical choices reflect the maturity of our species. And looking around at what is going on in the world right now, the prospects are not good.

The post Good or Evil? appeared first on ORBITER.