The science of genetics deals with the very small, but cannot escape the larger societal implications that are often catalyzed by its research. Genetics have been invoked (incorrectly) by the growing white supremacy movement in the U.S. in order to justify its ideas about race. In an attempt to disassociate genetics from such views, the American Society of Human Genetics (ASHG) has come out with a statement that declares the concept of “racial purity” meaningless from a scientific standpoint.

The society, which is the largest professional organization of scientists who work in human genetics, has about 8,000 members. Its statement calls the ideas of white supremacists about genetics “bogus,” “discredited” and “distorted”. The ASHG also makes a clear point that as far as the scientists are concerned, the age-old concept of race is wrong and humans cannot be split into subcategories that would be biologically different from each other.

“The study of human genetics challenges the traditional concept of different races of humans as biologically separate and distinct,” write the scientists.

The reason there is no race purity is due to the genetic intermixing of populations that results from constant migrations which have taken place all throughout human history. The constant movement of people resulted in very blurry genetic lines between groups.

And if you’re wondering whether this is something controversial in the scientific community, the statement goes on to say that the fact that there are no completely separate races is supported by decades of research, including six recent studies like the 2017 paper from the Center for Research on Genomics and Global Health, directly titled “Human ancestry correlates with language and reveals that race is not an objective genomic classifier”.

Race, according to the scientists, is a “social construct” that is derived from people self-identifying with races based on physical appearance. Furthermore, there is no genetics-based support for claiming one group superior to another, expound the researchers. 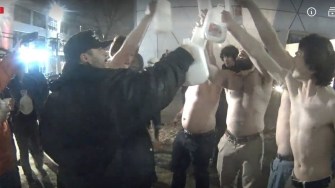 The need for actual geneticists to take a stand is driven by the spread of racial purity myths that have been soundly disproven by science. Unexpectedly, one such strange idea taking hold relates to drinking milk. Some white nationalists believe that the ability to digest lactose in milk is somehow a characteristic of racial identity. They twist genetic research to conclude that it’s a trait of white people to drink and digest milk. And if you’re not able to do it, you might as well go back to where you came from. This tends to be especially directed at people of African ancestry, writes Amy Harmon in the New York Times.

This kind of bizarre thinking led to the phenomenon of milk chugging, whereby gathered white supremacists down gallons of milk. Of course, it bears pointing out that lactase – the enzyme that breaks down milk is not specific to white people and is found in 35% of the world’s population.

Other racist misuses of genetics include the tropes of “natural” racial hierarchies – this kind of thinking was employed to justify slavery, the American eugenics movement, and the “racial hygiene” laws of the Nazis.

To continue debunking such ideas, the society of geneticists encourages its members to become more active politically and socially to “reflect their values”.

You can read their statement in the American Journal of Human Genetics.

Tags
biologygenetic engineeringgeneticsidentityintelligencepsychologyraceRacismreligionviolence
In this article
biologygenetic engineeringgeneticsidentityintelligencepsychologyraceRacismreligionviolence
Related
Sponsored
What childhood “money story” is shaping your financial behaviors?
Here are the signs that you inherited “money anxiety” from your parents.
How to fix your money trauma
Do you remember feeling “money shame” for the first time?
▸
7 min
—
with
Dr. Brad Klontz
Neuropsych
The most common source of awe might surprise you
It’s us.
Neuropsych
Psychology studies that go viral are likelier to be bogus
A new 20-year analysis of over 14,000 psychology studies finds that a study’s media coverage is negatively linked to its replicability.
The Learning Curve
Why do high IQ people stagnate in their careers? Emotional intelligence
Research suggests that emotional intelligence is more vital for success than IQ.
Up Next
The Present
Tesla had ‘historic’ 3rd quarter, says earnings report
The company markedly outperformed Wall Street’s expectations in the third quarter of 2018.