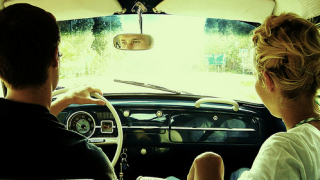 Why Your Boyfriend Won’t Look at You

Helen Fisher believes there’s an evolutionary reason for the fact that men prefer to have intimate discussions without making eye contact with their partner.

Question: What are the similarities and differences between how men and women define intimacy?

Helen Fisher: I’m working with the dating site, Chemistry.com, which is a division of Match.com.  And I’ve put a questionnaire on that dating site and 5 million people have taken that questionnaire.  Any way, about 12,000 take that questionnaire every week.  And so, about a month ago, I put an intimacy scale onto that dating site to see whether there were some gender differences, and with the different types of personalities regarded intimacy differently.  And I found no gender difference on two questions.  Ninety-five percent of both men and women agreed that they felt it was extremely intimate to go off and do something adventurous with their partner.  And 95% agreed, men and women, that having a deep conversation about the relationship was intimate.

So, I’m beginning to think that we don’t understand men anymore than we understand women.  As a matter of fact, men fall in love faster than women do because they are so visual.  Men are more dependent on their girlfriends and wives because they’ve got fewer intimate connections with other men.  Men are two and a half times more likely to kill themselves when a relationship is over, and men are more likely to remarry after a spouse has died or deserted them.  So, I think as we come to understand women, I think we are also going to come to understand men.

There’s one difference in intimacy between men and women that I think comes out of our evolutionary past.  Women tend to get intimacy out of face-to-face talking.  We swivel until we are right in front of each other, we lock eyes with what is called “the anchoring gaze,” and we talk.  And we regard that as intimate.

And men tend to sit side-by-side and look straight forward and not look at each other at all and regard that as intimate.  And I think they both come from our evolutionary past.  I think women’s intimacy comes from millions of years of holding their baby in front of their face, cajoling it, reprimanding it, educating it with words.  And so words and face-to-face contact is intimate to women.

Whereas, I think for millions of years, men had to sit behind a bush on the grasslands of Africa and keep their eye on the grasslands hoping a zebra is going to come by so that they can hit it in the head with a rock and they can’t be sitting there talking with somebody like this.  They’ve got to talk while they’re looking forward.  And I think this can complicate relationships.  You’ll see a man and a woman on a park bench and the man is talking looking straight ahead, and the women has moved every single part of her body around in order to have eye contact.

As a matter of fact, I’ve had various men in my life who talk to me with their eyes completely shut and I think it’s because it’s too intimate for them.  I mean, for millions of years men faced their enemies, they really sat side-by-side with friends.  So, one of the things that I do with a man to make him comfortable is sit side-by-side with him and look straight ahead; particularly if I’m going to have a difficult conversation with him.

Question: Is it true that men have a propensity for cheating more than women?

Helen Fisher: I’ve looked at adultery in 42 societies and you see in every single place, even in cultures where you can get your head chopped of for it.  So, there’s every reason to think that we’ve got some biological propensities for it.  Now, people say, no, to adultery.  We don’t have to be adulterous, but it’s remarkable how many people are.  And the newest data that in people under age 40, women are just as adulterous as men.  And so, I suspect that the last 10,000 years of keeping women in the kitchen and the home has – and the very strict rules against female adultery in many societies has curbed female adultery so that we think that only men do it.  But the bottom line is that every single time there’s a man who is sleeping around, he is quite often sleeping around with a woman.  And so just doing the math you begin to assume that women are probably just as adulterous as men.

Question: Do you agree with phrase, “once a cheater, always a cheater?”

Helen Fisher: I don’t think a person is always a cheater.  No, there’s always variations here.  I study personality types.  And the kind of person who is very expressive of the dopamine system, I call them the explorer, they tend to be novelty seeking, risk taking, curious, creative, spontaneously generous.  They’re the kind who will walk into a bar and buy everybody a drink, irreverent; they don’t follow the rules unless they make sense for them, quite liberal, very adaptable and flexible.  And I would guess that this particular personality type would be more inclined to adultering.

However, when you find the right person, I would guess there’s a lot of people who have been adulterous for a good deal of their lives and then they get tired of it.  They find the really the right person for them, the kind of person that will get off the couch and go straight to Saudi Arabia on vacation, or straight to Ireland for a particular song festival, or they finally find somebody who can play as hard and fast and is a sexual as they are, or they find somebody who they respect so much that they don’t want to risk it.  I do think people change.