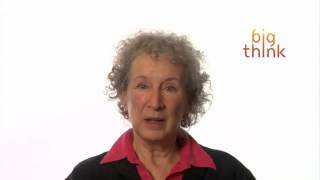 Why We Tell Stories

The art of narration may have emerged as an evolutionary adaptation, says the author. “If I can tell you that right over there in that river was where the crocodile ate Uncle George, you don’t have to test that in your own life by going over there and getting eaten by the crocodile.”

Question: Why do we need to tell stories?

Margaret Atwood: Language is one of the most primary facts of our existence.  It’s something that you say, what is human?  Well many animals have methods of communicating with one another but none of them have our kind of extremely elaborate grammar.  So it is... it’s right dead, smack in the center of what it is to be human, the ability to tell a story.

There is another theory that has it that the narrative art is an evolved adaptation on which we got in the Pliestocine because those who had it had a much greater edge.  They had a much greater survival edge on those that did not have it.  If I can tell you that right over there in that river was where the crocodile ate Uncle George, you do not have to test that in your own life by going over there and getting eaten by the crocodile.  And I can tell you all sorts of other things that are very useful to you for survival in your world if I can tell you a story.  And we know that people learn and assimilate information much more through stories than they do through charts and graphs and statistics.  You might want to back up those things with the math.  But what really hits people is the story because it’s not an intellectual thing and it’s not just a scream.  It’s not pure emotion; it’s a melding of those two things, which is where we exist as human beings.

We’re not thought machines, we’re not screaming machines, we are thought/feeling machines, if we’re machines at all, let's pretend we’re not.  We are thought/feeling entities.  In fact, some people who have done studies on it say that if you remove the emotion from the person through some accident, they have a lot of trouble making decisions because they try to reason everything out and you actually can’t.  It’s endless.

Margaret Atwood: A lot of people sing in the bathtub.  It sounds really good.  There's good acoustics in there.  But they’re not singers.  By that, I don’t mean they can’t or don’t sing.  I mean that it’s not their profession to sing.  People do not pay them to stand on a stage and make noises come out of their mouth.  So, it’s partly... it’s partly a difference of job.  We love those moments in amateur night shows, which have now become so big, like “American Idol” and “Does Britain Have Talent,” et cetera.  We just love that moment when the person steps forward who has been a garage mechanic, or something, and bursts into prize-winning opera.  We just love it.  It sort of chokes you up.  Because I think it appeals to our human-ness. This is something we all might possibly do, even if we do have some other job that we don’t like very much.  And people say that ordinary people aren’t interested in the arts are just dead wrong.  Everybody kind of is and they all do something in their life.  It’s like that, even if it’s woodworking in the cellar and knitting their own special knit patterns.  They’re doing something creative because we are a very creative species.

I think it’s Malcolm Gladwell that has a theory about how may hours you have to put in to get really good at something.  And that is why I will never, ever be a star ballet dancer.  However much I may like to leap about, I am not that person because I did not start when I was 12, or whatever it was, and put in the practice.

The Neurology of Reading